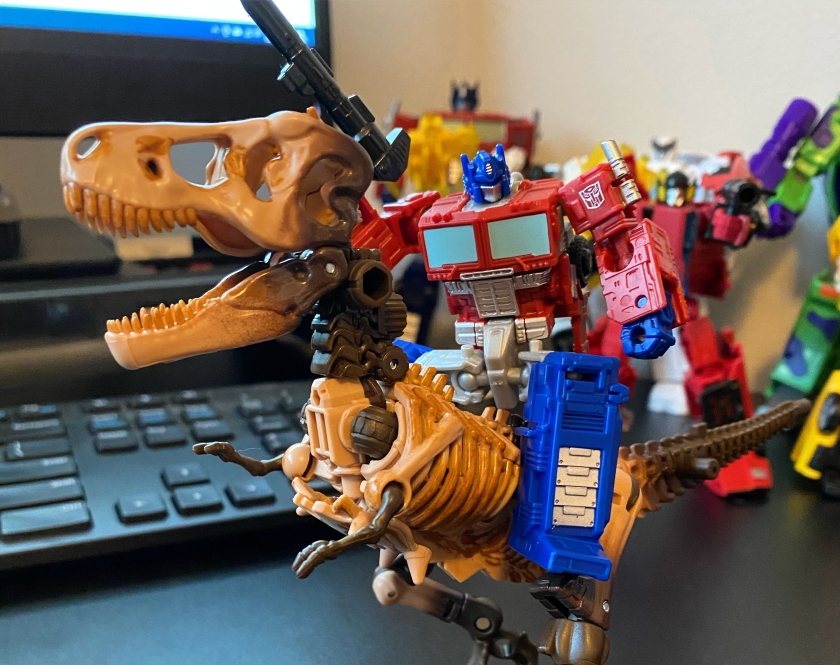 2021 is here and with it, Kingdom is in full swing under the War For Cybertron trilogy from Hasbro/Takara. Because I’m still sorting things out from the big move, this is going to be more of an OP/ED piece and I figured I’d try a “mass review” kind of thing with the Beast Wars characters we’ve gotten out of Kingdom so far.

To begin with, I do NOT feel that Beast Wars should have been included with the War For Cybertron trilogy. I feel like it’s a bit of disservice to fans of Beast Wars to have the characters shoe-horned into this line. A full, dedicated trilogy of toys should have been planned for “BW”, allowing for the Earth AND Cybertron Beast Machines toys to be designed.

That being said, Beast Wars does have a LOT of fans who have been waiting for updated takes on their favorite characters and Hasbro is clearly aiming to please them. Both the Cheetor and Blackarachnia toys are excellent examples of the true potential for these updates. Solid, fun to transform and fantastic posability is the name of the game here.

My personal hang up with BW is that I never liked the idea of the “organic” beast forms. Ravage (who I know makes an appearance) is my No.1 Favorite Transformer. I loved, LOVED that he was a robotic Jaguar (even though I assumed he was a dog back in the day). But the key here is robotic. Robot animals like Ravage, the other cassette animals, the Dinobots, Predacons, etc, are all high up on my favorites list. But organic forms seem off-putting to me and I just can get past it. Maybe it’s the CGI from the show, because I actually enjoy Beast Wars II from Japan. But the characters there are more robotic in their designs for the most part and there’s a mix of both animals and vehicles in that show.

What’s neat for the Kingdom line is that they’re adding new BW characters in the form of Fossilizers:

See here’s where things walk a thin line of balancing both my love of Transformers AND the nagging suspicion I have that I really should have gone into Paleontology.

These guys transform into Dinosaur SKELETONS. That’s something unique. And awesome. Paleotrex breaks up into “parts” for other characters to use, much like the weaponizers from the past two lines. I’ll be honest though, it…doesn’t work AS well, but it’s a fun concept and you can totally play Monster Hunter now.

It’s worth noting Vertabreak isn’t actually considered a “Fossilizer” in the same vein as “breaking up into parts” but more in the sense that Fossil Dino is also robot.

Kingdom also brought back the “legends” sized guys. Which is odd, because I thought they purposely did away with that, but two lines later, here we are. It makes sense though, as Rattrap is a small character, and if you don’t care about Vertabreak, you’ll likely care about Rattrap.

He’s also LEAPS and BOUNDS better than the previous deluxe class toy which is a total nightmare to deal with. He’s incredibly posable and scales with the other guys really well. There’s also a little Optimus Prime in Wave 1 who’s surprisingly great. He’ll go along with a G1 Megatron and Starscream in Wave 2 and I guess are intended, I suppose, for the secret/but not really cause it was leaked Titan Class coming out. (The Ark).

Then there’s the big guys. Megatron (BW) and Optimus Primal. See again, to me this is where BW gets murky and I just can’t let my “GEEWUN” brain stay quiet. BW fans LOVE this Megatron as a character. To me there’s nothing I ever liked about him other than the voice acting. I didn’t get why his entire hand was a T-Rex head who, at times, was either self aware, or would blink and respond. It was confusing and odd to me.

But my misgivings aside from the show, these two toys are incredibly well designed. Optimus transformers about the way you’d expect him to, but all of his joints are super secure and solid. Megatron involves a lot of panels, as you’d expect, but both modes are just gorgeous and because, again, they seem to have thrown the universal scale concept away, he’s a true Leader sized toy and has some serious volume to him.

It’s odd, but the toys seem to both blend well together but still remain distinctly different and I feel like that’s noticeable.

Look. Had I been in charge here *cough* Here’s what I would have done: Hasbro is clearly trying to do updates on the G1 line(s). So WFC Siege and Earthrise would have been followed by WFC: Beyond – where they continue to utilize the Galactic Odyssey theme seen in the special releases, and covered the Masterforce and Victory stuff they seem to continue to ignore. THEN I would have done Transformers: Kingdom, where they do the BW characters here, Transformers: Return to Cybertron where they do Beast Machines, and end it with Transformers New Horizon where they finish up what’s left of the BW toys they need to address. That way you get a full trilogy dedicated to the BW fans who have been clamoring for new toys and the G1ers can sit it out, or focus on the Studio Series 86 stuff (which I’ll get to, sit tight). You’ll notice I didn’t talk about Cyclonus here, who was the other Voyager in Wave 1 besides Primal. He’s a prime example of why what I laid out above would have worked a little better. I’ll be very curious to see what lies beyond Kingdom.

Obvioulsy in the end, Beast Wars is not trash. I’ll never view it as a favorite, but G1 puriest cannot deny the place Beast Wars holds in the Transformer Lore, and the importance of the series keeping the franchise on it’s feet after the G1/G2 torch blew out. An entire generation of kids grew up with THESE characters being their heroes and villains. They deserve updated toys as much as anyone else does. Except for the Unicron Trilogy, they can just get out. KIDDING!

More to come! I’m finally getting to the point of having my collection starting to get set up and can try and get back into the rhythm of posting more here.