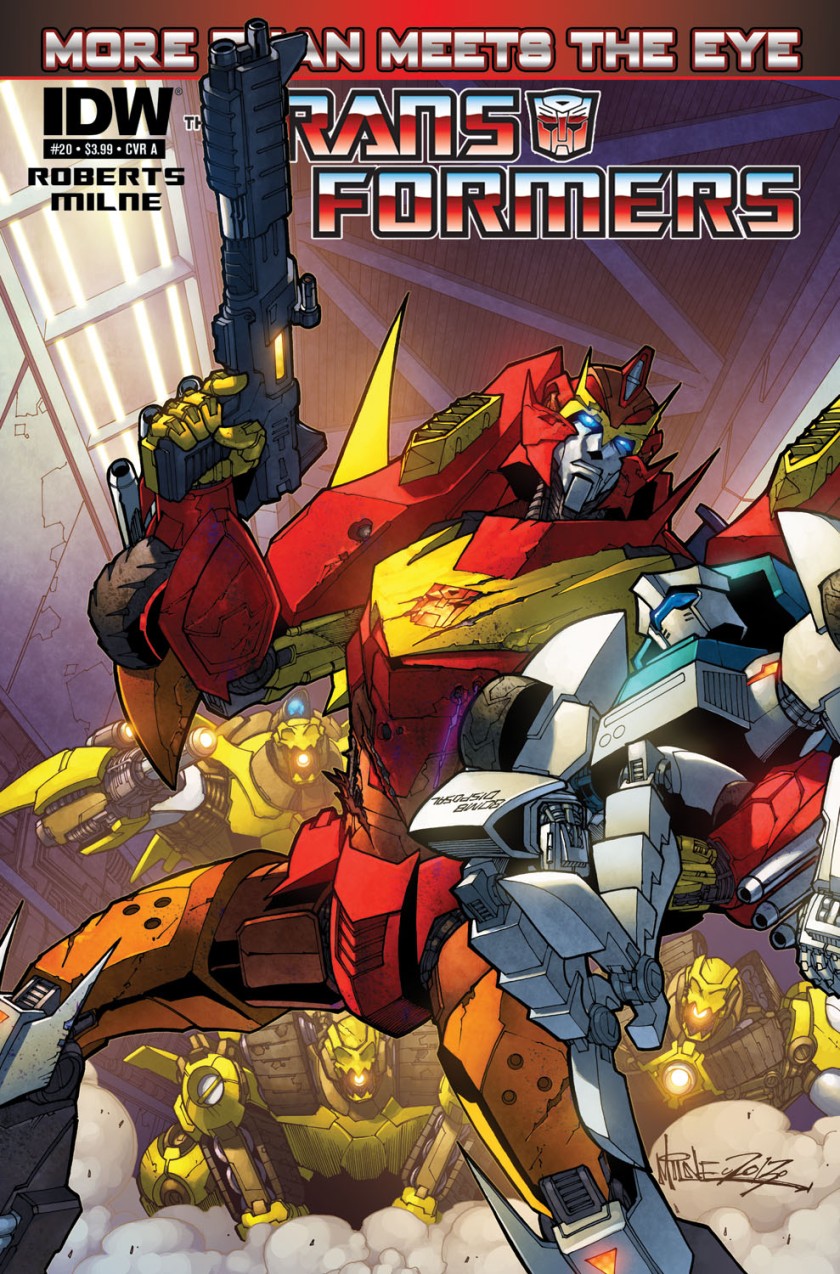 Well True Believers, if I can say that without getting sued, here we are with the first Pax Cybertron comic review.  Through these reviews, we’re going to be taking you through the latest Transformers comic issue; hopefully without spoiling the whole thing – we want you to actually read the book!  So, without further ado, let’s get started.

More Than Meets The Eye 20, the penultimate issue of Remain in Light – the story arc that will end the first “season” of More than Meets the Eye and lead us into Dark Cybertron – has been released at last!  The issue continues the series-long build up of revelations and new mysteries that form the hallmark of James Roberts’ stint on Transformers Comics.

The issue begins with a brief reminder of the events of MTMTE 19.  Minimus Ambus, or Ultra Magnus, is still dead.   Rodimus and certain crewmembers from the Lost Light are still trapped in a cell.  Ratchet is working on the bisected Ambulon.  And Whirl and Cyclonus are still doing what they do best:  killing things with reckless abandon.

The issue then proceeds to resolve one of the series’ long standing mysteries:  why exactly is Skids’ memory blank.  Roberts relies on Getaway, Skids’ partner, as an effective narrative device to both fill in the blanks about Skids’ missing memory, and to give some more color to exactly how crazy Tyrest has become.  Fresh with the knowledge of who and what Skids is (I won’t spoil it here), and exactly how James Bond villianesque Tyrest has become, Getaway proceeds to break Rodimus and his merry men out of their cell.  Rodimus then begins on his collision course with Tyrest.

While Rodimus and his crew are facing the exposition of doom, Ratchet is facing his own crisis.  Pharma, the mad doctor of the IDW universe, has sliced Ambulon in half and assured Ratchet that all the tools necessary to “fix” Ambulon are in the med bay where Ratchet and First Aid are being held captive.  Ratchet, however, has other plans.  Roberts then shows us that even if he isn’t the most talented doctor in the universe, he is the most badass.  Spoiler alert, Ratchet is able to escape and he meets up with Rodimus to face the final boss in his lair.  Oooh, it’s all so video game.

While Rodimus and crew are making their way to Tyrest, outside the building the Riggs and Murtaugh (c’mon, people, it’s a Lethal Weapon reference.  It’s a classic.  Just see it, you’ll see it works) of the IDW universe, Whirl and Cyclonus, are cutting a path through a series of nameless robots.  Cyclonus is on a quest to find the equipment needed to save Tailgate.  Whirl is crazy.

The issue culminates with one big death, and Tyrest launching his master plan.  We are left with one hell of a cliffhanger as we wait for the final issue of Remain in Light, which lands later this month.

The issue itself is a nearly perfect blend of action and exposition, and serves to move the story forward immensely.  Roberts’ dialog makes even the somewhat lengthy exposition pages enjoyable.  And, as readers of More than Meets the Eye certainly know, we are always rewarded for making it through large swaths of text with a big character moment.  The issue itself also shows a fair amount of Roberts’ wit; even in the face of ultimate destruction, Roberts is able to script in a visual that makes you chuckle.  At bottom, Roberts’ voice shines through the issue.

Perhaps most interesting, though, is that even with Tyrest’s grand arc taking shape (and Tyrest’s near victory all but assured), Roberts puts relationships front and center.  We see real development in relationships between Whirl and Cyclonus and with Ratchet and First Aid.

Moreover, the issue never lets you forget that it’s friendship and fellowship that drives these robots to take extreme measures to save the day.  Indeed, Cyclonus’ need to get to the medical bay in order to save Tailpipe is a haunting reminder that even in the face of absolute war, camaraderie is the most important characteristic.

Roberts drives home the personal apects of the Cybertronians at the end of the issue by taking us around the Transformers universe to show us the effect that Tyrest’s plan has on all the other Cybertronians (including an amazing moment with Soundwave that was simply put one of the most moving moments in any comic book in recent memory).  The manner in which the Cybertronians relate to each other can only be described as human, which is a true credit to the writer.

The issue is brought to life by the incredible art of Alex Milne, who deserves hazard pay for having to draw some of these complex pages.  Milne, however, brings order to a chaotic story, and does it with a style that we have come to expect from him.  Milne’s art continues to improve.  Nowhere is that better seen than in the facial expressions of the ‘Bots immediately after Tyrest presses the irreversible button of doom.

More Than Meets the Eye is an amazing book, and does exactly what the penultimate chapter in a series should do:  it makes you rabid for the next issue.  This is not the place to start reading More Than Meets The Eye:  you should go back to issue 15 if you are looking for a good jumping on point.  But by all means, you should be reading this book.  Roberts has elevated the writing of More Than Meets The Eye and set a very high bar for the last issue.

Let us know how you felt about the issue!  We will see you here in a few weeks for our review of Robots in Disguise 21!  Until then Make Mine IDW (again hoping not to get sued).