Back in 85, the my brother and I tried to collect all the Stunticons.  In the end, we ultimately met our goal, but only after my brother received Motormaster for his birthday.  Being so close in age, this was actually a terrible situation for me, seems he had the full set, and could now form Menasor, where as I was left with only Breakdown, Dead End and Drag Strip.

…..ah well..
As my first “customization” project, I’m going to attempt to replicate a more updated version of my favorite race-car baddies using the much cooler Classics-Generations series.

Starting with the OTHER Stunticon I never had, WildRider:

Before KO Toys went out of business, I was able to pick up the “Do it yourself” SideSwipe kit, in black.  I was originally going to do a G2 version of Swipe, but when the kit arrived, they had thrown in all the various heads HasTak has used for the mold, including the head sculpt for G2 Breakdown given out at BotCon a few years back.  Well, while the head wasn’t perfect, I technically re-purposed another figure as Break Down, so I thought I’d make Wild Rider here. 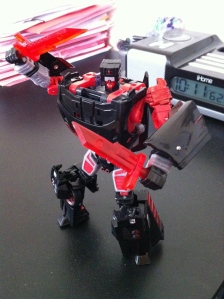 Here he is in robot mode.  I actually sacrficed my Red Alert to get some spare parts as the DIY kit was GOD AWFUL in quality.  (also, don’t mind the background, future projects will be taken in my mock-studio) – I gave WildRider two energon daggers from the 3rd part Head Masters “Butcher” kit.  I think they work well with his red limbs and such. 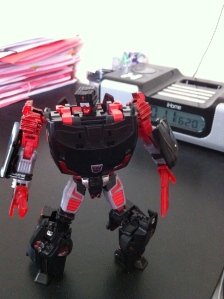 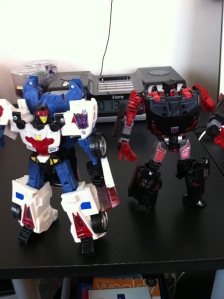 And here he is next to “Break Down” (Wal-Mart exclusive Breakaway) – at first, when it was just going to be these two, the size difference was fine, but now that I’ve decided to do the entire team and possible Gesalt combination, he just wont’ work, he’s too big.

Here’s Alt-mode for Wild Rider followed by a side-by-side with BreakDown.

So there we go – I’m happy with how Wild Rider turned out, but because I didn’t actually paint him the way I would normally paint something, he suffers from scratches quite a bit.  Coupled with the horrible quality of the kit, I need to take a lot of precaution when transforming him.

At this point, I’m going to start working full force on this, I have all 5 figures figured out for the team:

Drag Strip – I just bought Universe Drag Strip – he arrived today, so I’ll post on him this weekend.

Break Down – I just bought a cheap Classics Rodimus for like 10 bucks on Crave – so I’ll repaint him and replace Break Away here.

Dead End – I Picked up a relatively cheap RTS Jazz, and that’ll require some mods to the head, and a full repaint.

MotoMaster – I had trouble figuring this fella out…but it turns out I have some great ideas for using RTS Grappel, which will be a strong enough figure if I go ahead with the combination aspect (which I think I will).

– Aptkane (Till all are one)