Well, as luck would have it, ALL of my Asia Exclusive Legends class guys came in today.  There are only four in this wave, I picked up everyone but Thundercracker, as I already have his deluxe class, and I’ll get him in the US Wal-Mart exclusive.

As usual, these guys are all repaints of previous releases.  The original figures were Trailbreaker, Optimus Prime, Prowl and Starscream.

Lets start with Motormaster.  Techincally, because Hasbro lost the naming licence for Motormaster (*sigh*…who did they lose that too?  Dummies…) – His name is Motorbreath.  Which is the dumbest name ever.  But it doesn’t really matter,  because he’s Motormaster and he’s a cool little guy:

I never had Motormaster, but I was always crazy jealous of my older brother who had him with the full set of Stunticons.  I’m glad to have him, even if he’s a tiny legends class figure.  What he needs though, is a trailer.  He looks odd without one.  (ahem, get on that 3rd party guys….)

In robot mode though…

He might as well have been called Nemesis Prime.  I mean, he’s a spot on for Nemesis, but there’s like 1000 Nemesis Primes out there.   Like all legends, he’s super small – here’s a size comparison with G1 Bumblebee.

Next up – we have Bluestreak –

Like every Bluestreak before him, all the way back to G1 – he’s a repaint of Prowl.  I forgot to take a picture of him with Legends Prowl, but believe me, he’s Prowl.  But that’s a good thing.  Legends Prowl is awesome, especially his head sculpt.  And seems Bluestreak uses the same head;

Bingo – you have a good looking Autobot.

His car mode is just as nice – very sleek:

You gotta love the Tampographed Sigils that these guys sport.  Very vibrant.

Finally we have Hoist.  Hoist is a medic and a maintenance guy.  OH, and he has a visor! 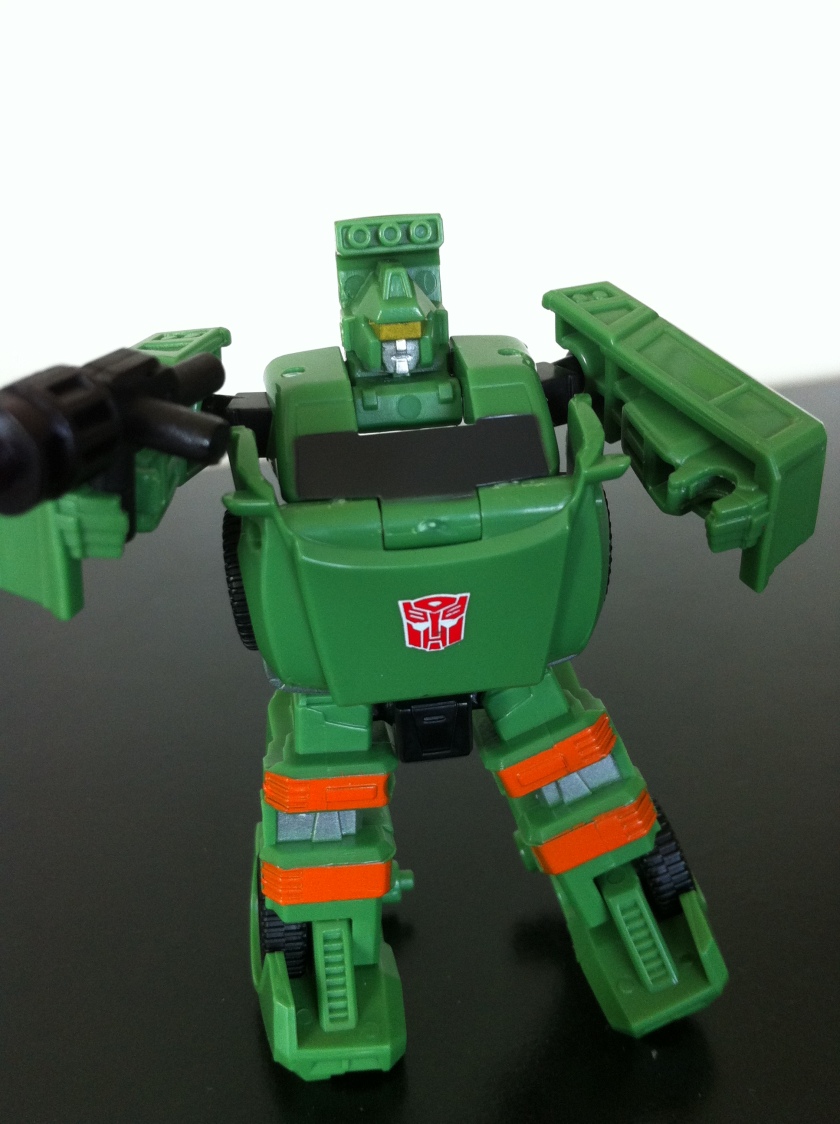 He’s also Green and Orange…one of my favorite color schemes for a robot.  He’s a bit on the “chunky” side and he’s in dire need of knee joints, but of all three figures I really wanted Hoist the most.  His alt-mode is quite nice too!

One awesome aspect to these guys is that they all come with weapons.  Legends class figures don’t normally come with any kind of accessory or weapon so its pretty awesome that they added these on.

For the life of me, I really don’t get why Hasbro would limit their market by ONLY releasing these guys to the Asian Market.  I’m pretty sure these guys would go like hot-cakes in the West/US so I’m a bit baffled, but very happy I was able to pick these three up.  I’ll post on ThunderCracker once the Wal-mart exclusive hits shelves (and holy crap, that also comes with a new Deluxe Jazz in G2-esque colors!  WOOOOOOOOHOOO!)

Finally, here’s a size comparison of all three with G1 ‘Bee:

More loot is en-route, including TWO Asia Exclusive Deluxes, Swerve (GunRunner, I’ll explain that later) and CliffJumper as well as a FansProject Steel Core later in the month as well as SDCC Bruticus and HOPEFULLY Fall of Cybertron Deluxes will be in stock by next week.

Big month for Transformers – my wallet needs a vacation!