The Masterpiece kick continues I guess.  Up next, and following hot on the heels of MP Rodimus is MP-11 StarScream w/ Coronation gear.

Its funny, but now that I think of it, both of these Masterpieces hail directly from the Transformers Movie!  So I’m currently listening to “The Touch” while I type this, lol.  Anyway, on to ol’ ‘Screamer here.  Now, as many of you know, this mold was slightly retooled with some changes made to the head sculpt (way better in my opinion!), the leg assembly and the center chest construction.

As you can see, the wings have also been retooled so that the rear panels stay on the legs.   You can see the coloring is very bright as well, more cartoon accurate than usual. 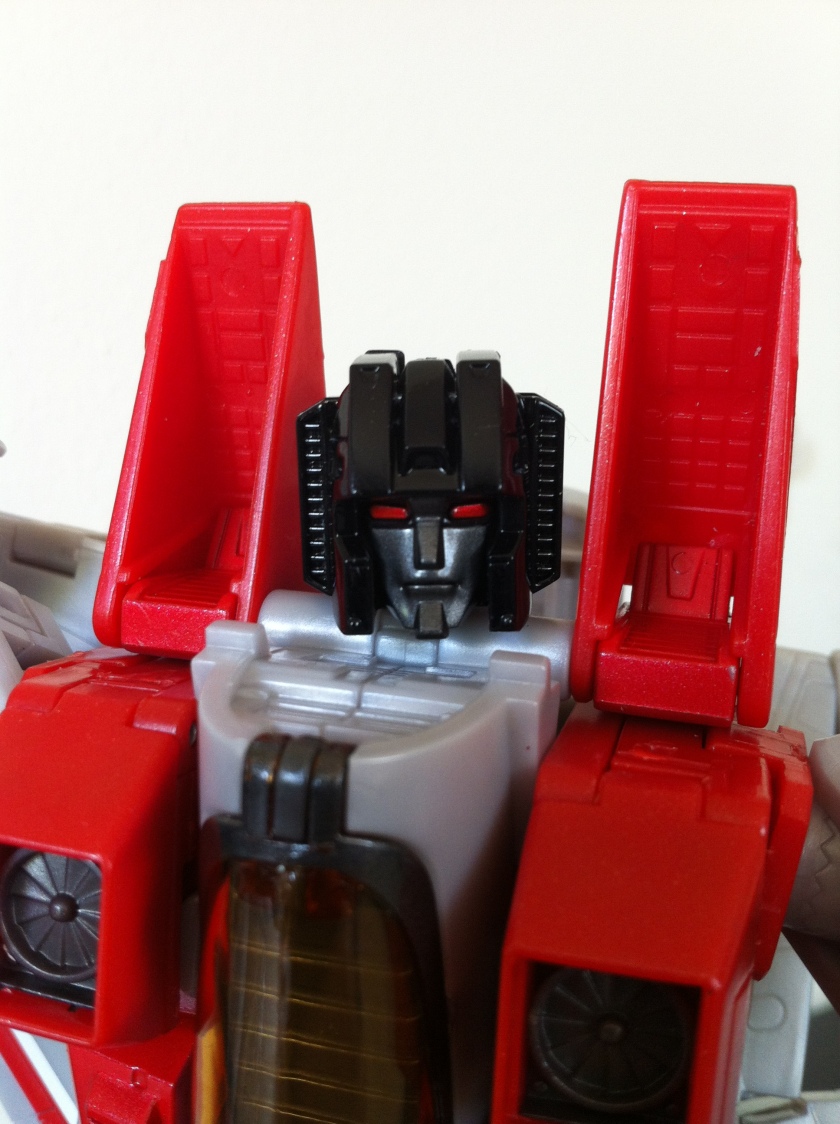 I’m not going to lie, I basically bought this guy for the head sculpt alone.  The old MP head sculpt was a bit too thin and rectangle like, whereas the new sculpt matches the animation model much better.  Plus his “skin” is a dark steel color which really makes his eyes stand out.

Naturally, he maintains the great articulation as before, so a wide variety of great poses can be accomplished with a little “fiddling” around:

A very welcome change is the wing hinges have been fixed, allowing for the “butterfly wing” movement.

The Null Rays have been attached with a new fixture, ball-jointed so they can be posed without getting in the way.

Panel detailing is still abundant, though because of the lighter grey it can be tougher to make out from a distance.  He maintains his hidden missile pods as well, but the paint aps look kind of…sloppy.

Of course, the main reason to get this StarScream is for the coronation set he comes with – its funny, its based on a 1 minute scene in the movie before ‘Screamer is blasted into oblivion.

I never thought I’d say this but, the cape and crown look AMAZING.  I always thought it was dumb for a Transformer to wear a cape, but because it’s double jointed in the center,  you can spread it out or collapse it in and it really does look amazing.  The added shoulder pads complete the whole look as well.  I really should have taken more pictures of this, lol.  Oh well.   Also, you can see he can still hold Legends Megatron as the old molds could, which is a HUGE bonus!

Jet mode, there’s not much different: 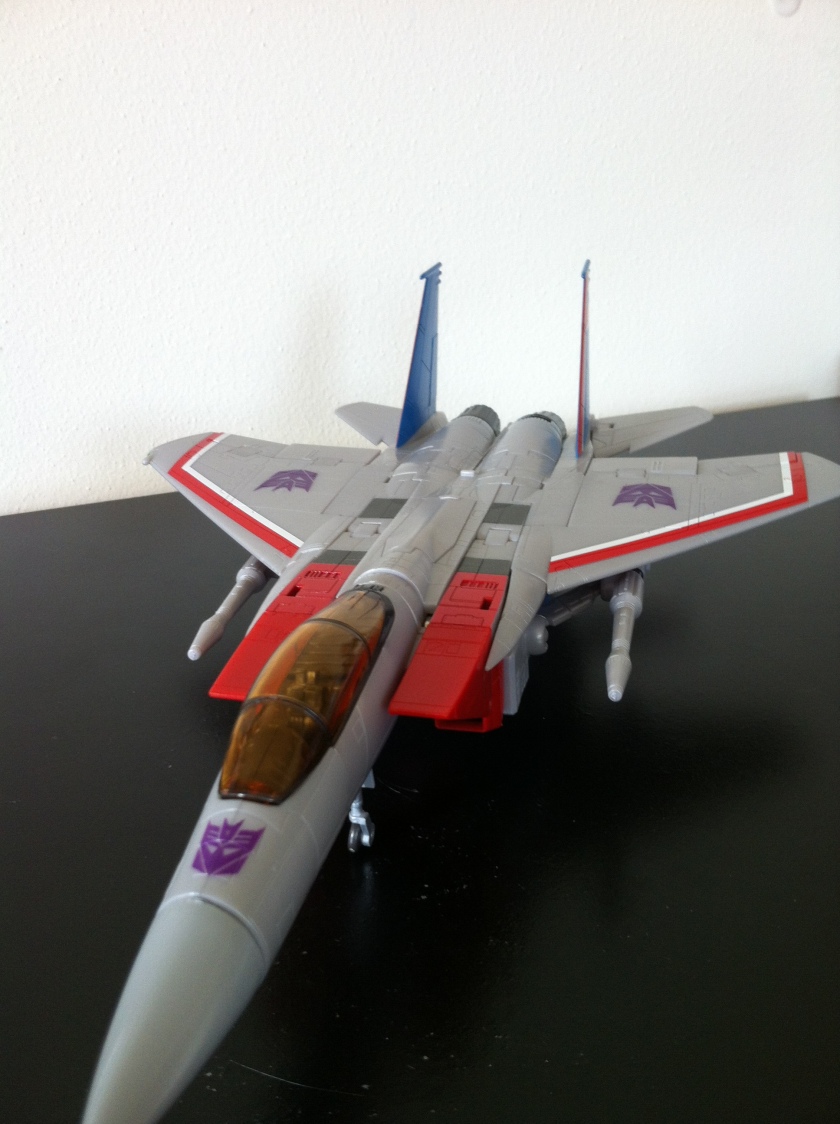 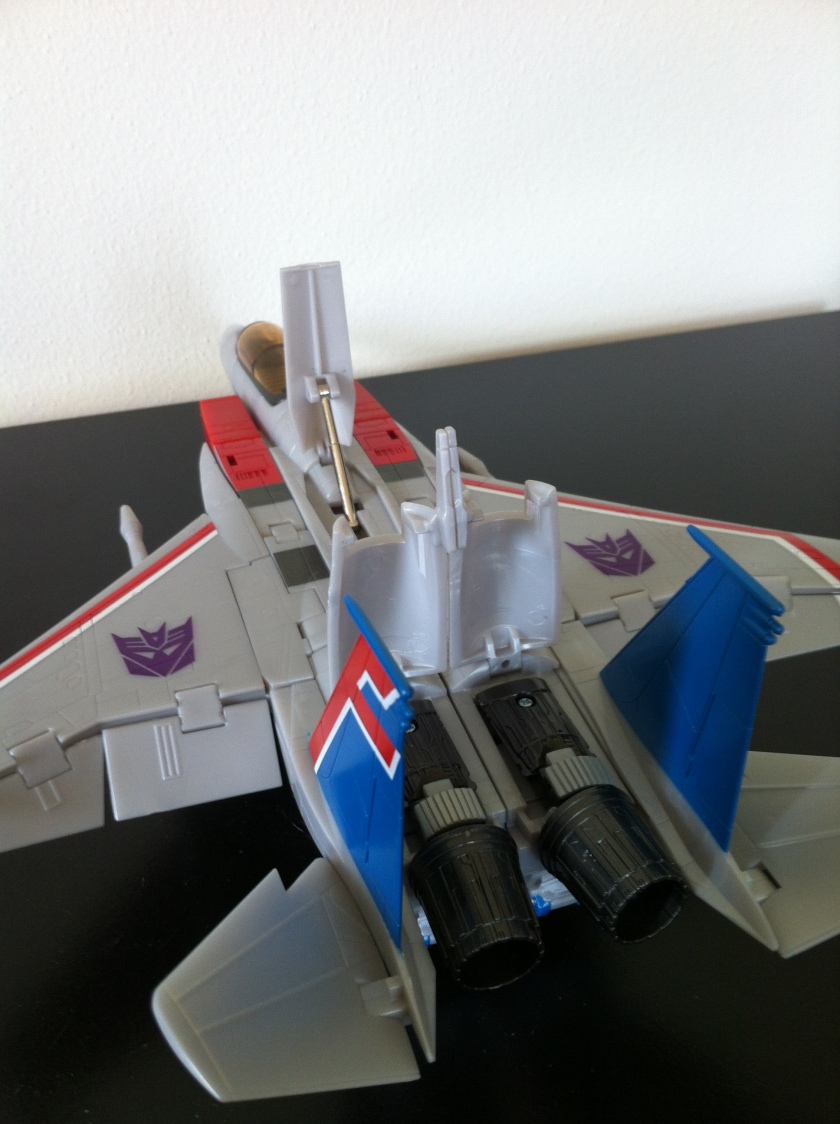 They also replaced dumb ‘ol Dr. Arkaville with a holographic pilot, which I think is pretty cool:

Finally, here’s a size comparison shot with Prime and Hot Rod.  I couldn’t fit Grimlock in, but you get the idea:

So there we go.  Over all, StarScream is amazing, and I really like the changes they made to the mold.  The only down side I’ve noticed is that the center chest assembly doesn’t really lock into place.  Kind of an odd issue to have, but I can over look it.

More coming in this month, a lot more.  Plus I’m still hunting for the 2012 Generations FOC deluxes, but so far haven’t found a thing.