Well, as a quick break from Transformers, I have to post on this little gem I picked up from eBay: 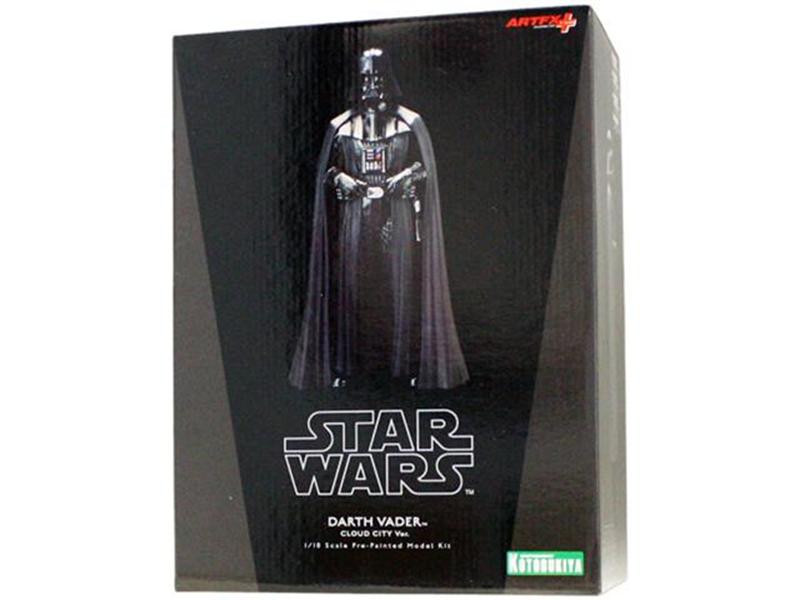 I’ve had some past experience with Kotobukiya during my Gundam works, but I didn’t realize this line (these lines) even exist! ArtFx+ is a smaller scaled set of pre-painted, “peg and place” model kits. Vader took roughly 30 seconds to assemble!

There are various series of similar statues through Kotobukiya, including, bigger, 1/7th scale Star Wars dynamic pose statues, but for the price I paid (about 50 bucks), this line is AWESOME.

I mean, look at the details on this guy!

Look, I can paint Gundam kits like some of the best of them but I can’t paint figures or statues to this extent at all. Check out the chest and head!

Vader comes with two stands – the basic magnetic stand (Art Fx statues all have magnets in the feet to adhere to their enclosed stands) and this Cloud City walkway stand, which is designed to hold him and Boba Fett (who I’m tempted to buy as well!). He also comes with an alternative left arm that is slightly pointing from the infamous “No Disintegrations!” line when addressing Boba Fett in Empire. I would have liked an alternate right arm with his light saber held at low for the opening of his duel with Luke, but you can’t have everything I guess, lol.

In this particular line Kotobukiya has released Boba Fett (ep. 5, this Darth Vader (ep. 5), Storm Trooper 2 pack-who must be rare seems they run nearly 4 times as much as Vader. Slated for Early next year is Ep.VI Vader with his light saber at the ready and removable helmet.

It’s a cool and afforadable line and I look forward to some more releases! I would like to get Empire or Jedi Luke for sure!

This will be my last post until my Tri-pod comes in, which should be in a few days. I have a lot of posts queued up and some new stuff coming in including Perfect Effects Scouting Force that I nabbed today on the cheap (thanks EBAY!).

Edit: I’m trying a new posting method on this, so please forgive any “glitches”. If this doesn’t work out, I’ll go back to my old method.