IN THE MEANTIME – Holy Cow, Reprolables!  Check out what they did to Jazz!

When I first saw the set, I was underwhelmed, but now that I’ve put them on, I can’t be happier.  I mean, the visor alone is worth the price!  (Note: I touched up Jazz’s waist section with silver, he was just way too white).  With finer details here and there, Reprolables knocked this one out of the park!

The added “glowing” details really help give this figure a lot more life!  I mean, the headlights alone help a TON!  Abdomen detailing as well as Thruster detailing on back are just icing on the cake:

Even the added ankle details, while minor, improve the appearance –

In alt-mode, however, that’s where this set really does some magic:

I still don’t get what the C – is supposed to be, the most common thought is cybertronian “4” but there’s no explanation.  Anyway, the biggest additions are the windows, which look FAR better than the plain old white.  Wheel covers are brighter red, but remain somewhat unchanged (you could probably skip them if you really wanted to) – but really, its the G1 Styling that wins it:

While entirely optional (the main set doesn’t require the G1 striped, they’re just an added bonus)  – I think this is where the set really comes to life.  Jazz becomes so much more reminiscent of his Original design.

Finally, they added the tail lights to the rear as well:

What a nice touch, even though the hands are still there, plain as day, lol.
Now, I can see the argument that these shouldn’t be necessary, and that its adding cost to an already expensive figure, but it’s still cheaper than getting the Takara version and really, if you get none of the other FOC sets, this is a MUST have for Jazz. 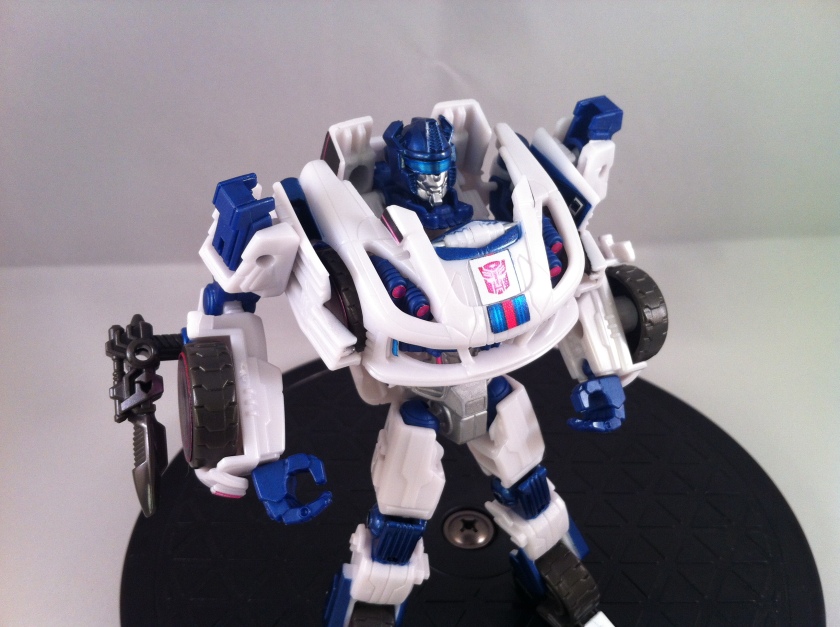 You can order the set here!

I’ll be posting on the other sets as well, and SG Soundwave too, so Stay Tuned!