Let me be crystal clear here: I love this toy. Fall of Cybertron Soundwave is by far my favorite figure this year, even above the Combaticons.

The box art for the first time, falls short of the actual figure (especially Laserbeak..) but the back still has the tech specs and such:

I kinda wish they would have given Laserbeak his specs and bio though. Oh well, lets take a closer look at ‘ol Mr. Awesome himself: 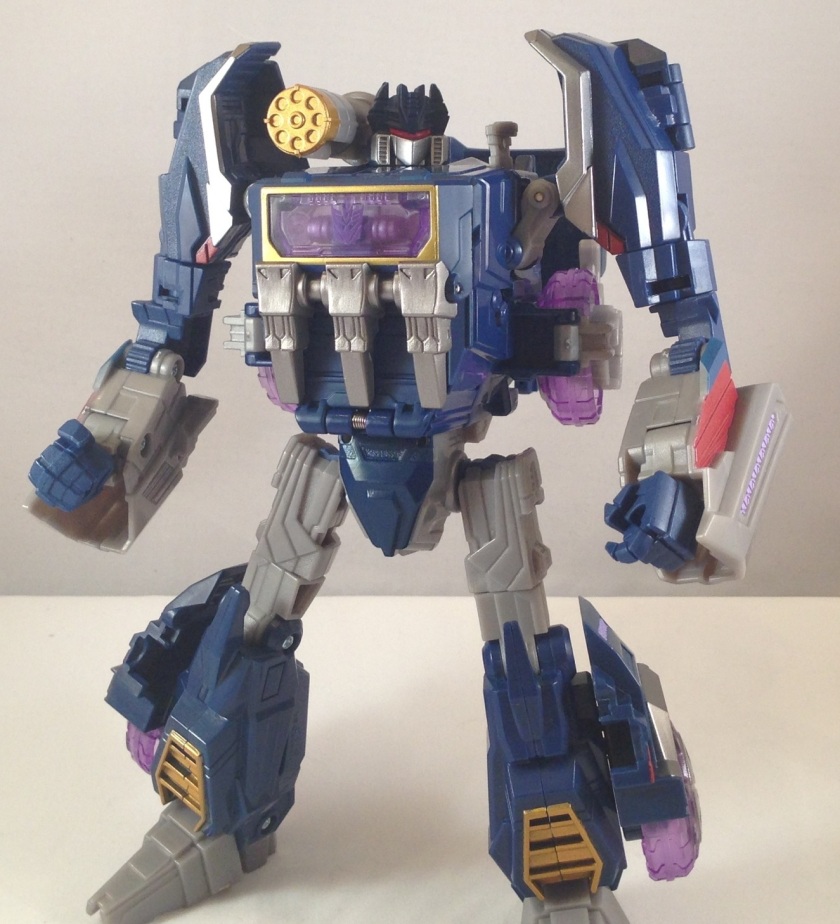 I love the proportions so much. He’s bulky and beefed up and looks barrel chested and imposing. So awesome. Of course Hasbro botched one thing which is kind of goofy: the “Optimus” gun all his pictures show him with: yeah, he actually has NO gun. Just his shoulder launcher. Obviously Hasbro used generic photos and planned on photoshopping details. Oh well. I’m assuming a 3rd party company will resolve the issue. Or a spare G1 Soundwave gun will work too!

The head sculpt is outstanding!

And the light piping works very well, creating a nice bright visor. I absolutely love the inner chest detailing as well. It’s a great touch and shows the detail through the chest door perfectly. I really like the muted blue too. The metallics stick out so much more because of the matte of the blue.

Articulation is quite decent too. As a voyager class, he’s got all the right movable joints. The head is only on a swivel though, and there no waits swivel, but those are both minor in the overall quality. His joints are all nice and sturdy and both elbow and knees are ratcheted. 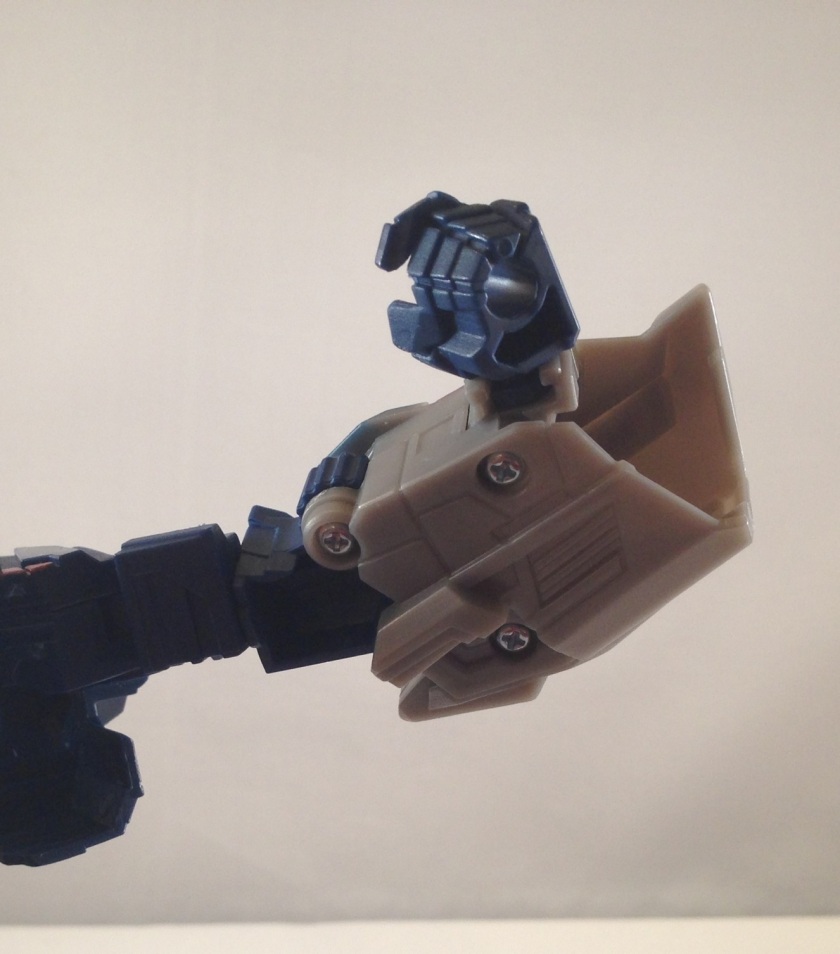 The wrists are quite flexible too, but beyond that, they gave him an EJECT finger!! Don’t get confused, this isn’t a trigger finger for his non-existent gun, it’s for this: 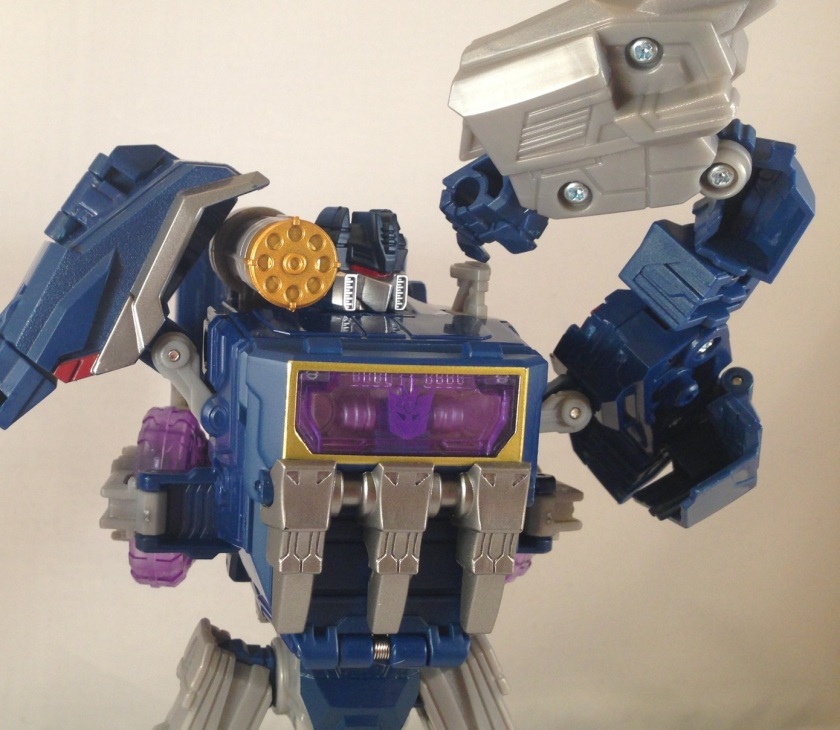 It’s a little awkwardly positioned for the picture, but you can get it perfect if camera angles aren’t an issue.. That grey tab he’s about to push sure as shoot does this:

Yay!!! A Soundwave that can eject his own tapes!! Now as biased as I am towards this guy, I’ll be honest as well, the disc eject gimmick is terrible. The discs fit in very tightly and snag when popping out, requiring a lot of pressure to pop them out. Which brings us to the other issue with the gimmick:

This whole back panel and assembly is how the discs are pushed out. Soundwave can store up to three discs in his chest but with all three, this thing sticks this far out. I don’t mind it, but it does look kind of weird considering it looks like this when empty:

I usually stick to just one disc for display (and yes, that’s Soundblaster) 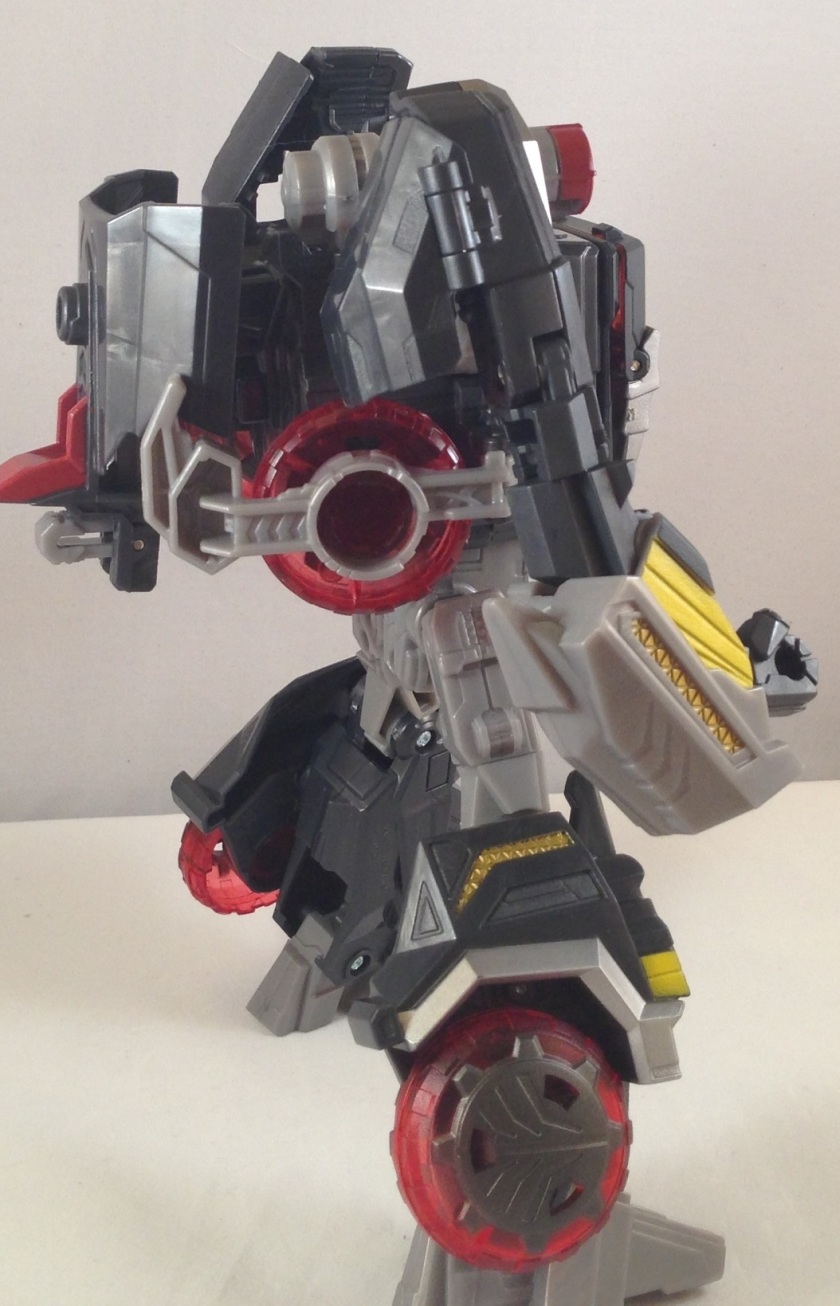 Still, even with three I love that he holds his discs! Speaking of which, another feature I adore, and one that’s kinda under appreciated in the reviews I’ve seen, is that the front panel also opens outward, as a “mock” chest door for display purposes. I mean look how good this looks!

It even opens enough to rest a disc in the space like its returning or ejecting! 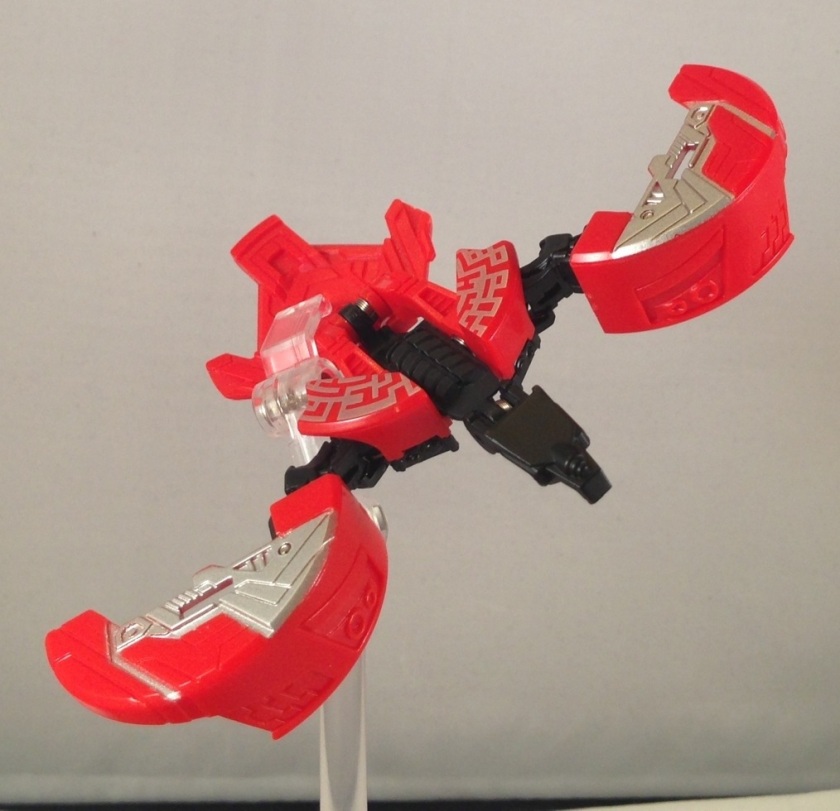 And speaking of discs, I LOVE Laserbeak too. His detailing is really quite awesome. If you look closely, you’ll see they molded the vents of his blasters into his back. The barrels of his blasters appear near his neck (though they’re pretty small details).

His head sculpt is awesome too! Very G1 but they gave him his little beak camera/laser too, which I love! I was so worried his neck would be all long and goofy like the box art. The only issue is that Hasbro didn’t paint his eyes. An easy fix by reprolables or any yellow sticker could be cut to shape too. He’s a great addition to this awesome Soundwave. 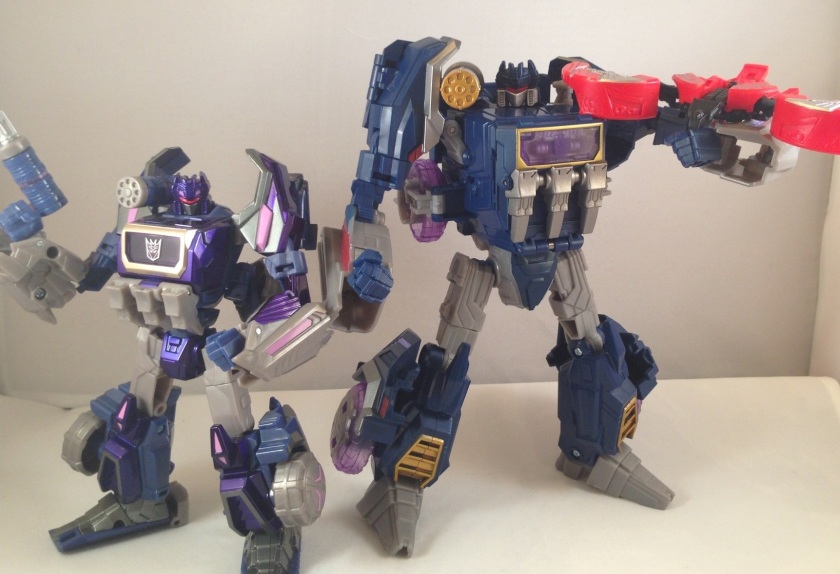 There are some strong similarities in the mold, especially the Transformation.

Still not sure what the chair is supposed to be. The discs can still eject in truck mode:

Of course, the big question is always “can he form his boom box mode from the game?” Well…yes. Yes he can. 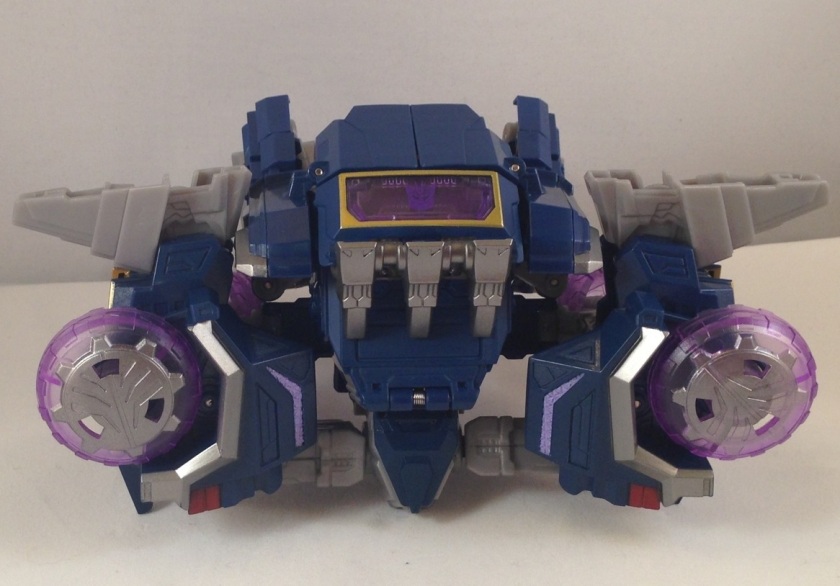 I forgot to fold his feet up, but you get the idea. The eject door works as well: 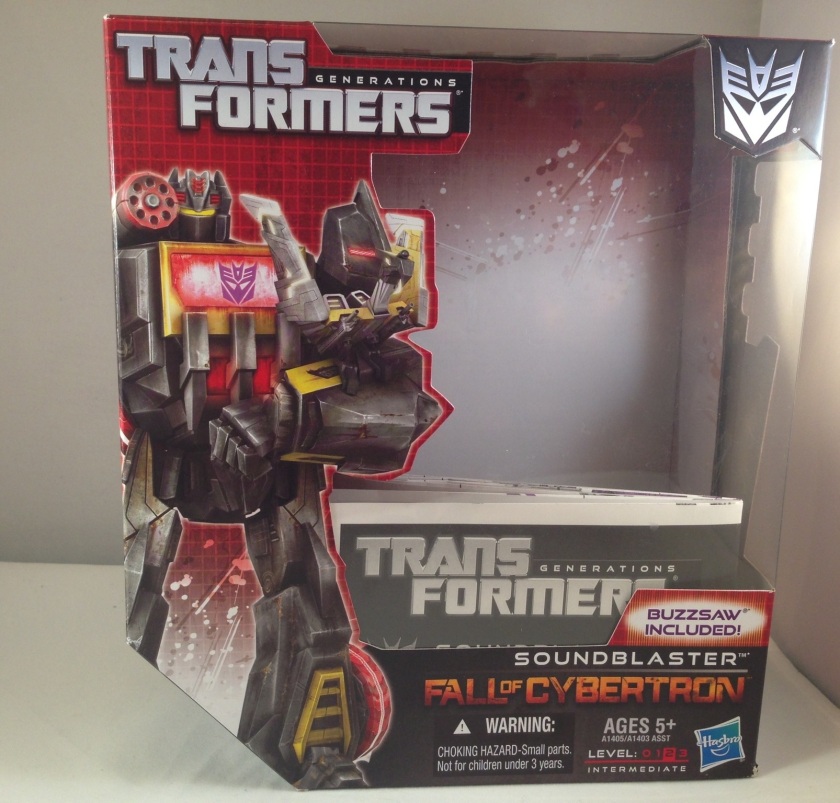 Like all Soundblasters, he’s a black redeco of Soundwave. In this case though…he’s a bit more on the Grey side, but that’s just fine in my book. 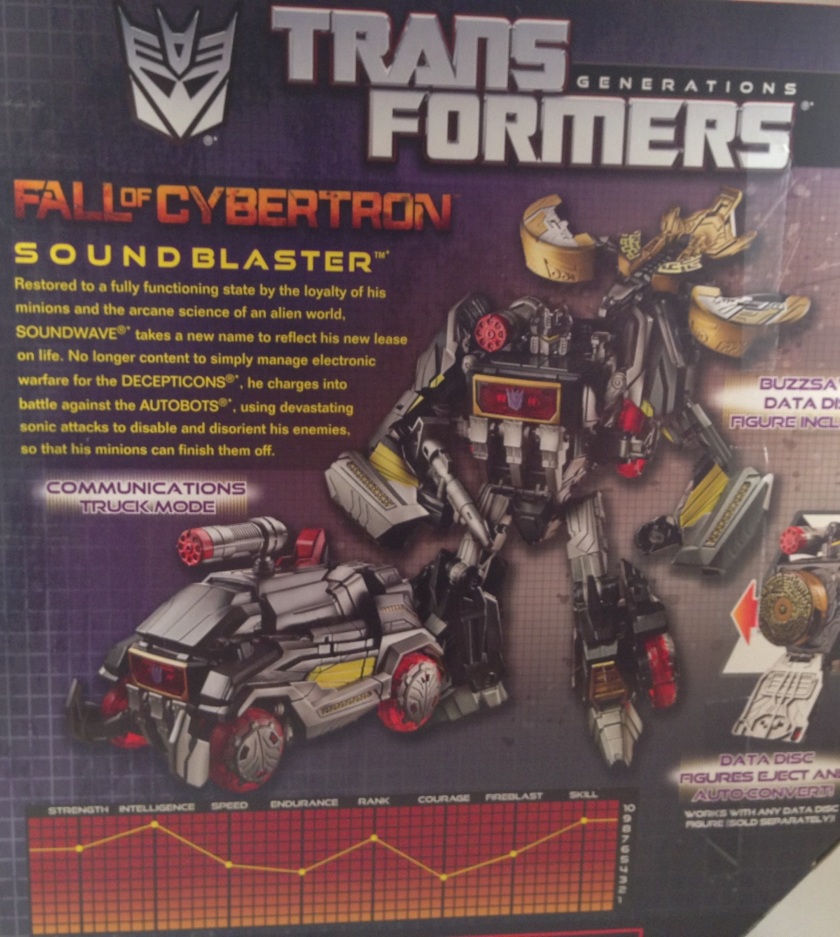 A couple of things to point out on the back: first, his bio is awesome and even gives a wink to fans of The Headmasters where Soundblaster first appeared. Second: I’m pretty sure they used the Takara picture here. He’s much darker, almost glossy and Buzzsaw is gold chrome, which as we’ll see, he is in fact not.

Still…Soundblaster is quite purty. With his black, yellow and reds, he’s a nice foil to Soundwave: 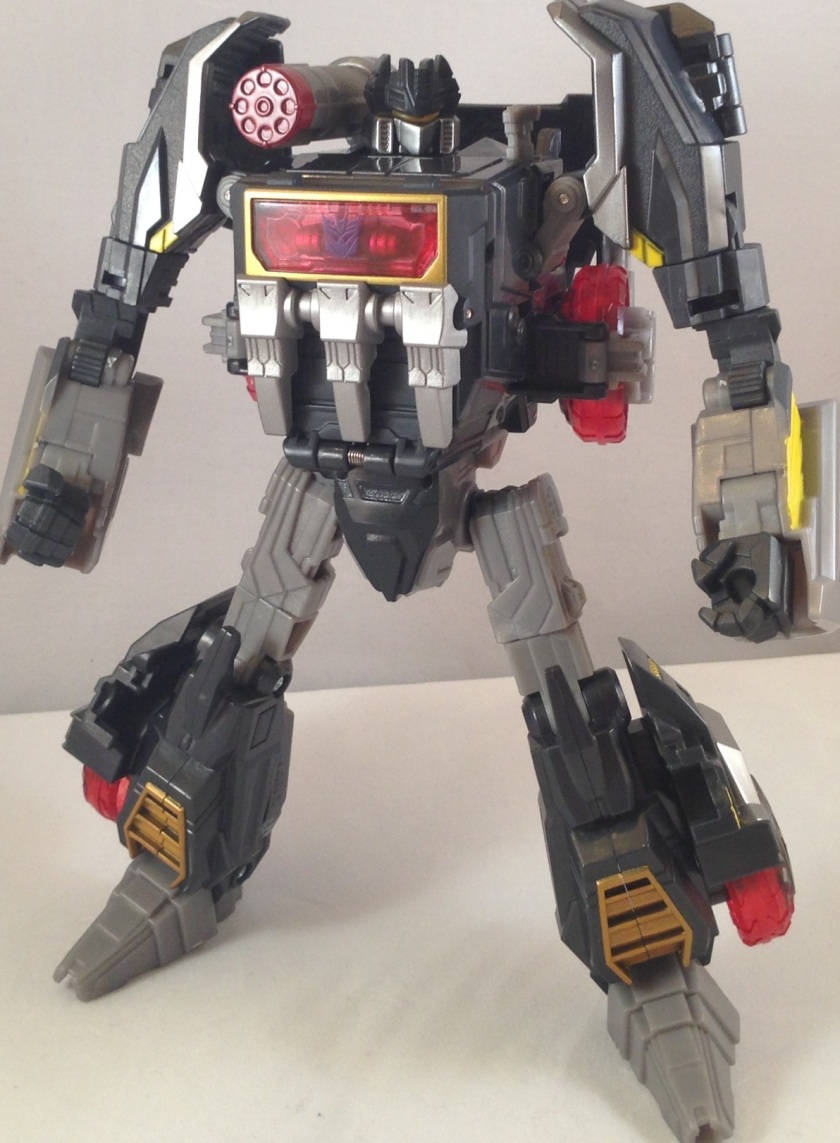 They went with Yellow for his eyes, which, even though its a bit inaccurate, still looks amazing: 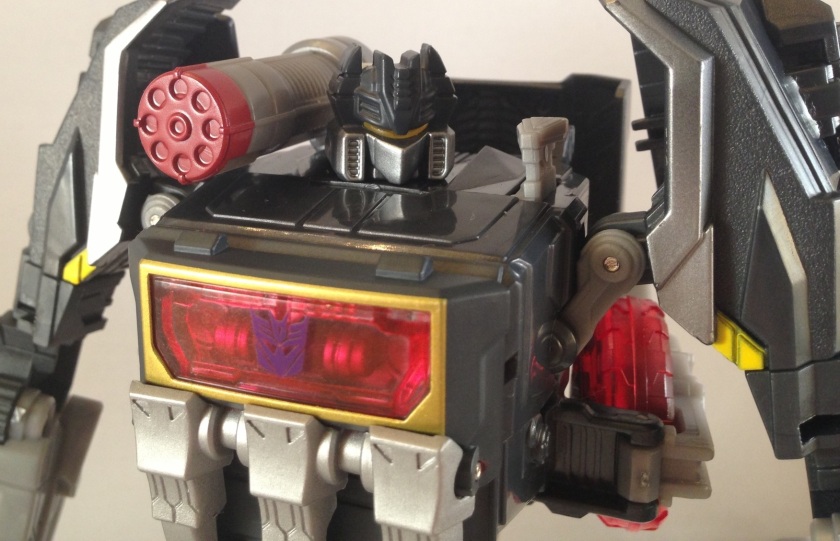 And the chest detailing is more visible through the red on his chest. Honestly, I like both versions equally. I thing Soundblaster looks just as amazing as Soundwave:

And even though Buzzsaw is more of a mustard yellow instead of shiny gold, he looks great too!

And just for a reference, here he is with encore Soundblaster ( I would LOVE Wingthing as a Data disc!!!) 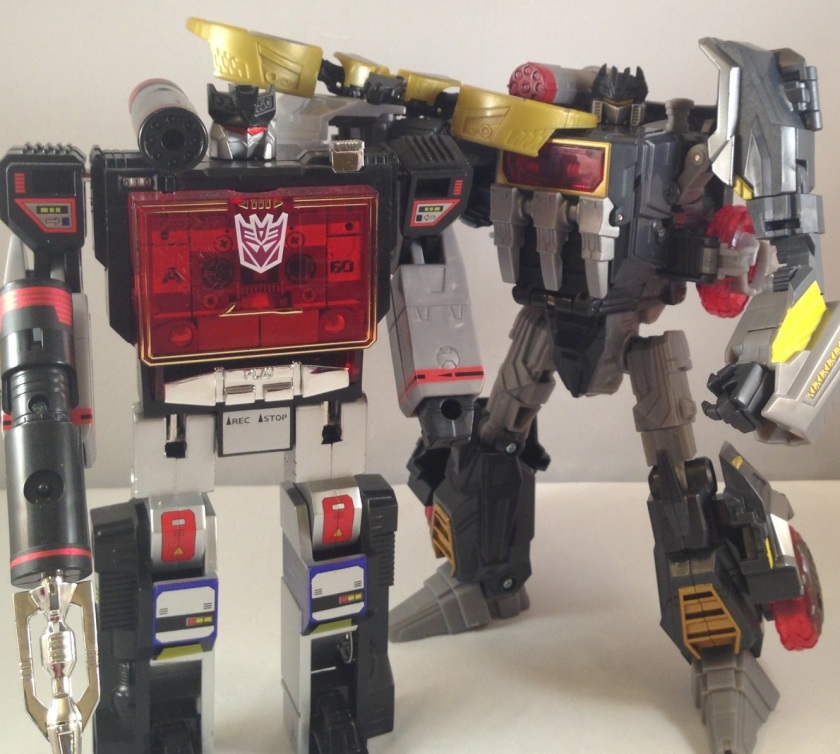 And again, if you’re really put out by his lack of a gun, the G1 rifle works just fine.

So there we go. I just can’t get over how much I love these guys. Im so enamored with them in fact, that I’ll be holding a contest very soon, with both of them up as prizes. Two lucky winners will win Soundwave or SoundBlaster! More on that later though.

Finally here’s a full Family Shot. I keep Ratbat and Rumble with Soundblaster and Ravage and Frenzy with Soundwave: 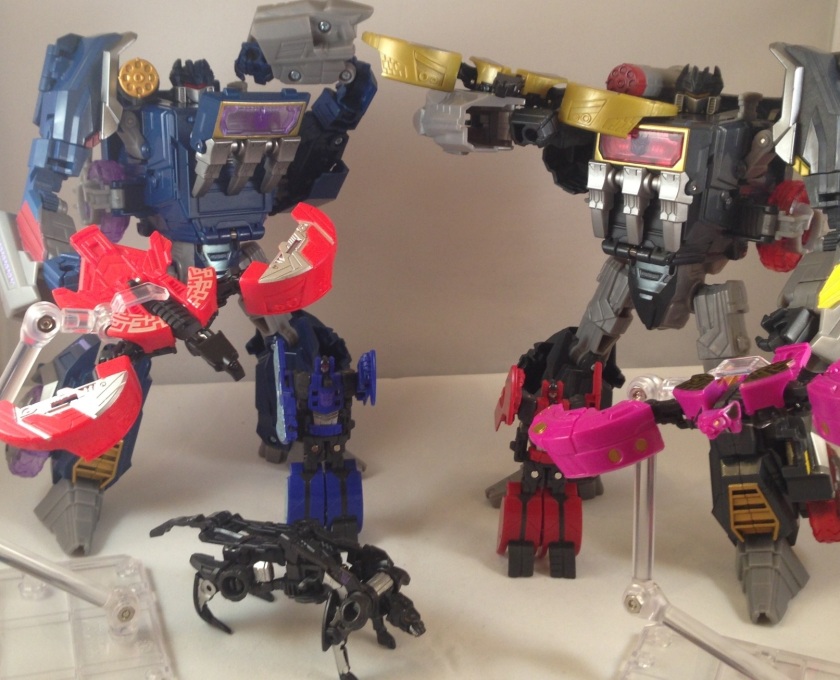 I’ll post later on how to get him in Boom box mode (it’s pretty easy).

Up next, l’ll break up the FOC love fest with Fans Project’s Insecticons, Chrome Dome and Broadside.

Stay tuned!! Oh….and Happy New Year to everyone! May 2013 be filled with Transformers and apparently higher Taxes for everyone in the US….sigh.