Finally, I can wrap up the Wave 2 deluxes from the Fall of Cybertron Generations line with KICKBACK, one of the three Insecticons you battle in the game – 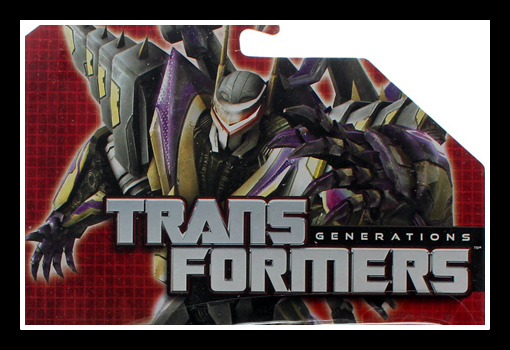 I was honestly on the fence about getting him since the first pictures of the wave surfaced.  While I desperately wanted the rest of them, Kickback to me seemed…so-so.  Well, I was wrong.  HE’S AWESOME.   Being that he is one of the two new molds for the wave, he stands above the other repaints as having his own unique build and frankly, for an Insecticon, Hasbro did a very good job maintaining in-game accuracy, coloring while still giving a nod to both G1-ers AND PRIME fans (with the head sculpt).

The first thing I noticed about him is that he has a really well defined “A-Frame” appearance.  His legs are very thick his torso is lean and tapering, a very good design for a bad-guy.   His coloring surprised me a bit as he has metallic gold which almost seems like he’s from Takara, but the rest of him is matte grey and purple so, he’s obviously not.   As with some of the other Fall of Cybertron toys, there’s a couple of ways you can transform him in robot mode.  I tend to keep him in a more “G1” styled look, so his longer “legs” stay back and up (like the wings on G1) and his insect arms I keep folded “Morphius” style behind his back : 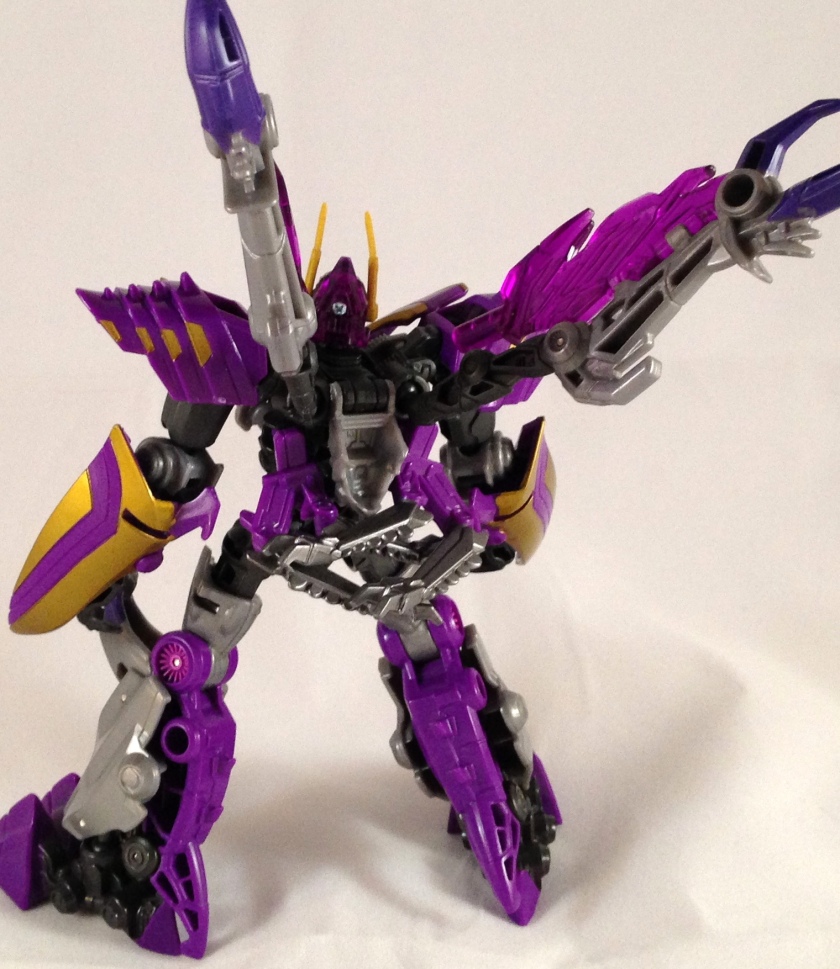 However, if you want a more game-accurate look, the clear purple wings detach and become “swords” for him to hold, and the long pincher legs should face forward and down a bit, like so: 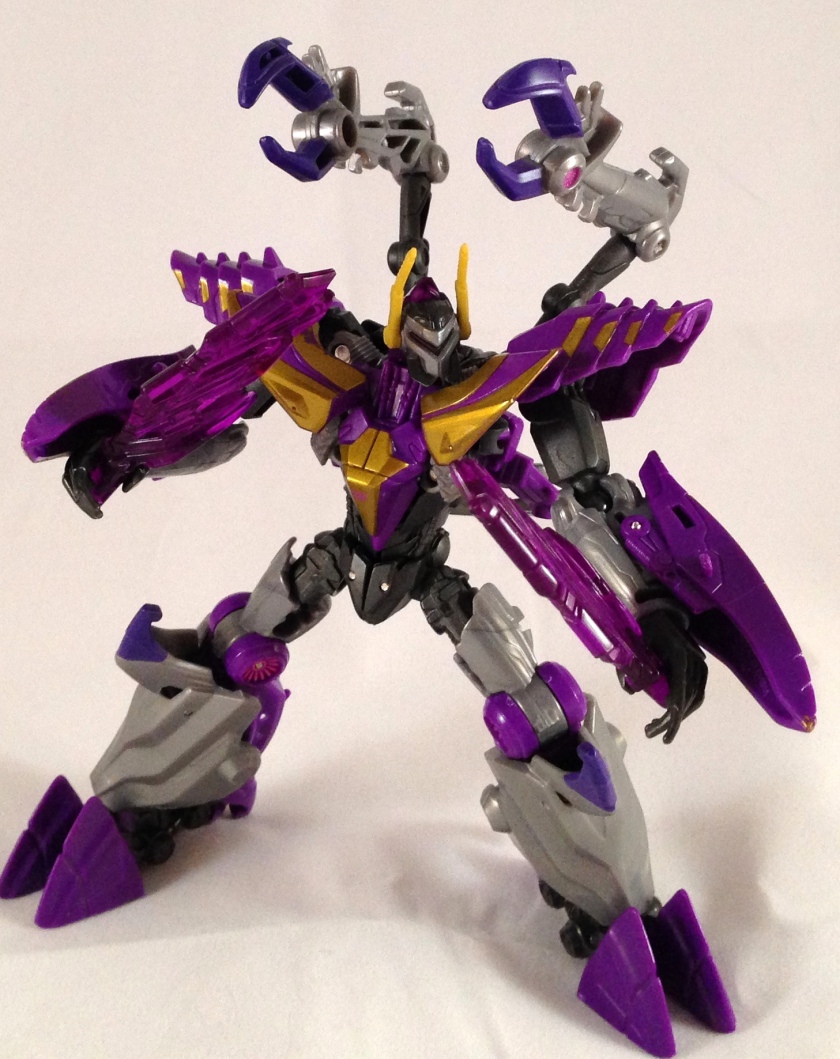 Honestly, either way looks incredible.  I would point out, as well, the amazing amount of intricate detailing in his frame-word, specifically on his legs.  From the gears in the knee joint, to the interlocking mechanics of the ankle and the spindly fingers, he’s just very well designed.  Its no wonder people rank him as one of the best from the series so far.

As I mentioned before, while his over-all appearance is very similar to his G1 origins, I think it’s obvious that his head sculpt is a nod to fans of Hardshell from Transformers PRIME: 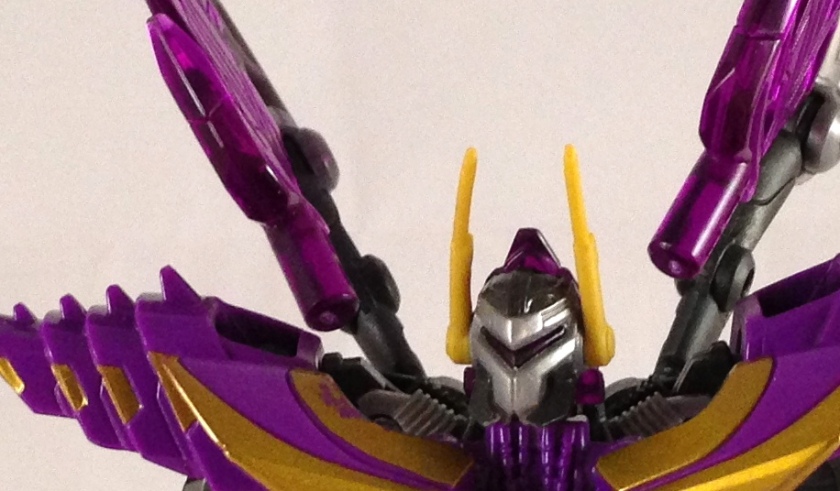 To an extent.  I think it’s what kept me from wanting him right away, but the more I look at him the more he does have a lot of similarities to the G1 toy’s head, and frankly, he’s spot on to the in-game model.  The antenna are soft-rubber like plastic so there’s really no risk of damaging them and you can tilt them forward or back, depending on your preference.   You may notice that paint damage up near his left collar – that was right out of the box, so I was a little annoyed but it also looks like battle damage a bit, so I’ll live with it.

Kickback also comes with the Gear Shredder from the game!

Like all of the other weapons from Wave two, the Gear Shredder is very in-game accurate in design, but WAY over sized.  Frankly though, I don’t care.  I’m thrilled that he came with my all time favorite Multi-player weapon! 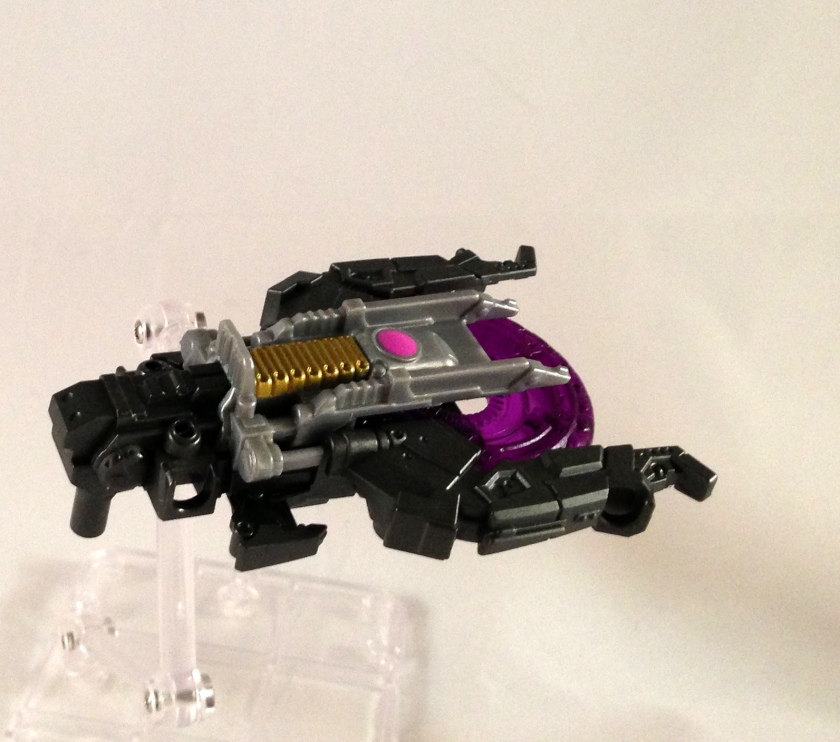 Once again, the detailing is just fantastic, and the purple gear-saw shoots out when you push the back in.  Many people have pointed out that it works REALLY well with Voyager Soundwave, but I like to keep it with Kickback.  (Soundwave looks weird with anything but his concussion rifle).

As cool as he is in robot mode, I really like his insect alt-mode as well!

Transformation is quite impressive – you sort of split him down the middle and rotate his body around a center axis.

The end result is a very good looking Robot Space Grasshopper!  I’ve really grown to like his alt-mode a lot.  Some people take issue with the fact that nothing really pegs in securely, which in a way is true, the only problem I have from this however, is that his little forelegs tend to get flipped upward when I’m getting him into a pose.  They sort of just fold down neatly over the collar section, but a peg system would be very nice.  The rear legs don’t peg in either, but I wouldn’t really want them to.  Plus mine have such strong joints that wherever I have them, that’s where they stay until I move them.  So for me, it works really well.

The only TRUE issue I have, is that for some reason, on my Kickback, his thorax does NOT want to stay pegged together.  I’ve talked to quite a few other reviewers and none of them have this problem, so it must just be mine:

It’s entirely possible this is “User Error” but I’ve fiddled with the arms so many times and no matter what, the two thorax sections never want to stay together.  I’ve even tried trimming the pegs, to no avail.  However, its not the end of the world, as the separation just looks like they cover another set of wings or something.

As for the Gear Shredder.  You can see that the swords attach and become his actual wing membranes, however, the Gear Shredder sort of changes his over all aesthetic.  It attaches to the top of the two longer pincher legs into the two slots: 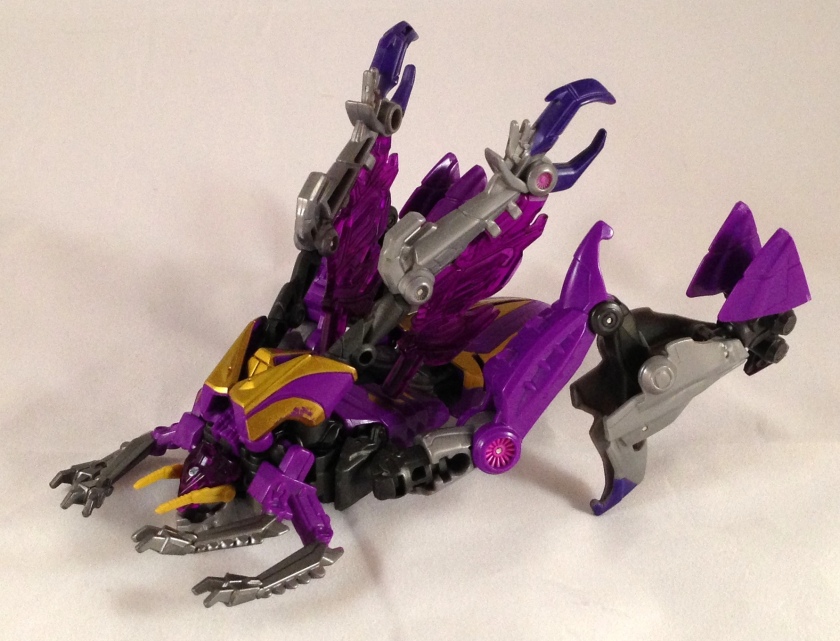 Changing him from this – to this:

To me, this makes him look WAY more like some type of beetle.  Which is fine, really, he’s still a bug, but I guess I don’t like that the Gear Shredder covers a lot of the cool little details of the wings.

While I could kiss AMAZON.COM on the lips for having him in stock and for so cheap (14.99!USD) I was pretty annoyed with the fact that they smashed his box into a package with another, much smaller item, so all I could really salvage from his box was the box art:

But it looks awesome, so that’s totally fine!

Finally, lets take a look at some size comparisons with some other, just as awesome Insecticons!

First, we have Fansproject Bombshell, as he’s the only FP Insecticon from the first series I have.  They look really good together, but I really hope Hasbro makes FOC Bombshell, as the purples and yellows don’t really match up and Kickback is noticeably taller. 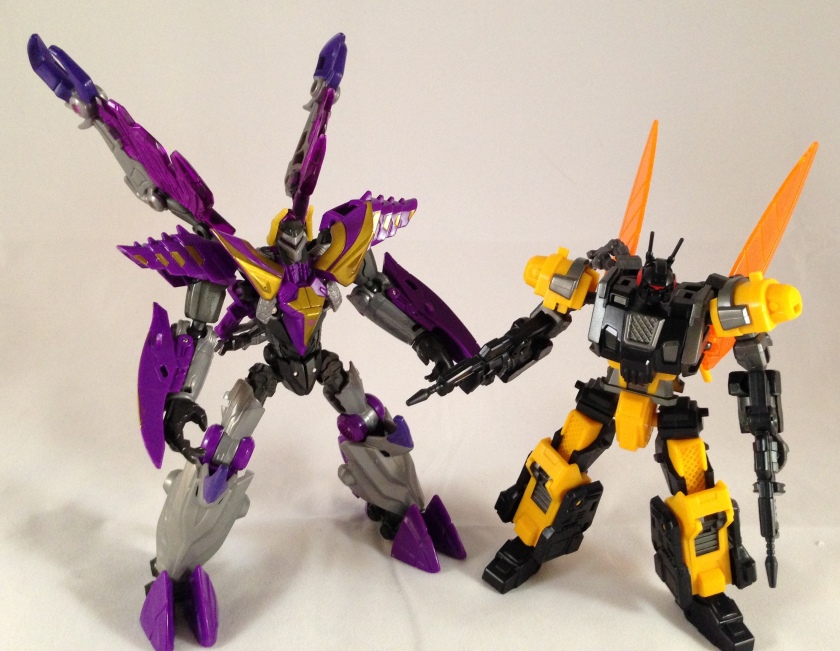 Finally we have the Two Grasshopper brothers, Ransack and Kickback.  Again, the Fansproject figures are noticeably smaller (though that’s something I truly love about them!) but you can see some of the similarities between the two characters.

So all in all, I was very pleasantly surprised by how really cool Kickback is.  Again, I think Hasbro would be justified in making at least Shrapnel or Bombshell for the final wave, but I really would like them to do both!  I got my Kickback at Amazon – you can check there to see if he’s available, otherwise I have started to see him popping up at Toys R Us and Target in retail.  I highly recommend him!

Coming up – we’ll be taking a look at quiet a few cool new things, including the Kre-O Micro-changer Combiners, Mech Ideas Twintwist and Topspin and my take on IDWs latest Spotlight: Megatron, MTMTE and Rage of the Dinobots.

Also, in case you missed it, THE ONE YEAR ANNIVERSARY CONTEST page is up here.  There’s been a GREAT response so far, so keep it up gang!