HERE IT IS! Since the day he was announced, I’ve been eagerly awaiting his arrival, and this week, he heeded the call to my front door step: Generations (“FOC Based”) Metroplex:

As the box generously totes in several places:  Metroplex is the new “Titan” class and as such he’s roughly 2 feet tall. In order to get an idea of his size, we’ll look at some size comparison pictures: 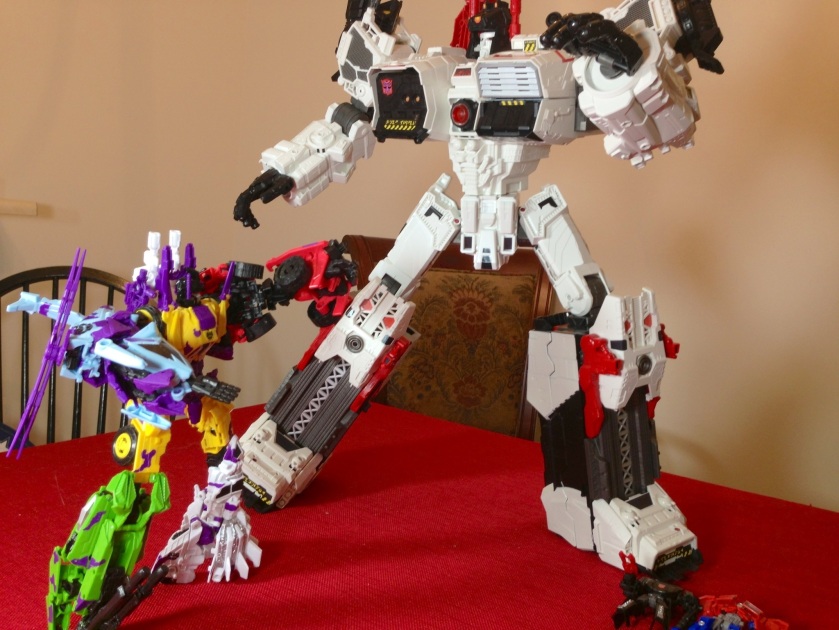 Here he is with G2 Bruticus –

And Year of the Snake Omega Supreme.

And here’s how he measures up with the legends class. Heh…or how they measure up with him. 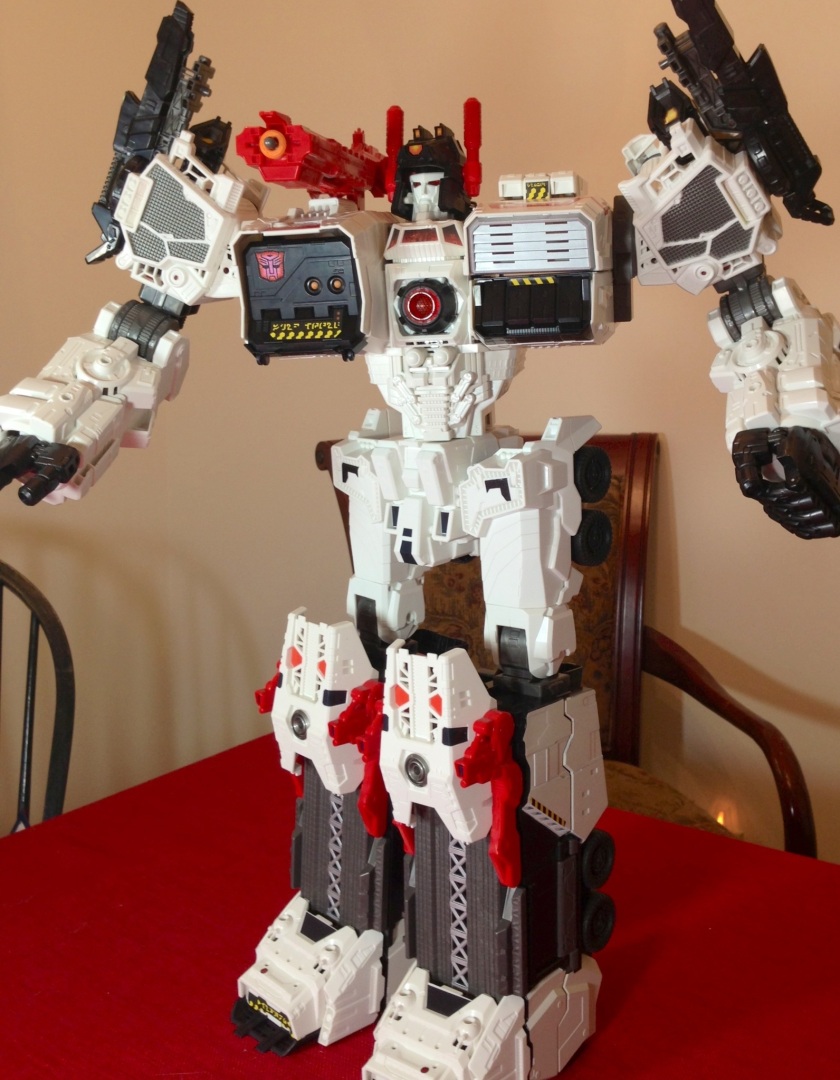 Metroplex has some amazing detailing worked into his mold. Because he’s based on the Fall of Cybertron iteration, he has an electronic light up gimmick with a very game accurate voice, quoting some of his lines from the game.

He features moving pupils that are controlled by a tab in the back of his neck. 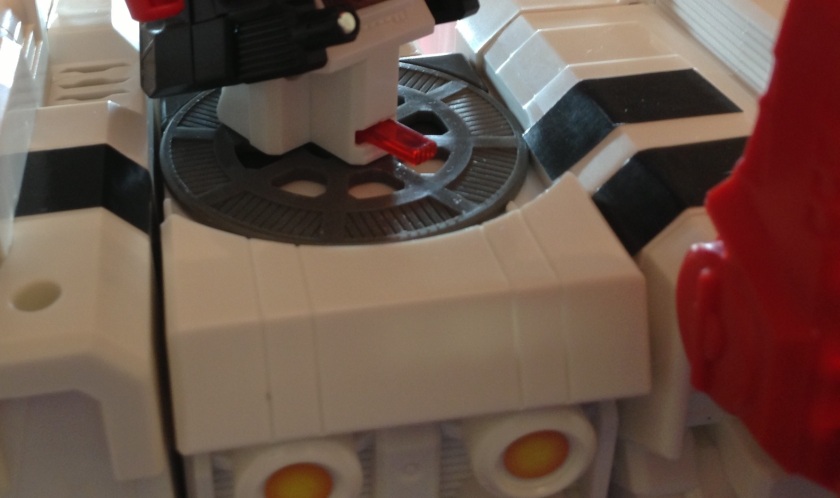 Unfortunately as you can see from the picture, you can only see them when the light up gimmick is active. He also features some great stickers – on the chest you can see Prime, ‘Bee and Arced in each window.

And cool thrusters on back as we’ll as the G1-like red striping. I do hope we get a Reprolabel upgrade set for him.

The hands are quite nice, with each finger being articulated. I feel that the fingers could have used a knuckle joint too, but that’s a very minor complaint.

There is a cannon built into his left shoulder, than can be maned by a legends class figure. He is specifically designed to work with the new legends class figures. And seems we have confirmation from Botcon that we’ll be getting more of them, that’s a very good thing.

You’ll have to bear with me on the City Mode pictures, as he’s quite big so my normal set up wouldn’t do:

Here is the basic layout. I used G1 minibots here by request. As you can see, the general layout is not too far removed from the G1 version, it’s just bigger and far more functional. In city mode there are a quite a few cool things to note:

First – the neutron cannon from the FOC Game is built into the right arm, again fully accommodating a legends class. The hands do not get very well hidden but they at least have a double joint in the wrist allowing them to fold under. 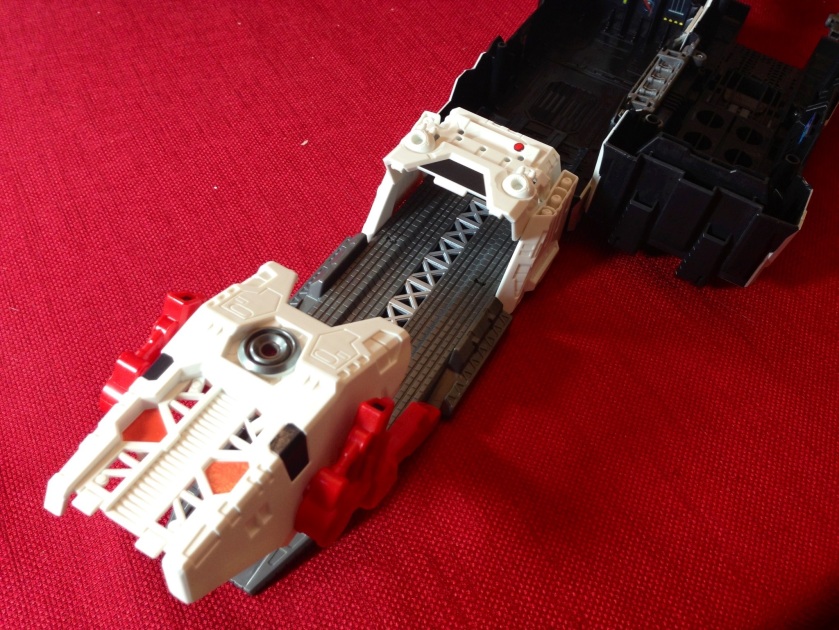 The “knee cap” sections no longer have to be removed but form the first overpass on the “freeway” lanes. The feet also form gates, which is quite cool! 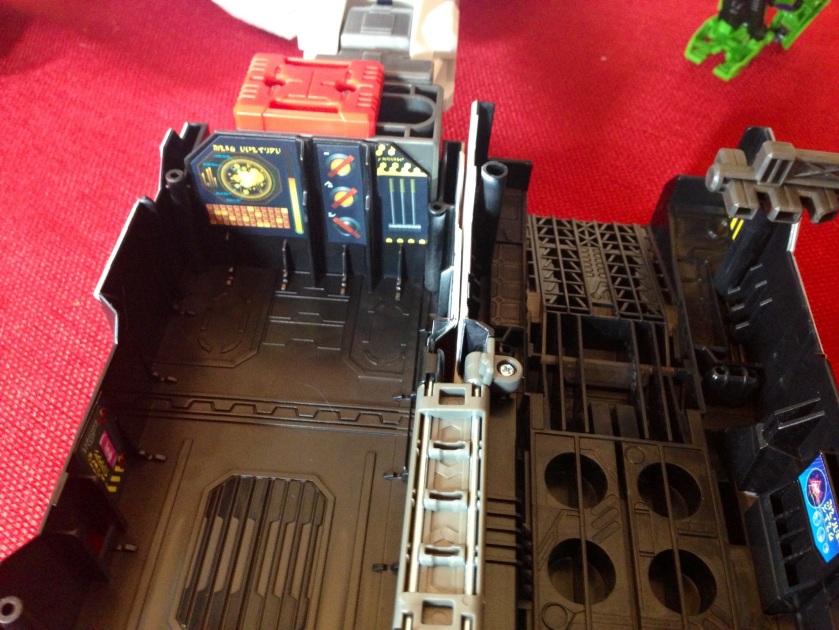 Again, there are a lot of really nice stickers throughout the entire figure. 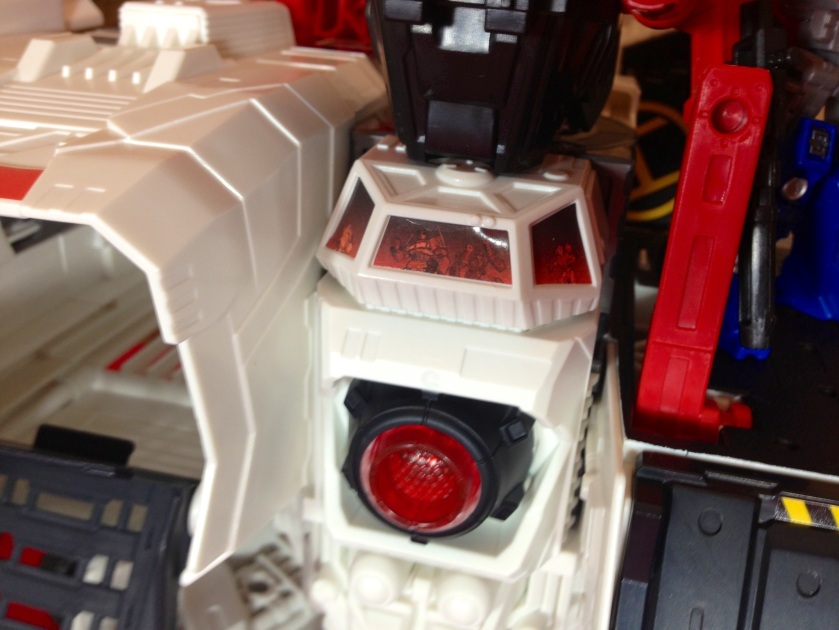 The head no longer collapses into the body (mainly because of the electronics) but instead, the “helmet” section rotates forward to cover the face. It’s quite a bit more successful than the G1 versions attempt to hide the head, and there is a panel that flips up to resemble a terminal or command post. 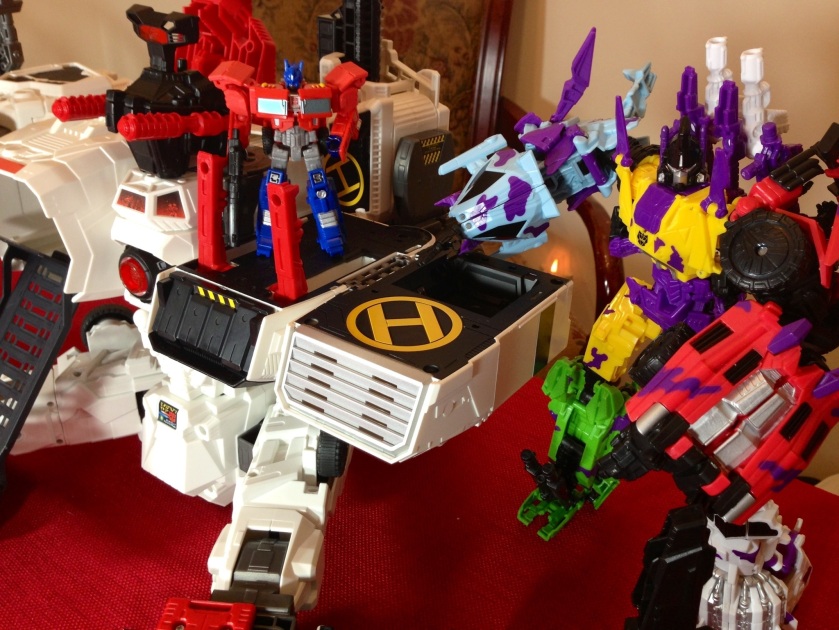 There are a few added parts to the helipad area, and even though I didn’t have it open the missile bay still flips open as well.

Dudicus even good attacking the city!

Carrier Mode is nothing mind blowing either in terms if how it’s accomplished, but when it comes down to it, even in the fiction, it’s never really was: 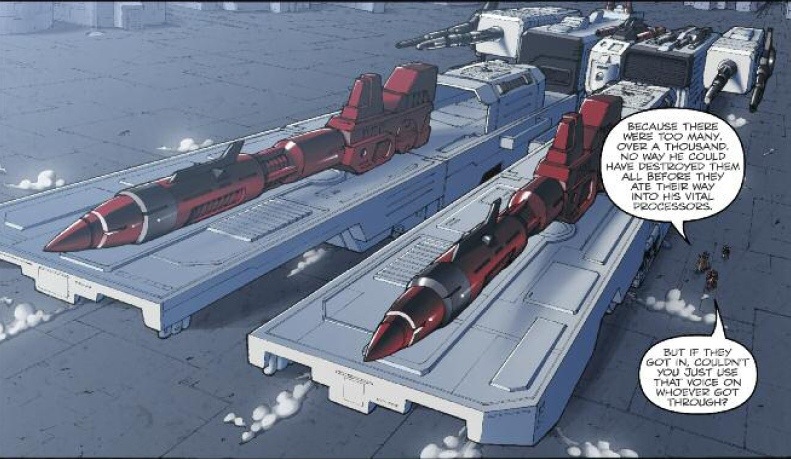 And frankly, the big guy has some saving graces to help him out!

For starters, the new aircraft carrier-like runway is outstanding – with a massive amount of sticker details (each yellow arrow stripe is a sticker!) 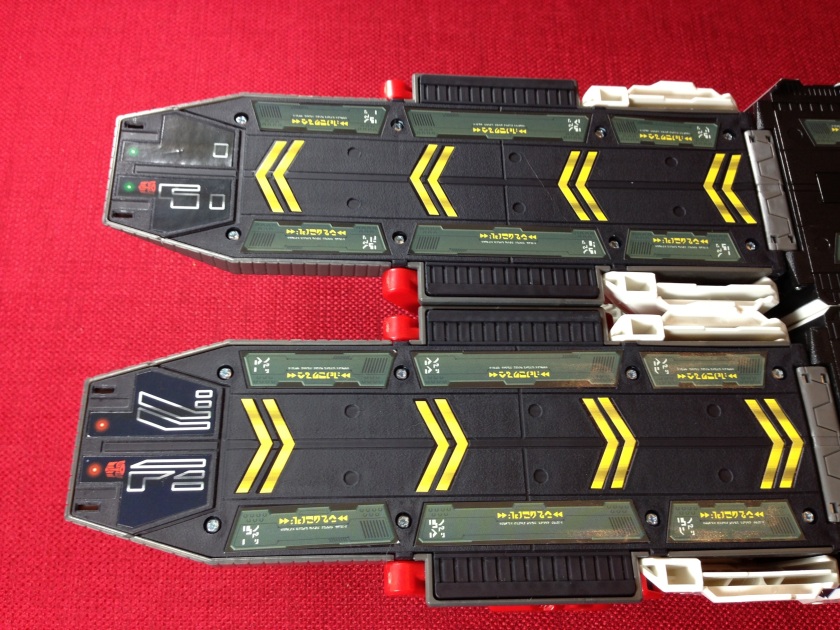 As well as a little construction crane built into the left runner:

There’s also the a command deck and secondary helipad, as well as the mountable cannons on the shoulder: 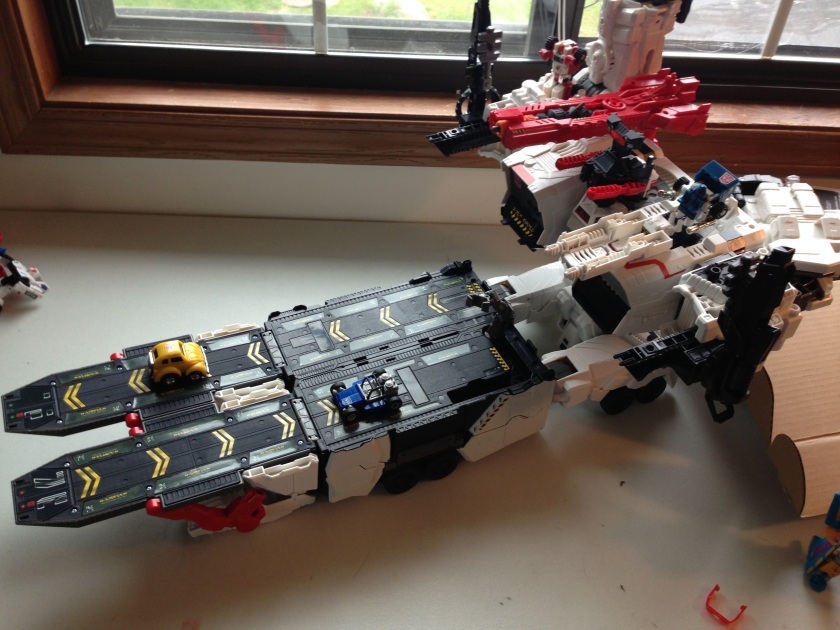 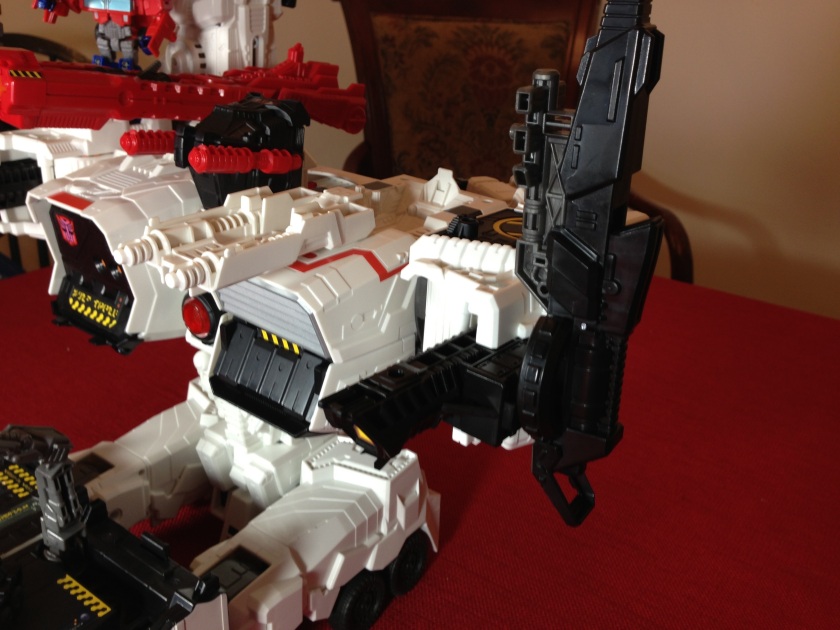 So for a boring mode, Metroplex pulls it off quite nicely!

As if the big kahuna wasn’t enough, we also get a legends class sized Scamper!

And whoa bully! Do I have the eyes for him! See for me, as a kid growing up with the original Metroplex, frankly, I couldn’t have cared less for MP himself, but I took Scamper EVERYWHERE. I don’t know what it was about him, but I loved him!

So when I first saw the initial pictures of the NEW Scamper, I was less than enthused, as he looked like a simple repaint of the piece of garbage “clocker” mold with a new (and for some reason, red, head sculpt). As luck would have it though, he’s not a repaint, and he’s totally awesome!

And once again, I want to take him everywhere! While he has a simple transformation, he’s exceptionally poseable, and a lot of fun! 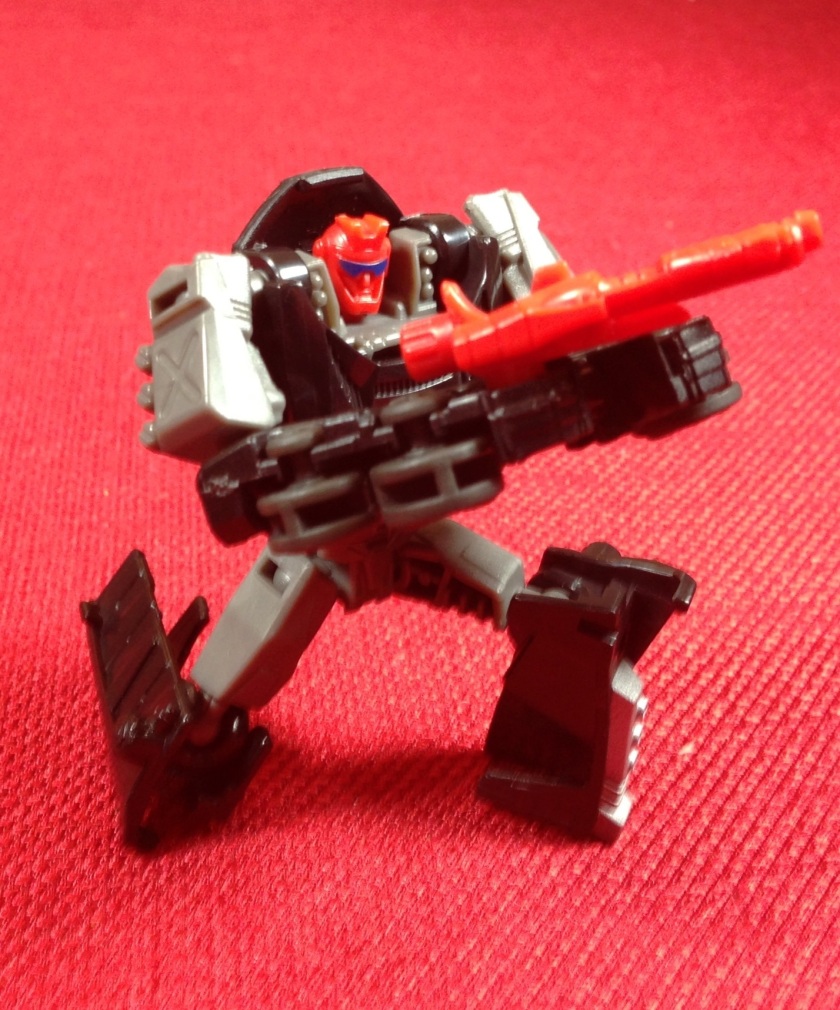 As for the head-sculpt, while I still don’t understand why they made it red, I’m really digging it a lot!

Basically, this entire post has been to elaborate on one, conclusive thought:  BUY THIS THING NOW.

You can’t go wrong with him.  He’s big, he’s awesome AND he sends the message to Hasbro that they’re doing the right thing by making this sort of toy available. 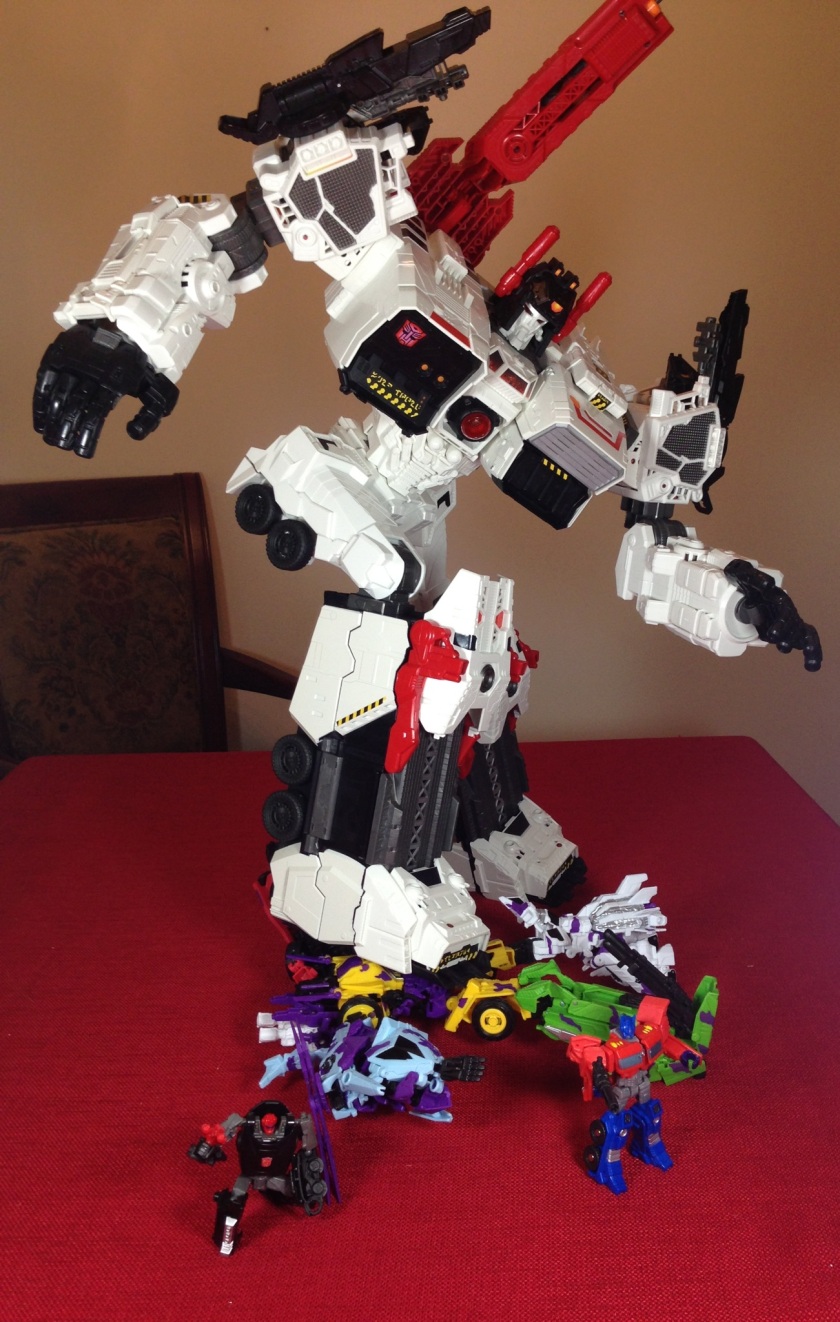 Need more convincing?  Well, while it’s not guaranteed, the likely hood of us getting: 1.) An upgrade Reprolabel set, 2.) a 3rd party Slammer (the little tank) and Six Gun, and 3.) possible upgrade part from a 3rd party, and finally 4.) A repaint by Hasbro or Takara as Metrotitan are ALL very high.

Here’s Part One of the video review – don’t forget to subscribe and watch the other two parts as well!

Stay tuned for more, there’s a lot of stuff to cover, including the upcoming TFCON trip!