So, after the massive success of Hasbro’s Voyager Class Springer, they decided to let it ride by putting a bunch more effort into Voyager Class Sandstrom!

And whoa doggies did they do a great job! Sandstorm is a heavy retool and repaint of Springer so much so that side by side, it’s hard to tell they’re the same mold: 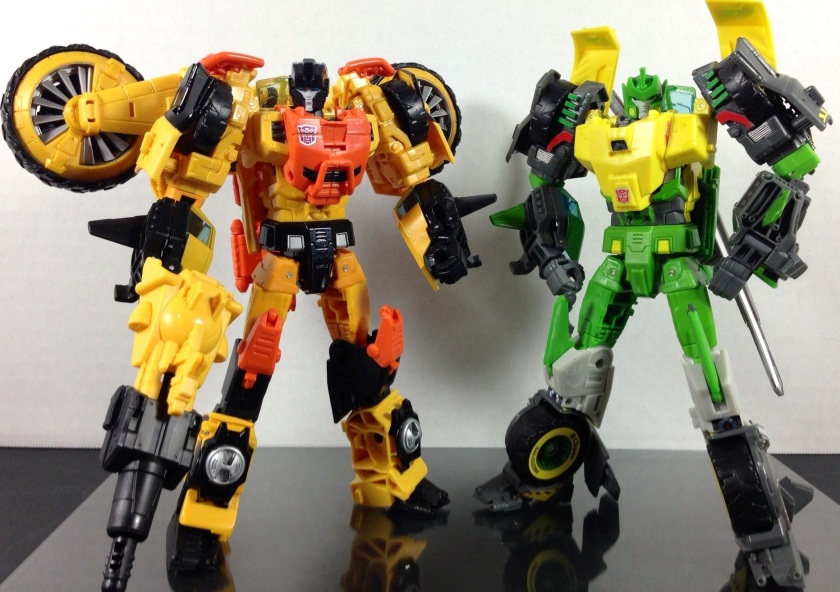 The cool part is, Sandstorm doesn’t really ride on Springer coattails much. He’s kinda his own, stand alone personality and because he’s sort of a 3rd tier character, not showing up much in the comics or G1 cartoon, it makes Hasbro’s decision to give him this kind of treatment that much more awesome: 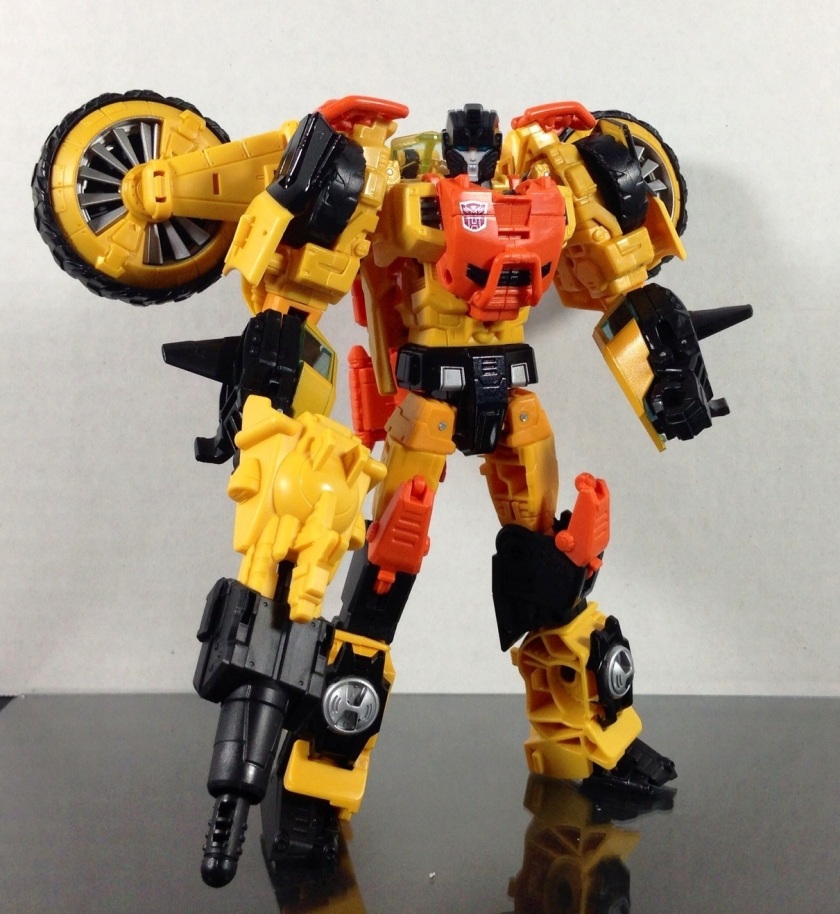 But of course, its not entirely out of the blue…Springer was based on Nick Roche’s amazing Last Stand of the Wreckers design, but seems the Thrilling 30 line is heavily partnered with IDW (and thus, Mr. Roche) – Sandstorm was also designed by Nick, though he never really made it into any of the comics…yet:

And really, Hasbro stayed very close to the design. Take a look at the head sculpt (picture ended up a bit more blurry than I would have liked, sorry)

And the over all body structure is quite accurate, though to be honest, I tend to keep the tail section down (however, after seeing this sketch again, I may stop doing that!)

As a toy, Sandstorm brings all the strengths to the table that Springer did. And while I was convinced he was going to usurp Springer as my favorite, I have to admit, he didn’t. It’s nothing against Sandstorm, he just doesn’t have the bravado Springer does. That being said, this is a most excellent toy and another perfect example of what Hasbro does RIGHT. For instance, despite the heavy VTOL/Buggy tires mounted on his back, he’s quite well balaced, and has very LITTLE back kibble: 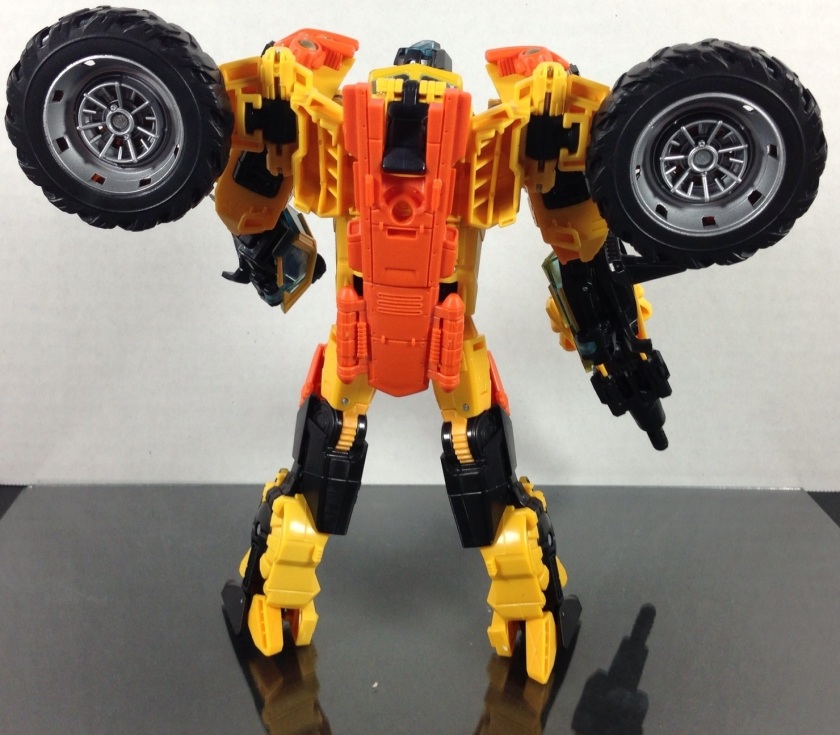 The transformations are as flawless as Springer’s and pull off some amazing pegs and folds leaving us with two very distinct, and fun alt-modes (WARNING: Stock photos coming up – my camera/phone died) 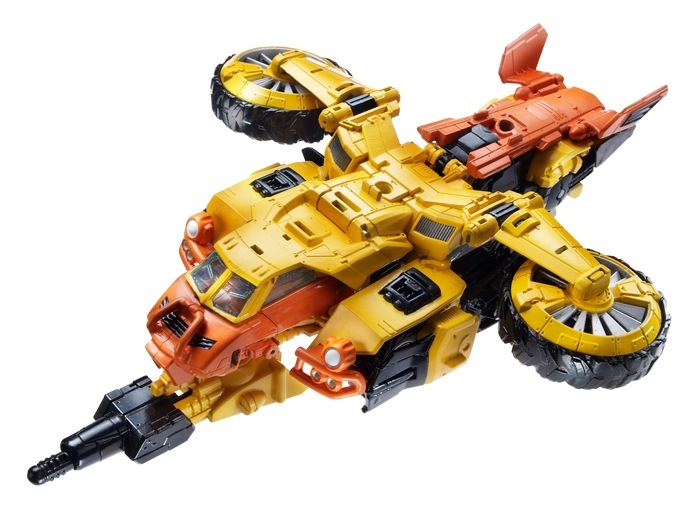 VTOL mode is outstanding, and I love that he’s not ANOTHER helicopter like Springer (and like the G1 toy), but honestly, I feel it’s his least successful mode, ONLY because I love the other two more. It’s still amazing how they engineered the turbines and cockpit, and you should definitely check out the video review if you’re having trouble getting the gun into the nosecone area.

Dune Buggy mode is where he REALLY shines though:

There’s nothing about this mode I don’t like. I even like the gun mounted on the roof (and usually I hate that) – the rear tires being HUGE, the roll bars on the front and safety cage on the windows, he’s just so sleek and yet bad a$$ looking! Compared to the dinky G1 version, where there was very little special about it, the two alt-modes on this Sandstorm are so well done and look so different from one another, its just another Home Run by Hasbro.

And speaking of the G1 toy –

The colors the chose are very close to the G1 version. I love that they kept the face white, it’s really a distinguishing feature to his character design.

So there it is – if you’re on the fence with this guy (I don’t see how you can be…) buy him. He’s just as good as Springer, except doesn’t have a cool-guy history.

Blitzwing was in the bathroom

And as always, here’s the video:

Stay tuned, we have a LOT more coming up!