SO…..SDCC just wrapped up.  Unfortunately, I wasn’t there. I would have loved to have been there, but things get busy in Summer.  I’m hoping for next year.   Anyway, if you’ve been following the Facebook page, we’ve posted a few picture galleries here and there from sources at the event (Named after the article for credit’s sake).  I figured I’d put them all here in one post for convenience, and so I can put my two cents in.

Let’s jump right in with a good meaty portion of LIOKAISER!

Yes, while Titans Return is in full swing, Combiner Wars has still some fight left in it, and one of the show cased items was Fan Favorite, Liokaiser!  Now, obviously he won’t be EXACTLY the same as the G1 toy, but from what we’re seeing in the pics, he’s got a lot of what we’re looking for.

First and foremost, the fact that Hasbro used “Liokaiser” is astonishingly great.  LioKaiser was never released by Hasbro during G1, so the fact that they kept his name for this release is a sure sign that the team behind the Transformers right now really listens to fans.   Moreover, as you can see on Killbison here, the deluxe classes will all have new head sculpts depicting their G1 Toys. 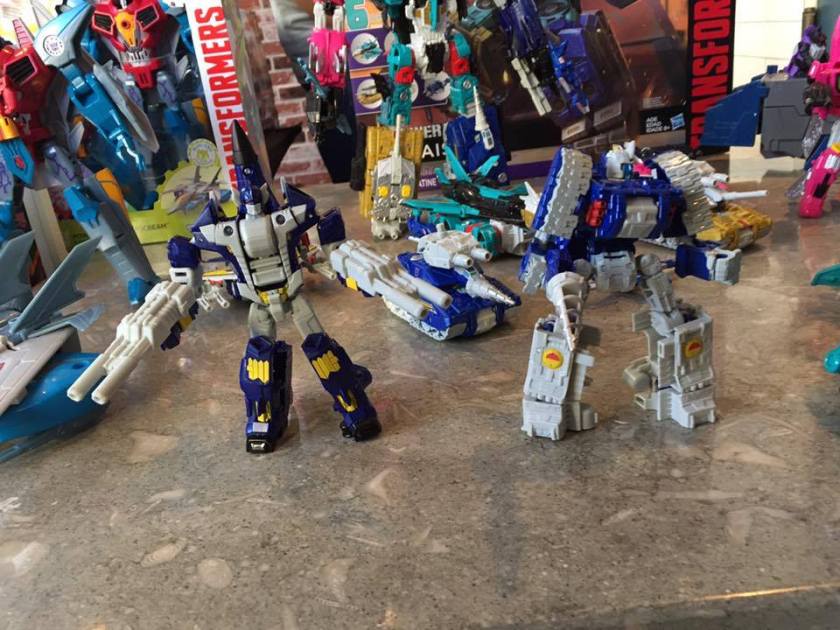 Also, the colors seem to be spot on for Guyhawk, Hellbat, Drillhorn and Killbison.  Very cool!   Where the compromise lies is in the fact that Leozak looks to be replaced by the Skylynx mold, now in Leozak (ish) colors and dubbed Dezaurus, I believe (likely instead of using DEATHsaurus as I’m sure that would be a hard sell to parents).   It’s an interesting compromise in that they were able to reuse the Skylynx mold (a unspoken prerequisite for most of the toys these days) and still managed to get a Liokaiser design made.

The vehicles all look wonderful together, and certainly convey the Breastforce team.   Eagle-eyed fans have already noted that he will be a “Platinum Series” release, which may have a slightly higher price tag associated with it, it’s not clear at this time.  My only “complaint” if you can call it that, is that they’re passing off the little minicon from PRIME as a “figure”, lol.  Otherwise I just can’t wait for this guy.  I’m always looking for a G1 Liokaiser, and I’m thrilled to have the opportunity to buy a newer designed version of him! 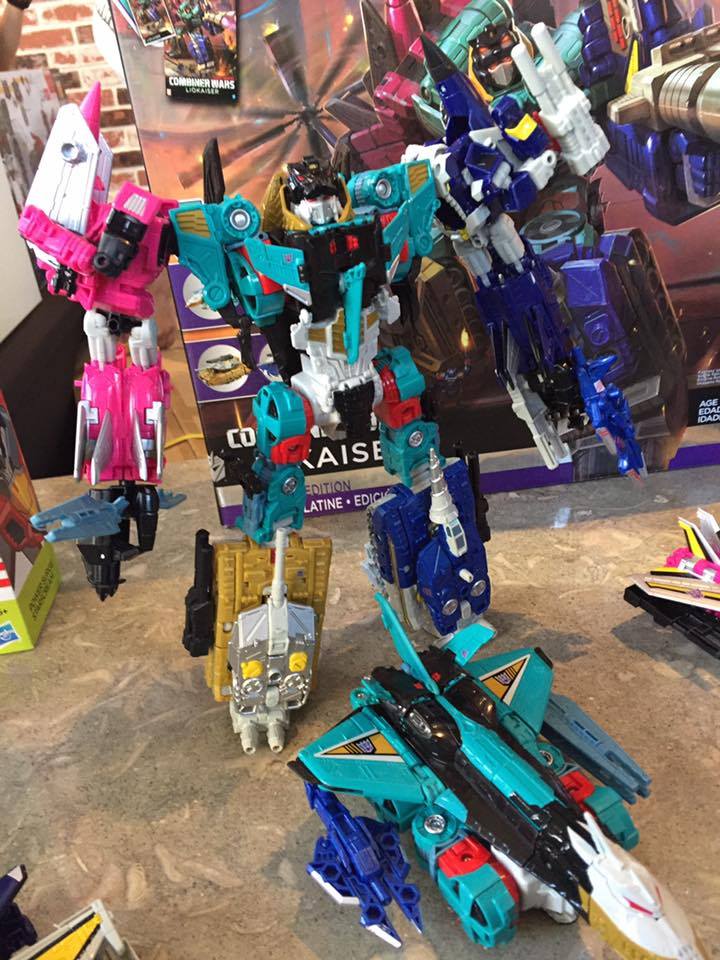 Moving on, the Robots in Disguise had a bunch of new toys on display as well!

We’re getting a legion class Bisk, who people seem to just love, as well as a deluxe sized version of the Powercore Optimus Prime.  MOST importantly we’re getting a new Starscream, who apparently utilizes a brand new mold.  On the far right is…a guy.   I’m afraid I’m not familiar with the character but it’s a new deluxe sized decepticon, which this line is in desperate need of.

We’re also getting a new “Ultra Class” 3-step Bisk, who looks quite nice as well! 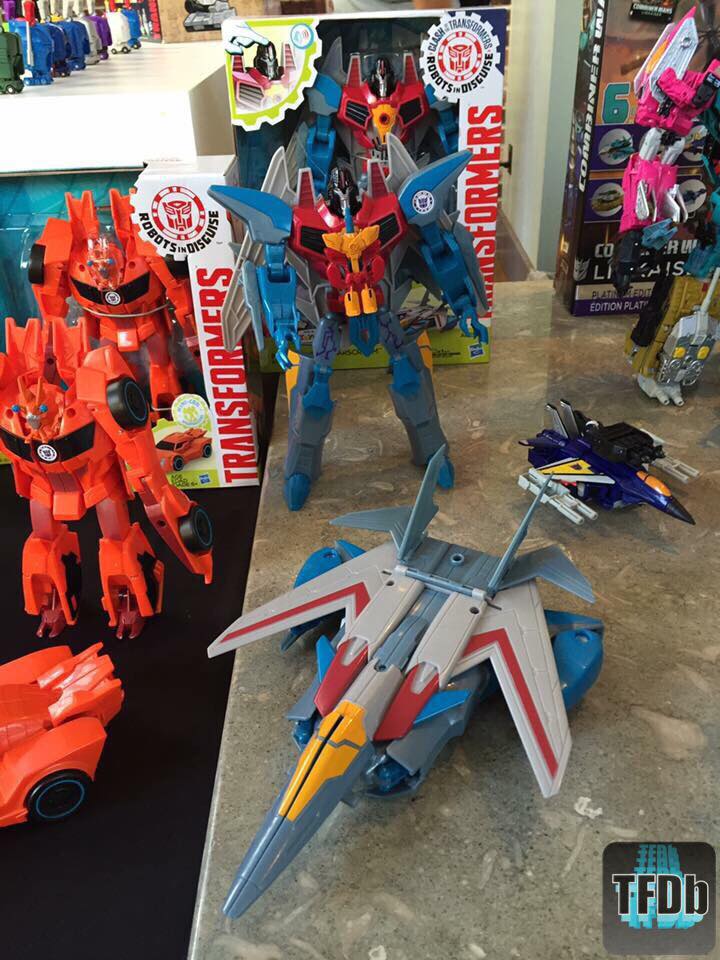 Also a UC 3-step Starscream who looks to have a mini-con attached to his chest as well!

The Titans Return line had some beauties on display as well, and we’ll jump right in with the big guy himself: Megatron! 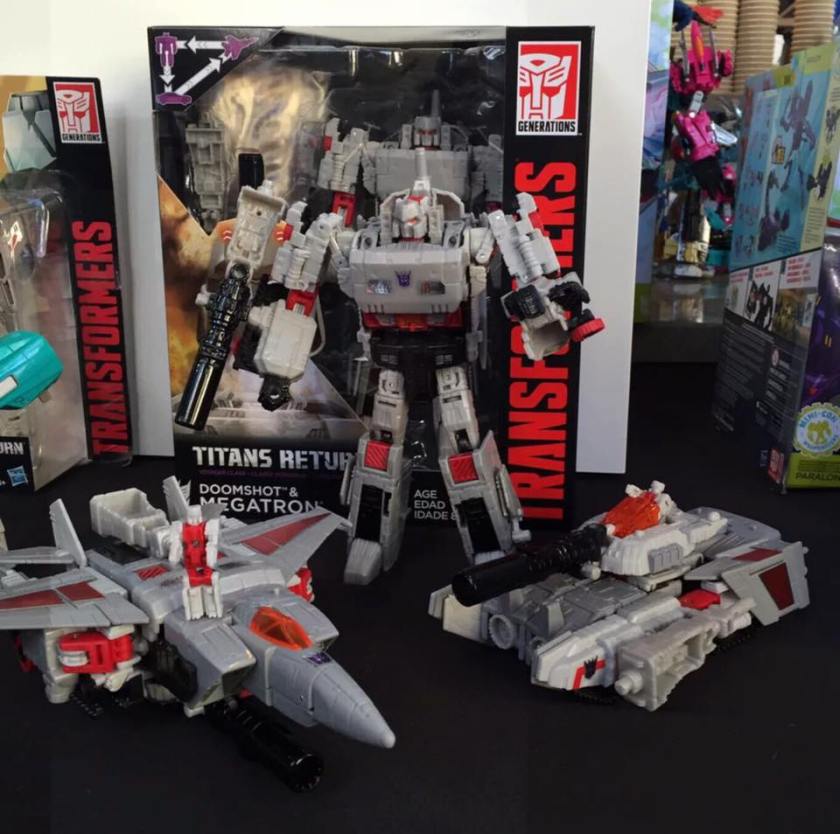 Somewhat right off the heals of the excellent Leader Class Megatron from 2015, Hasbro is brining the King Con back for the Titans Return line, now as a triple changer.  Now, this of course, will ruffle feathers (what doesn’t these days…) but many fans have been following the breadcrumbs to surmising a repaint of Megs into Blitzwing down the road.  Given Generations Blitzwing’s shoulders, this will likely be a nice step up.  It’s worth noting too, that Megatron appears to be much closer to his IDW look with this toy, so get those Autobot badges ready!  Some others have speculated at either Flywheels or Broadside out of this mold, but we’ll have to just wait and see at this point. 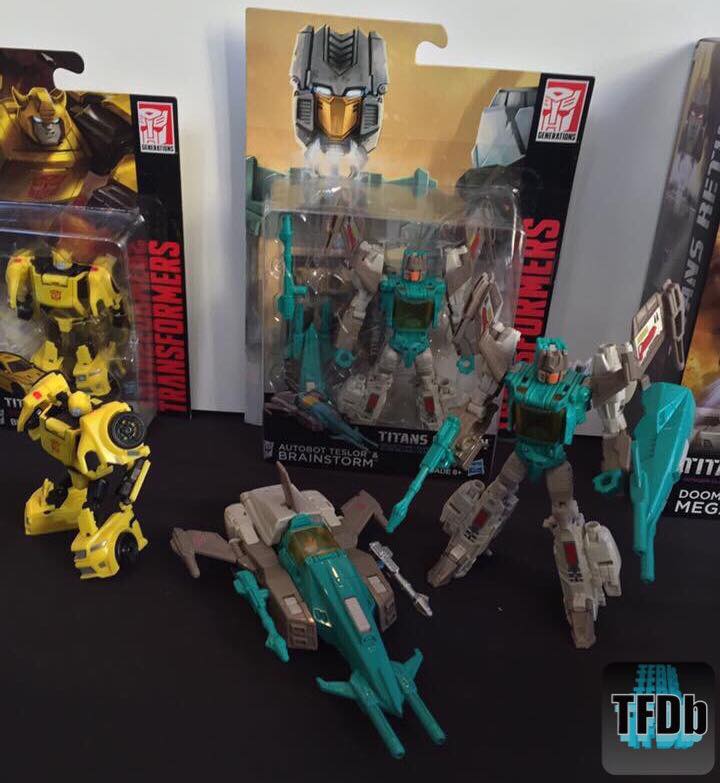 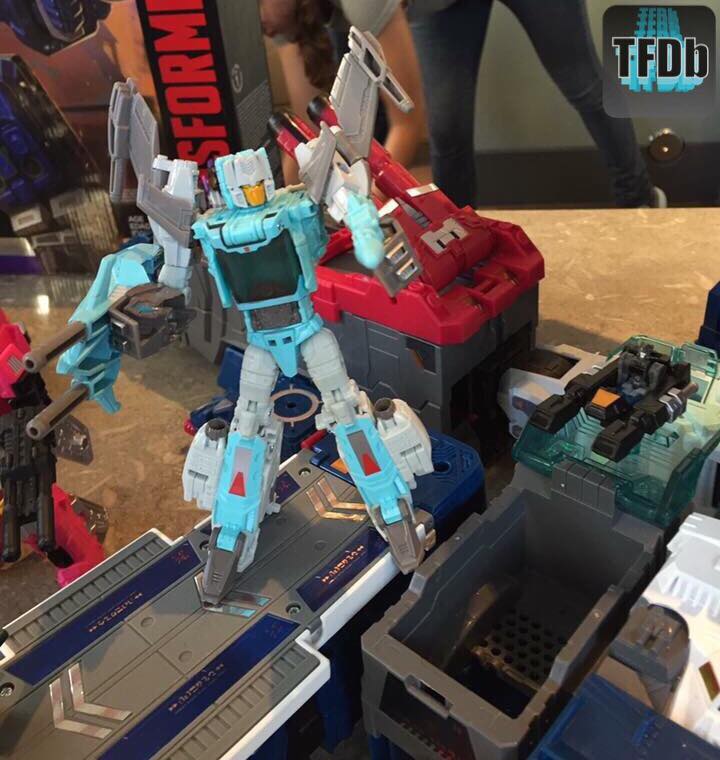 Pictured here are two different versions.  The top is the retail version, who will feature a more G1, darker toned color scheme.  He will be a Walgreens’ exclusive at the moment, but that may possibly change.  The bottom picture features the SDCC Exclusive Brainstorm who features more IDW based colors.  Yours truly will hopefully be getting him in later this week!

New solo packed Titan Masters are also on the way: 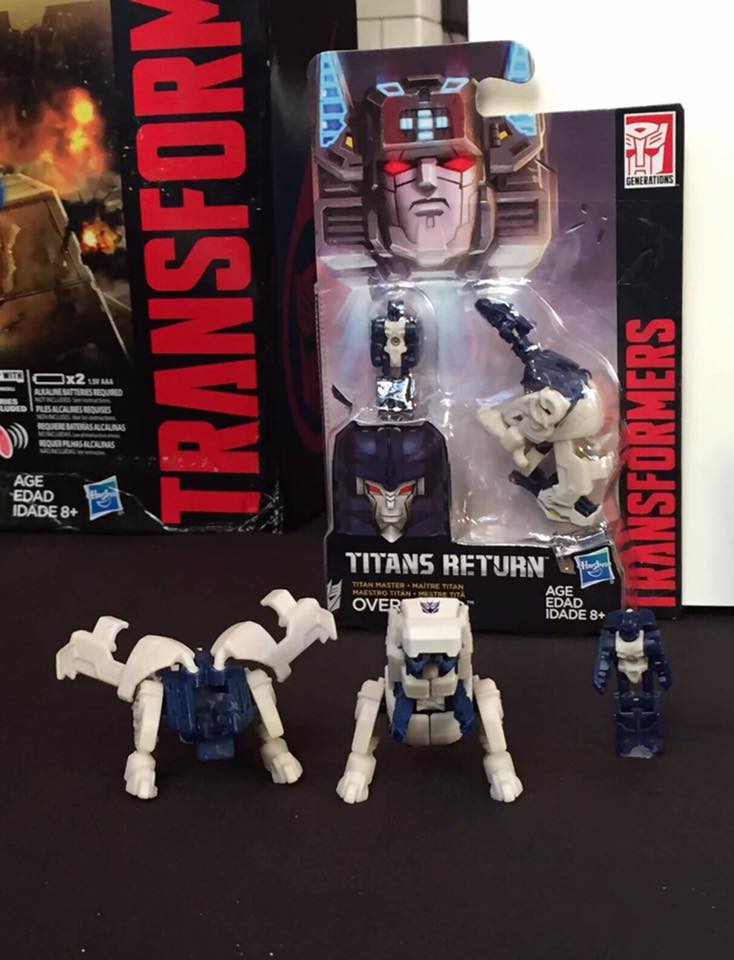 In my review earlier of the Wave 1 set, I even remarked how I was hoping for an Overkill out of the Crashbash mold and it looks like I’m totally getting my wish!  And what’s more, a Steeljaw (now Sawback, I guess) for Blaster, YAY!  I love the idea of some of the cassettes being made into Titan Masters for the tape deck boys.

Once again, however, the legends class line seems to have made one of the biggest splashes.  Fans went nuts when they saw Gnaw!! 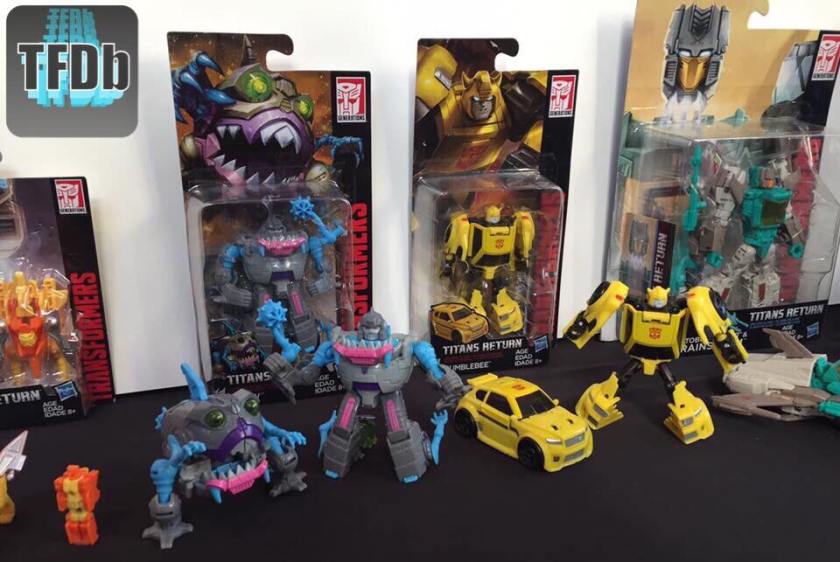 Sharkticons have fallen to the pits of “no one cares” for the longest time, but yet another exhibit showcasing the designers understanding of what the fans want, we’re getting a great looking update to the G1 toy, and in legends class size so you can (like many will) buy LOTS of them!  Also, I’m surprisingly excited for a new Bumblebee based off his G1/Classics look.  He looks like a LOT of fun!

Finally, some of the most astonishing news was not news at all.  Or at least, not something Hasbro planned to announce just yet, but as eager fans will do, someone took pictures of every side of the display and came across this on the back of Megatron’s box:

A small but substantial glimpse into the future of the line, we’re not only getting additional Titan Master and Deluxe class characters, but also a Voyager Sized Optimus Prime (hard to tell if he’s IDW based or not) and…and….A NEW SIXSHOT!!  HOLY COW.  That is some very incredible news, and something I personally have to try not to think too much about or it’ll drive me nuts waiting for him.
So on that note, we’ll look to more current available toys, I’ll have some new video and pictorial reviews coming soon on the rest of Wave 1.  So stay tuned!