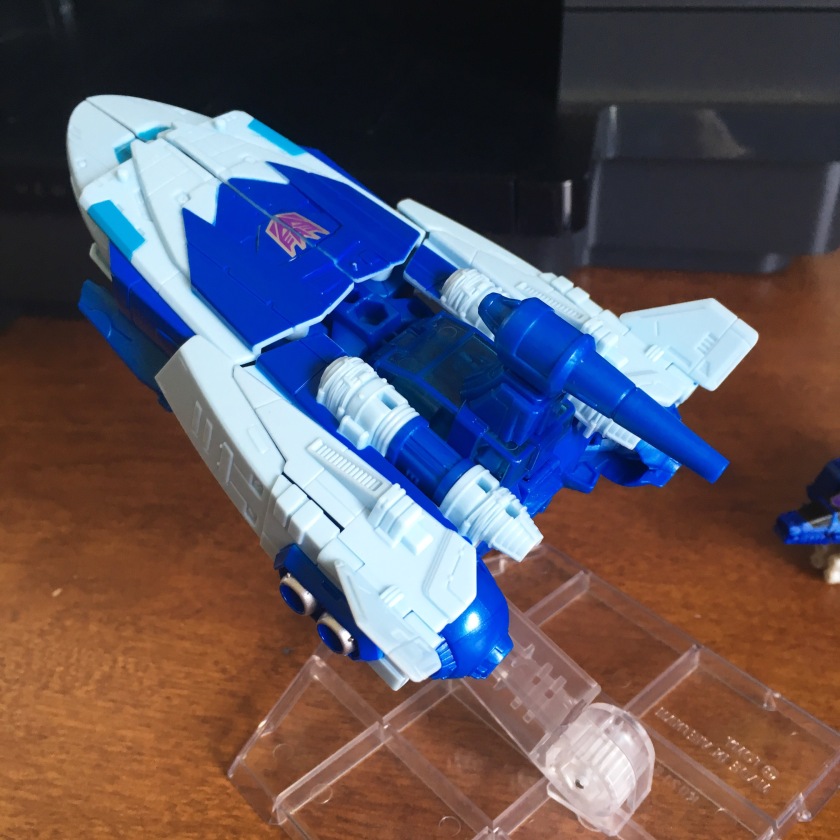 So here we have Deluxe Class Scourge.   He was the first of the Wave 1 toys that I opened up, but I can safely say he’s the least strong of the wave.  That’s not to say he’s a bad toy at all, he’s actually really fun.   The problem is, his wave mates kind of leave him behind.

In the G1 days, like Blurr, Scourge was a target master.  But like Titans Return Blurr, the fact that he’s now a headmaster or Titan Master is of little detriment.  Also similar to Blurr, he features a somewhat mono-toned color scheme, but this time in striking cobalt and light teal-robin egg blue.  It works very well for him. 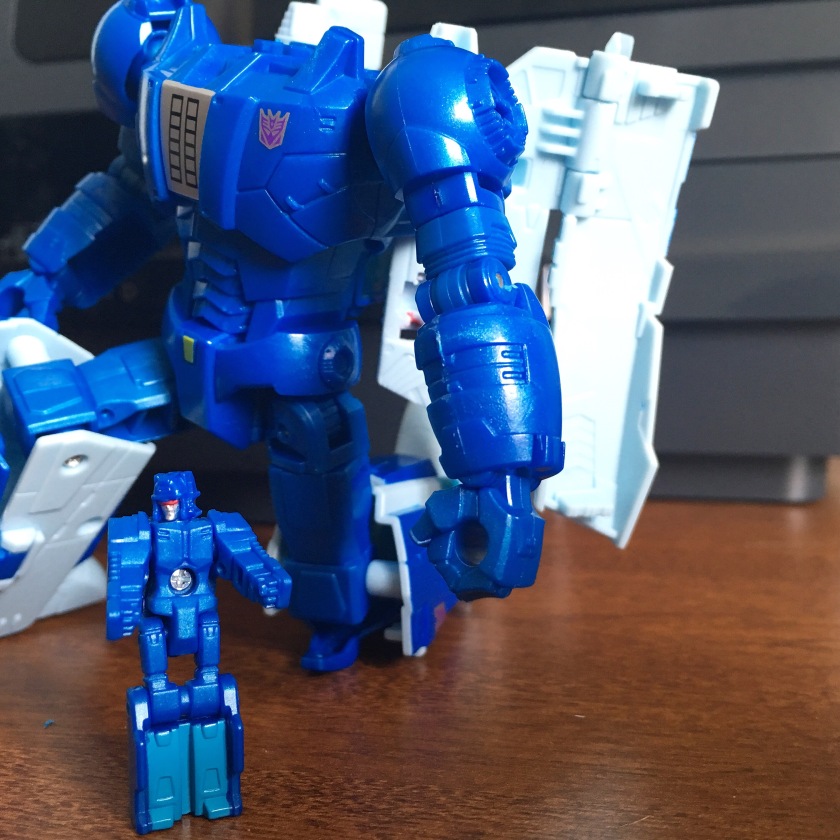 His once Target Master, now Titan Master Fracas remains a nice added play factor.  He’s done up in a similar color scheme but with a nice red visor which adds a nice touch to such a small figurine.  Similar to Blurr as well, Scourge’s antenna is retractable for when Fracas is in robot mode. 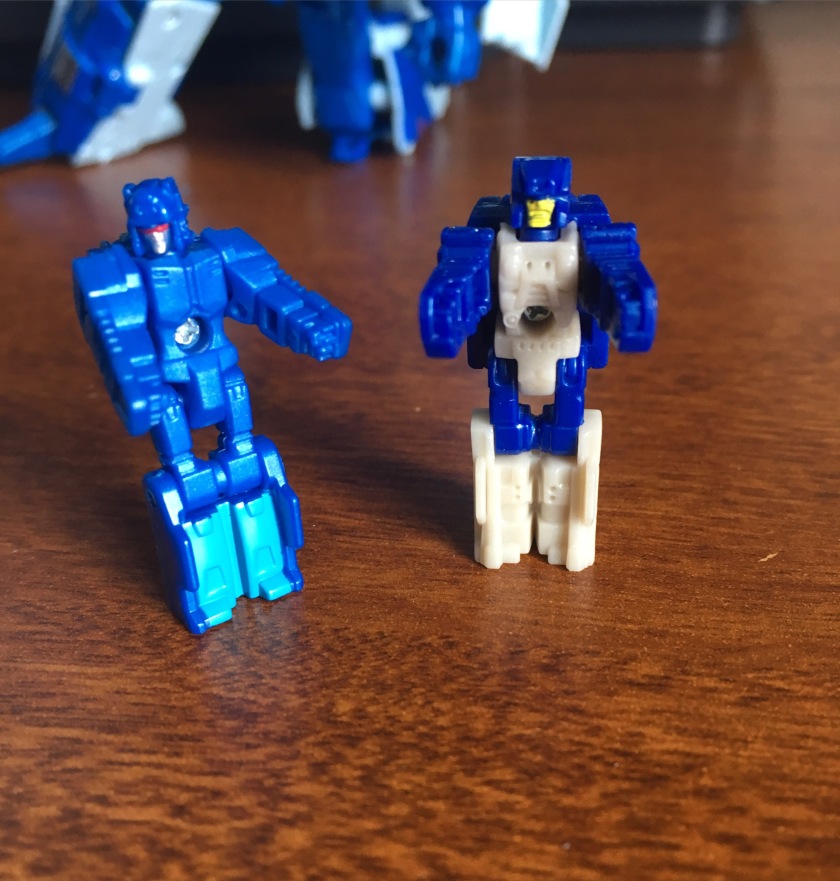 In continuing with the idea that a single packed Titan Master tends to match the colors for a deluxe class figure, here we have Terri-bull (Horribull) next to Fracas.  The blue’s match very well. 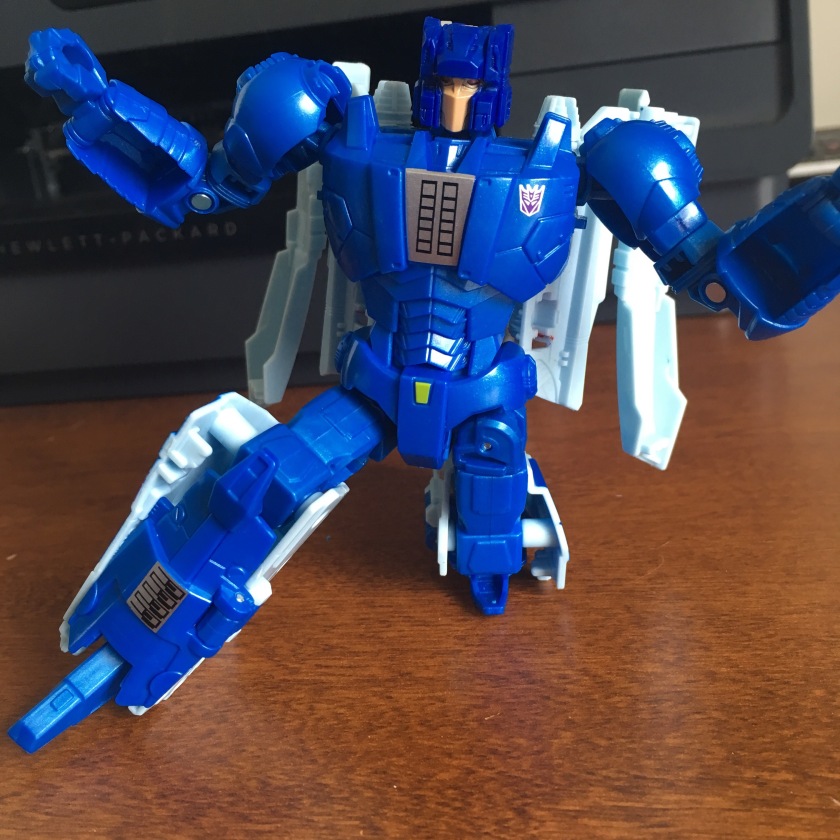 I like this.  Where as Takara is packing each deluxe figure with the “Partnertron” vehicle, Hasbro is leaving it up to the consumer if they would like to add on to the toy or not.  Both are pretty sound marketing concepts, but I find Hasbro’s more fun.

Unfortunately, there is a bit of a common flaw in the toy.  The Titan Master socket uses pressure panels to hold the head in place, and they are just a touch weak creating a somewhat “bobble head” like loosens in when handling the toy.  It’s not a major deal-breaker but just something to be aware of.  I’ve picked up two Scourges at this point (I want two Hasbro’s and one Takara so I have Scourge and his sweeps), and both have the issue.  It’s pretty clear the problem is universal.  We’ll see if Takara resolves the problem.

Scourge, like the rest of the deluxes, comes with a pistol and a large weapon that allows a Titan Master to ride and/or operate the weapon.  Another fun play feature, and allows you to utilize more than one Titan Master per toy.  Combine the pistol and the rifle and you get a triple barreled gun akin to Scourge’s G1 weapon.   Neat!

Transformation is simple yet engaging, featuring a pull out rail system for the waist, fold and hid legs and shell-former-ish wings that peg the arms in and keep them locked in place.  The end result is a space boat/jet like design very similar to the original toy and cartoon design. 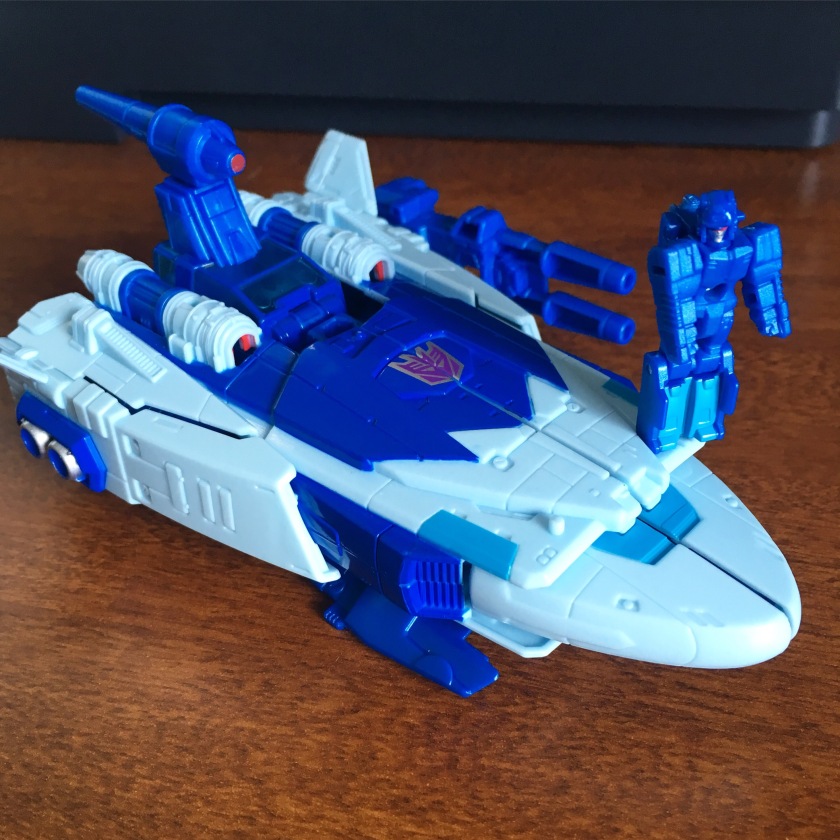 As you can see there are still plenty of Titan Master pegs on the body of the ship to attach other guys, as well as a cockpit for Fracas to sit in.

It’s a nostalgic call back to the G1 character which is a total treat.  The panels take a little working with to peg in seamlessly but it’s easy enough once you get the fell for it.

Of course, any other Titan Master can be attached to Scourge, and the point of the line is that you’re free to mix and match how you want.  I tossed on Crashbash just for kicks. 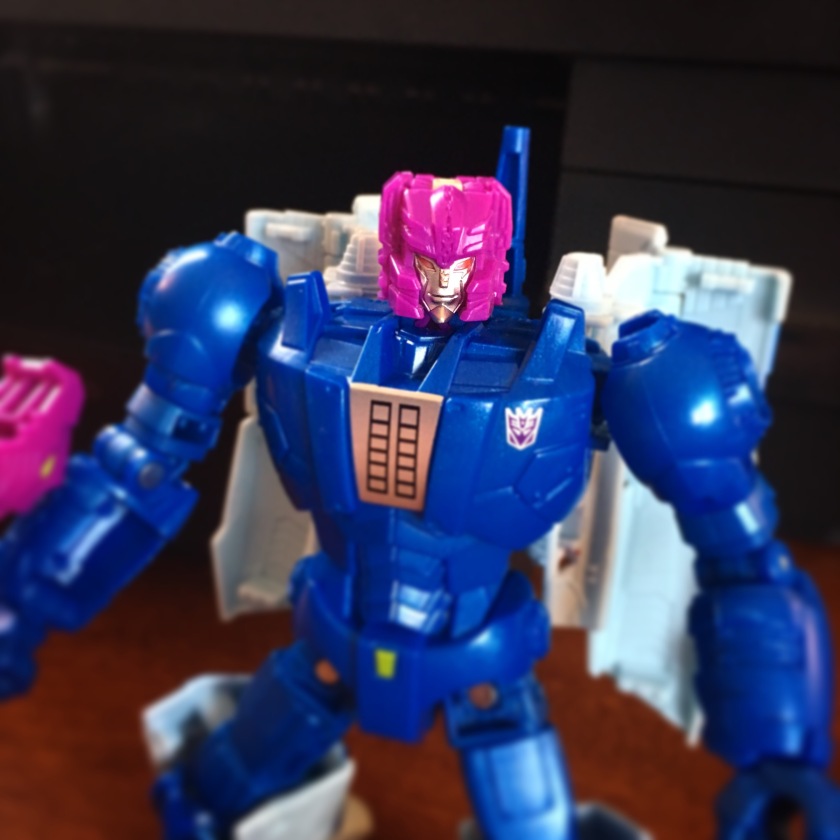 So in the end, Scourge will likely be passed up by some of the more fickle collectors out there, but for those of us enamored with the line, he’s a solid and fun addition to the crew.  He’s also a prime candidate for army-building, should you want to fill your house up with Sweeps.