I’m really not sure I’ll ever find the last wave of deluxes for The Last Knight, but I’m also pretty sure I don’t care.  To me this line peaked with Megatron and these two Voyagers, so meh.  So yeah, Scorn is outstanding.  I mean, his old AOE Deluxe class was  also the highlight of the AOE Dinobots, so it’s not a huge surprise, but with an all new, bigger and better design, he sort of steals the spotlight.  Pretty impressive seems I don’t  remember if he even shows up in the movie…

This is a complete overhaul of the character, not just an upscaled version of the deluxe.  Everything has been improved upon.  Even his tail/whip/”sword” arm and segmented joints implemented.

His head sculpt is redesigned to be more accurate to the movie appearance as well. The chin section seems just a touch too long, but otherwise it seems spot on. 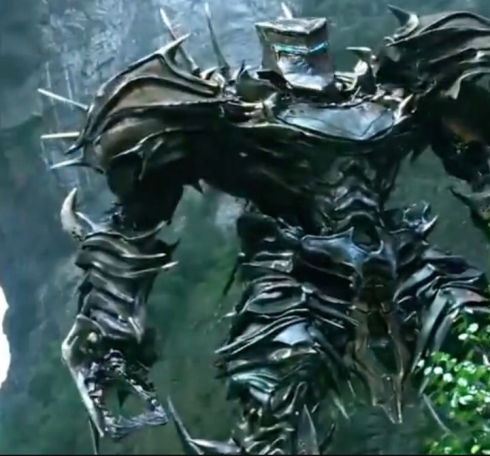 Naturally, where he really shines, is his dino-mode, which is leaps and bounds above his AOE toy.

With better articulation all over, and a more accurate movie appearance (which is pretty hard to do with a Spinosaurus, Scorn gets his triple spike fins like he had in AOE!

He’s just a fantastic step up.  The neck joints and tail joints really help to give him a more organic ability to strike a pose.  It’s worth saying that i think he would have benefitted from having his central core piece molded in the same red so it’s not just a grey square in dino-mode, but it’s not a huge issue.  Also his robot arm basically just tucks under his chest, which isn’t SUPER noticeable, but it’s there for sure as an arm-belly.  This line has been a bit of a mixed bag, but these new molds have been a total blast. 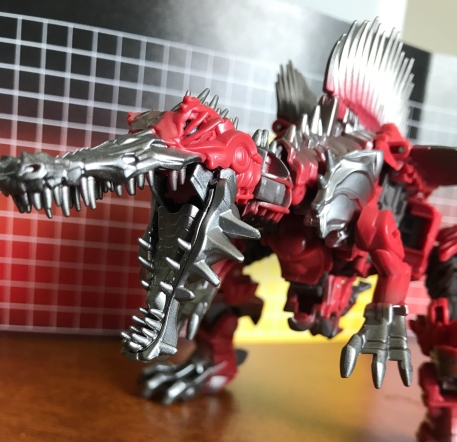