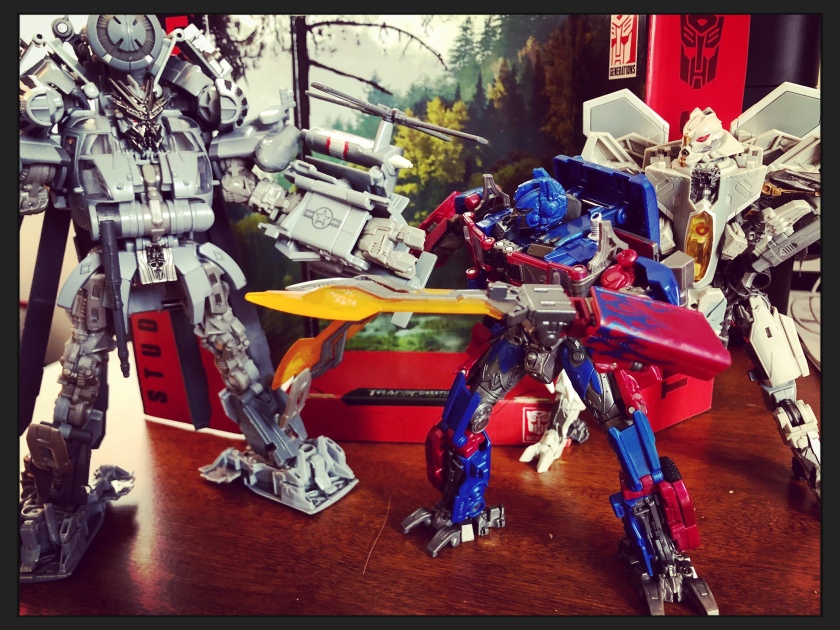 Translation: I’m behind and I’m gonna knock out the last few figures in one shot.

This Studio Series line seems like it kinda crept in out of nowhere.  With the internet, these days news on toy lines tends to drop months ahead of even the production start, but with the Studio Series, official news hit at Toy Fair, and the first figures were available that weekend.  Since then I’ve posted on most of them, including Grimlock and Blackout, so let’s take a look at the last three real quick: Optimus Prime, Starscream and Ratchet.

Like the rest of the line, Optimus features a brand new mold that takes hints from both the ROTF Leader class, his new Movie Master Piece as well as some well engineered panels that fold into and out of sight for both modes. 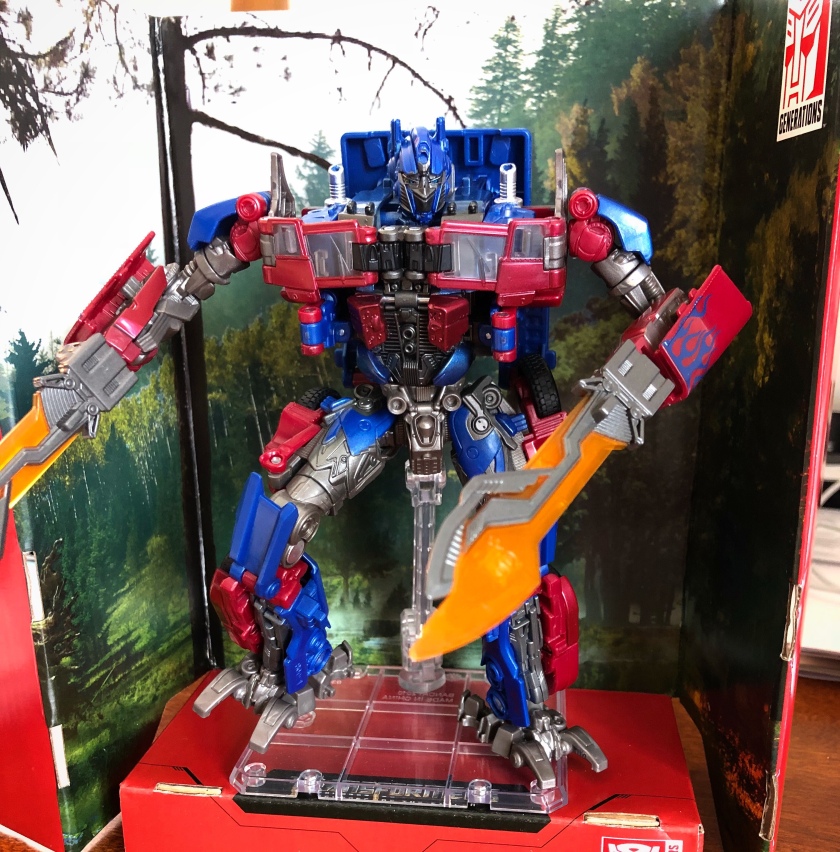 His designated movie is Revenge of the Fallen, so he comes with duel energon swords and a woods-battle back drop.  He does not come with his brutal face ripping hooks that he uses to tear poor Blackout/Grindor’s face asunder. 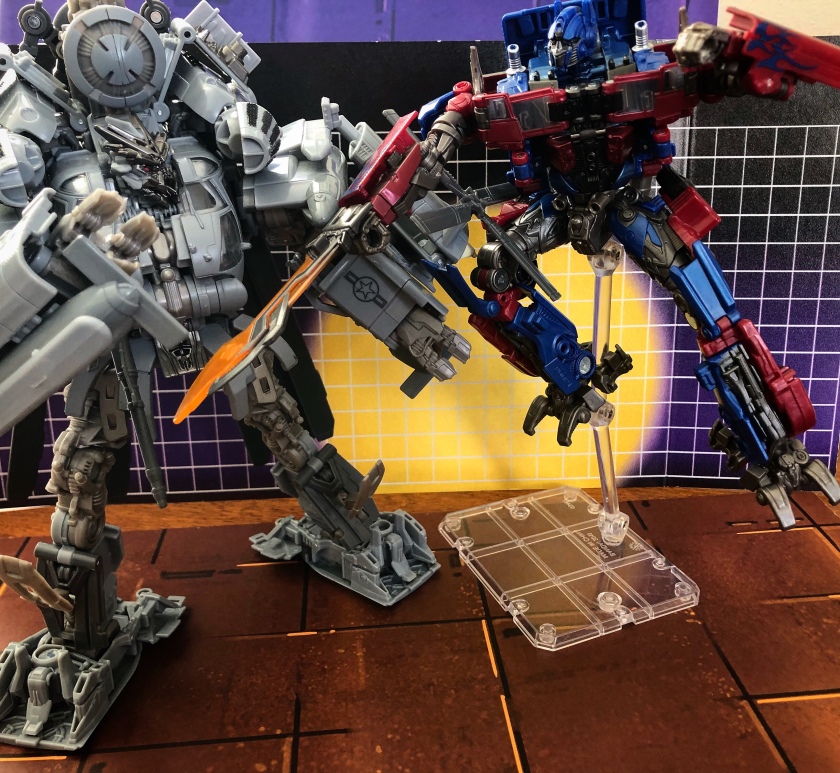 As a voyager, he feels solid and his complexity is toward the higher end of the spectrum without being off-putting, though like the MP toy, a lot of small panels rotate around.

His truck mode is solid and holds together very well.  He’s a bit plain-Jane and the colors seem darker and washed out, which has more to do with his robot mode needing to look dirtied and beat up.

Starscream, is another gem in the line.  While the actual design for the character isn’t the most popular, I think it’s unique and I do like it.  The problem is, the design never really translated well to the toys.  Most of the voyagers were basically goofy looking diamond shapes with a head on top. 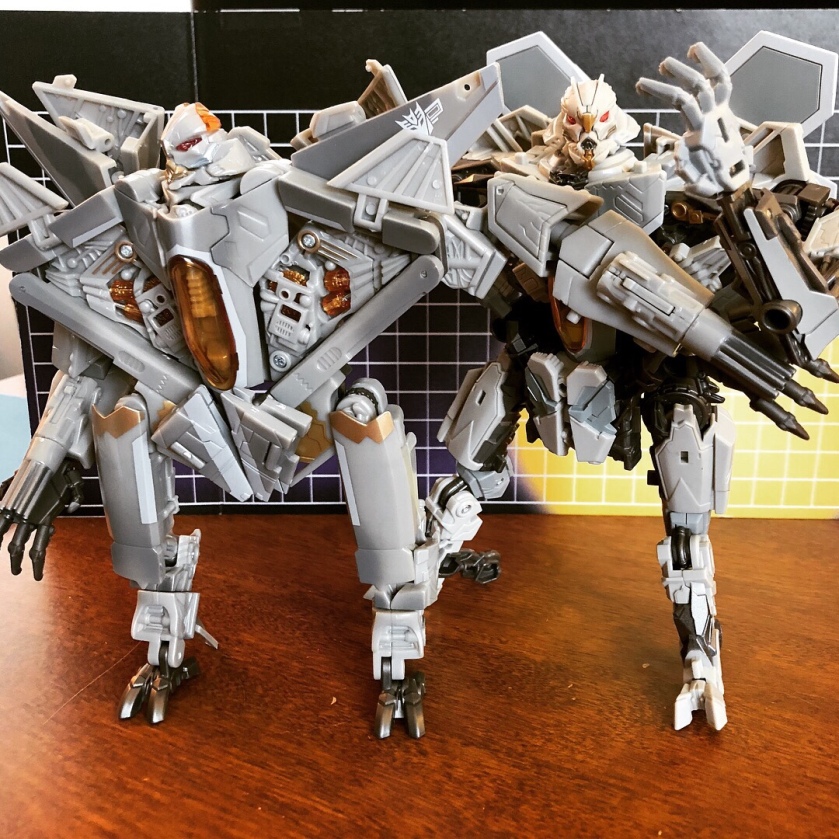 Studio Series Starscream has a much more elegant and screen-accurate look.  His joints are all strong and he has a TON of pose-ability.  Plus his heels are made from his landing gear so they’re sturdy and solid and allow for fantastic stability. 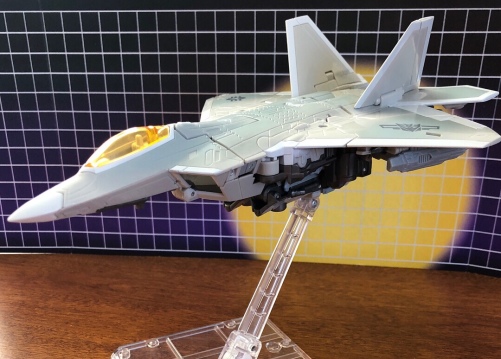 He also transforms incredibly well and packs up into a gorgeous looking F-22 Raptor.

He’s dwarfed a bit by Blackout but then again, so is everyone.  Again the focus of this line is scale accuracy in robot mode, so even though he and Prime are both voyagers, he stands a bit taller than Optimus.

Meh.  Ratchet is fine.  I mean he’s just fine.  He’s not amazing, he’s not bad. he’s right in the center.  He features a new mold but it’s similar to all the other Ratchet toys from the movie. 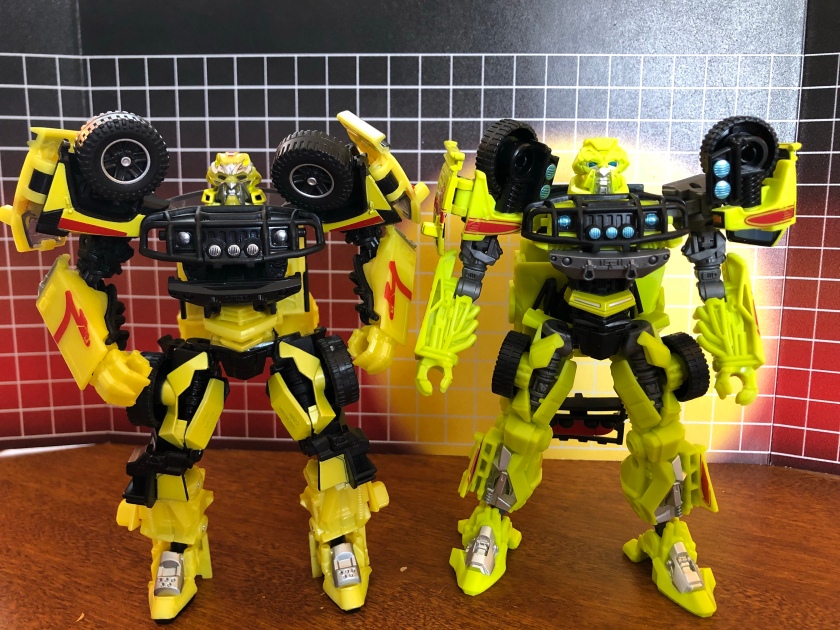 Unfortunately, Takara’s Movie the Best line features a much better Ratchet interpretation.  His yellow is less neon, his facial details are far more intricate, he’s just over all a better looking toy.  But seems MTB Ratchet will cost you a pretty penny, I have no problem offering up Studio Series Ratchet.  He does his job adequately well. 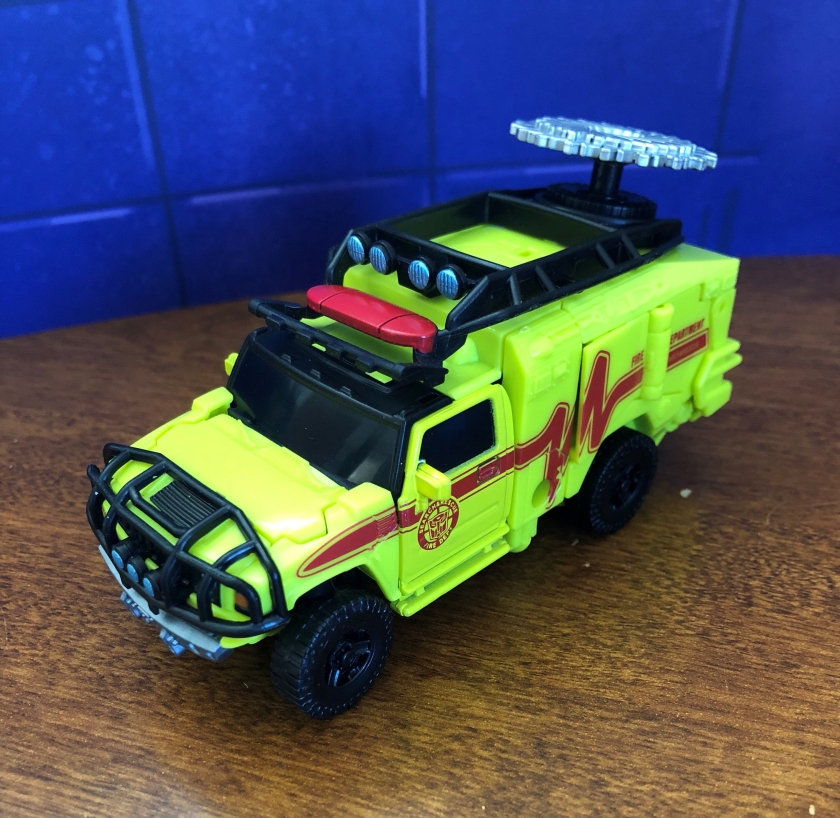 His transformation is straight forward and the truck holds together pretty well (although you can see one panel that gives me issues, it might be a QC thing, I haven’t seen widespread reports).   He comes with his buzzsaw tool which is nice, if not way too big.

Overall the Studio Series has been a great success.  While Bumblebee has a bunch of issues and is easily the most pass-able figure in the line, the rest really have far more strengths than weaknesses.  Ratchet Crowbar and Stinger all bring nice updates to the deluxe sized characters (Stinger being a fantastic design), the two voyagers, Optimus and Starscream are very fun, well designed toys that look amazing in both modes.  The leader class figures are the home runs here, with Blackout being outstanding and Grimlock being a desperately needed, glorious update to his previous toys.  Overall I’d recommend the whole line for completionist collectors and the good ones to those who just pick and choose.

@heyitsbenrobinson here’s the clip!
🙌🏼💪👌🏻
Time to open these little gems!
Love that you can use an S style track layout for Omega Supreme’s base mode. It makes me want more tracks for him.
Man this One-Step Repugnus from Cyberverse is awesome. For so simple a toy, he packs a lot in! . . . #transformers #cyberverse #repugnus #toycollector #realmofcollectors #toyphotography #toypics
So I spoke too soon I guess. These Cyberverse Scout class guys don’t “transform” other than Ramjet actually having a Jet mode. The robot modes look pretty good though and seems they’re priced at essentially a Happy meal toy (without the McDs junk food) I don’t think there’s much to complain about. Not for everyone but I dig the character variety.