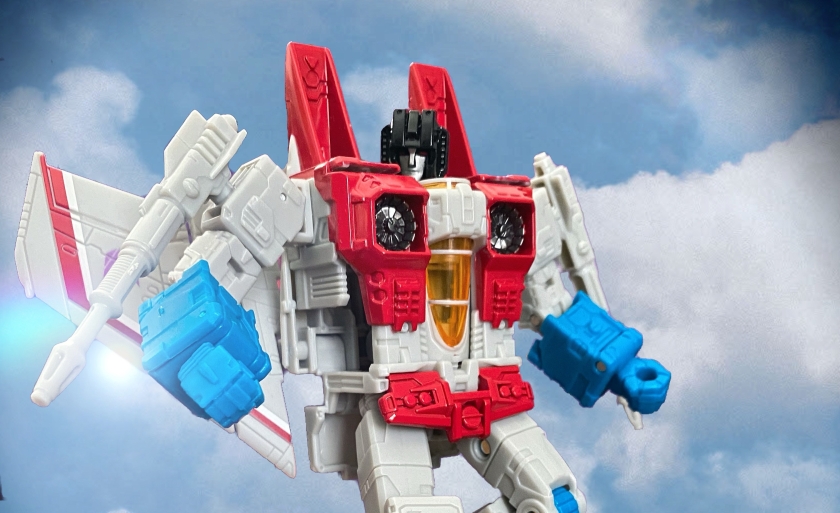 Welp. Earthrise has begun. Like the Combiner Wars trilogy, War for Cybertron will be a trilogy of toy lines as well. Siege focused on the civil war between the Autobots and Decepticons on their home planet of Cybertron, and now Earthrise will focus on the war as it transitions to Earth. This means the toys will have Earth-based alt-modes instead of the more vague “Cybertronian” modes of Siege. So let’s look at the treacherous Air Commander: Starscream as he appears in Earthrise!

Siege Starscream, and the resulting pluthera of seekers that followed used the “tetra-jet” design which, in my opinion, was one of the best designs out of the line. Earthrise Starscream utilizes his classic and adored F-15 alt-mode and as such, takes a LOT of cues from the Classics Starscream/seeker design. This is a very good thing.

Transformation features many of the same steps as the Classics toy, including the nose cone swivel, chest panel hinge and swivel hinge on the wings. The legs now fold up into themselves instead of collapsing, and the arms tuck in with a more complex system, but otherwise they used what works and improved on it.

Starscream retains most of his articulation from his Siege form, with the only major compromise being the loss of the waist swivel. Given the design of the chest/torso it appears they had to scrap it so that his robot mode holds together. Otherwise his joints are all super tight and secure. His paint applications are spot on perfect as well. Starscream features no “weathering” unlike his Siege counterpart. I don’t believe the concept has been entirely dropped for the Earthrise line but I think Hasbro for sure toned it down a bit.

Height-wise he’s the same as the current scale voyagers. As a reminder to those wanting to gripe about sizes, remember that the the scale’s have more to do with parts count than actual size at this point. I also threw in some Flame Toys kits to show where they measure up (and because I had the picture sitting there on my phone…)

F-15 Mode is spectacular as well. Neat/clean lines, everything is tucked away, and pegs in securely. The Null Rays plug in securely as well, so you don’t have floppy laser guns hanging off him. Strangely enough his display stand peg-hole is under the waist skirt flap, which is a little odd, but works just fine.

He’s surprisingly big compared to the Tetra-jet mode from Siege, but that’s a good thing. It’s a nice, solid, large F-15 toy. Noticeably missing his iconic blue nose-cone. I’m not sure if that will have a running change moving forward or not. It’s nothing that bothers me much, but it’s worth mentioning.

This is an excellent Starscream. The Classics mold was popular for years for a reason, and this toy improves on it in multiple ways. Since opening him up, I really haven’t put him down. Transformation is fun, both modes are gorgeous, there’s really no down side. There are some compromises in the design however. No waist swivel being the most noticeable, but he also features no landing gear for jet mode, which is strange to me, but also nothing I can’t live with. This is the voyager Starscream you’ve waited for. I’m looking forward to the rest and as Hasbro has the tendency to milk a mold, I have no complaints this time. Just keep your fingers crossed for a Sunstorm at some point.