If there was one other franchise that shaped my childhood besides Transformers, it was the Ninja Turtles.  I got the original Michelangelo toy for Christmas from an Aunt, yelled out “AWESOME, IT’S A TEENAGE MUTANT NINJA TURTLE!!” and then watched as the whole room looked at me with blank stares, like I just yelled out in German or Dutch or something.

As the Transformer Franchise has continued to gain new movements and new toys, the TMNT Franchise hasn’t been so lucky.  There have been lulls, there have been bombs, and there have been stretches of nothing at all.   Then a company called NECA comes along, and creates a line based on the original comic book, delighting older fans world wide….then the promptly cancelled the line.  But not before the four heros got a make over! 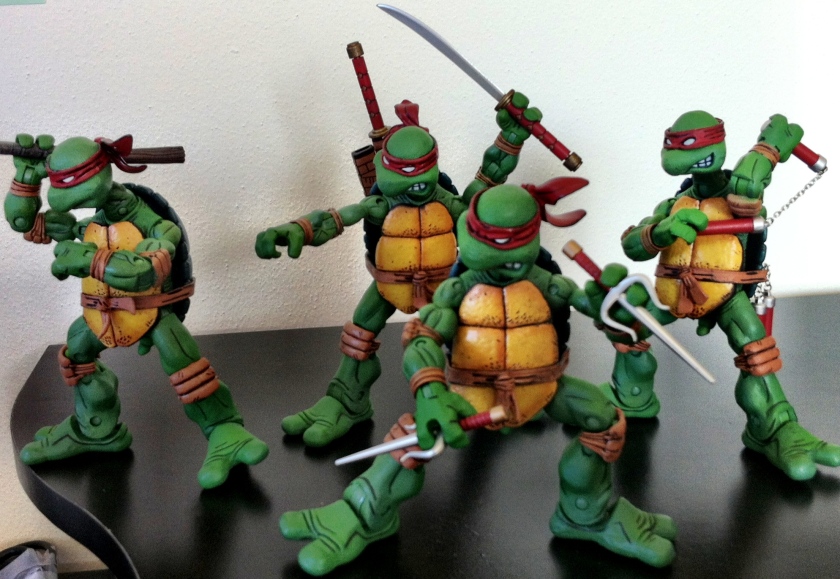 Each Turtle features 20 points of articulation, so a variety of fantastic poses are available.  You may be wondering why they are all wearing red, well, in Eastman and Laird’s original comic, all the turtles wore red, the colors were added when the TV show aired so that kids could distinguish the turtles better.  Meh I say…meh.   And the scene above is based on the famous issue No.4 cover which was used for the even more famous (and destroyer of many of my Summers) TMNT game for the NES:

Unfortunately, Donatello’s arms in the cover art seem almost physically impossible, so I had to improvise.  Still, pretty close.

I’ve got a duplicate Leonardo, which I’ll be Ebaying in a little while, so keep an eye out!