You know, you could put Swindle’s head on a piece of foil crumpled up and I’d still probably like him! 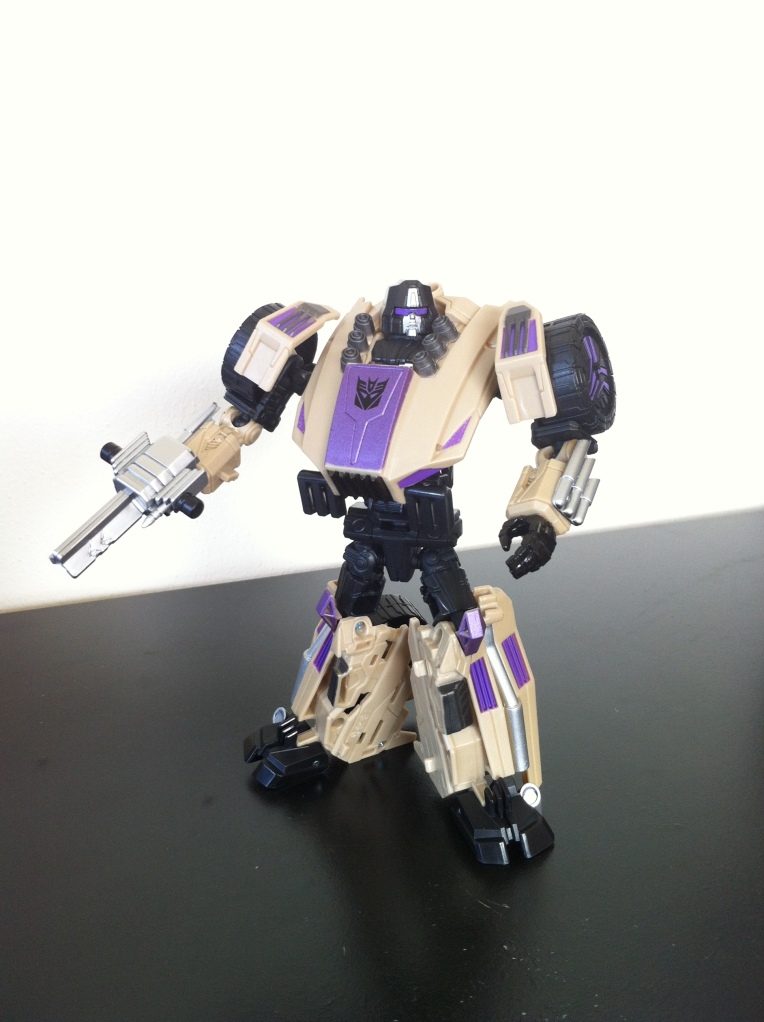 The thing is, after Vortex, Blast Off, and Brawl who are noticeably on the smaller side of the Deluxe scale – Swindle is  what I think most people consider “normal” sized.  It makes him bigger than the rest, but frankly, I’m fine with it.  Who says he NEEDS to be smaller than the other four.  G1 were all the same size after all, so if Swindle is a bit bigger, that’s fine in my book.

Now, here’s the stock photo of him: 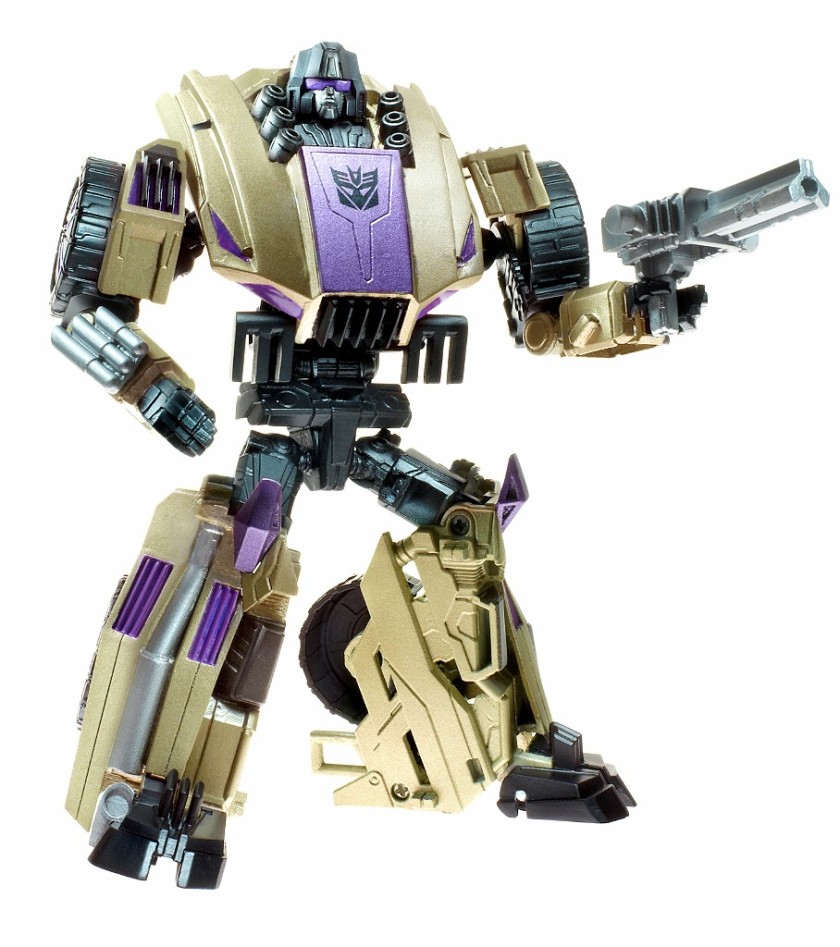 You’ll notice his shoulders are WAY too low on the stock picture.  Well, this has to do with his odd shoulder assembly.  They technically should be able to rise up more, but there’s a hunk of plastic sort of stopping the motion.  Its kind of odd.  But seems my Onslaught was busted right out of the box (more on that later), I decided to hack up Swindle’s shoulder a bit.  I wanted a smoother result, but I kind of butchered it:

But seems the socket pin was already loose and wouldn’t hold, I went in and tightened that with some super glue while I was in there.  Once I pick up Regular Swindle, I’ll try this again, but I’ll probably leave G2 version in the box.

The bottom line is though – I think it makes him look MUCH better with higher shoulders: 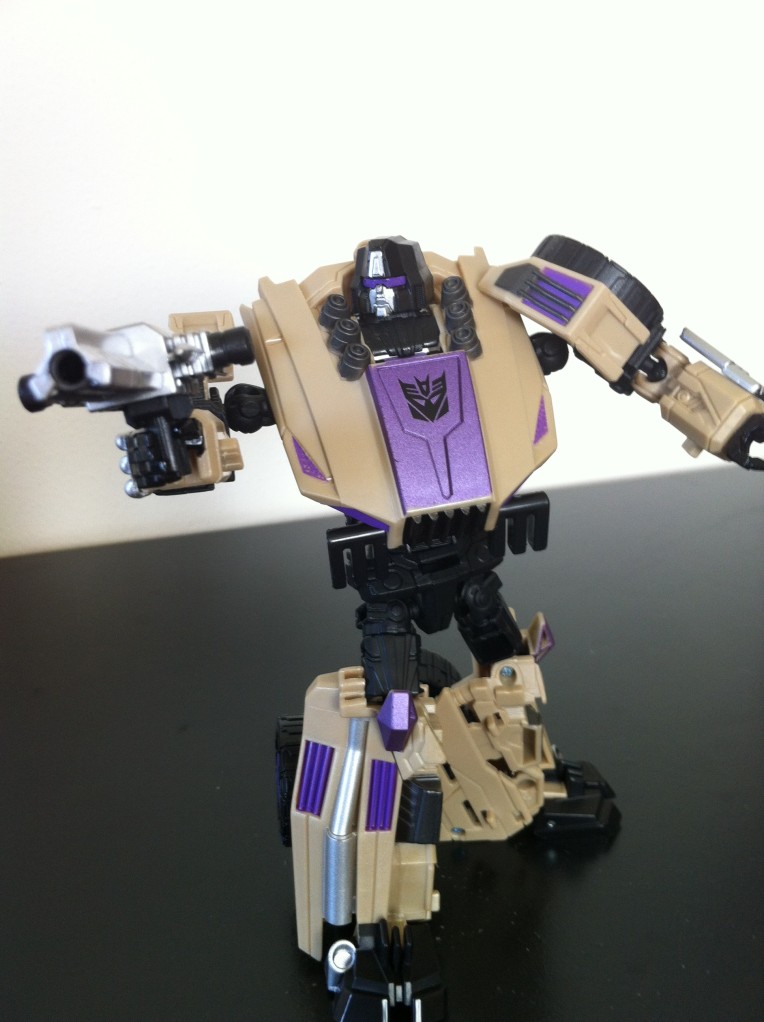 I do really like his design.  The head sculpt looks great, and I really am a big fan of the little thrusters like like Jazz has – 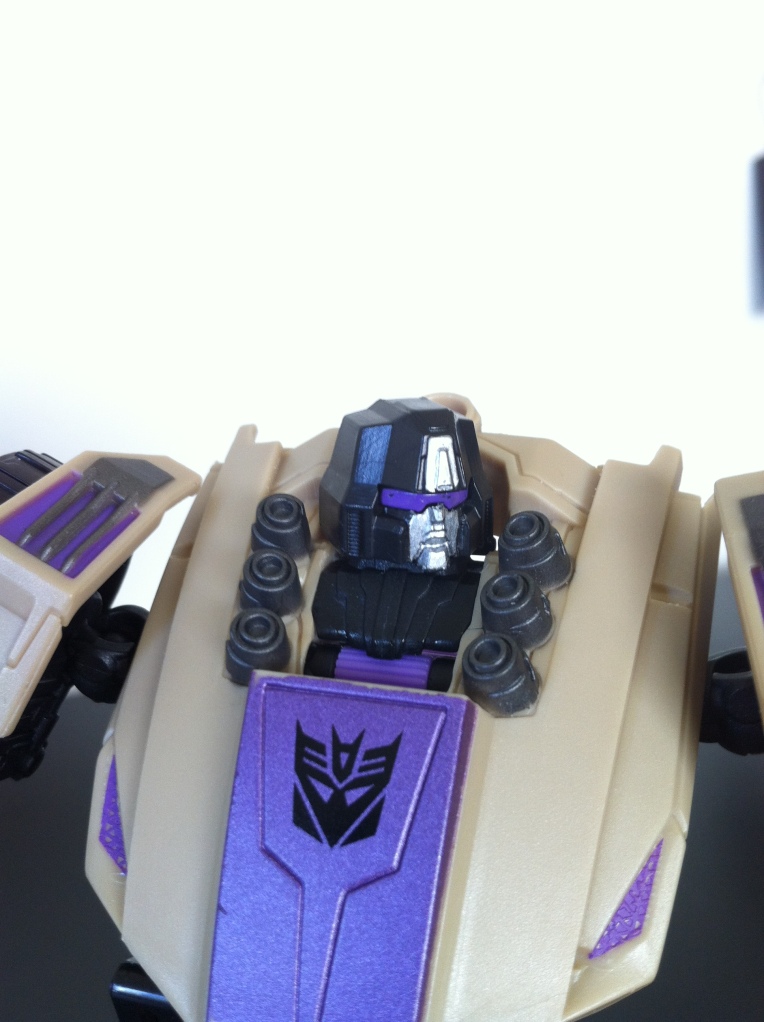 Over all he’s just a great figure.  The hood of his “jeep” could stand to be a touch smaller, but I honestly don’t mind it at all.

His Alt-mode is really cool too – not really a Jeep obviously, but a fast looking Cybertronian SUV kinda look: 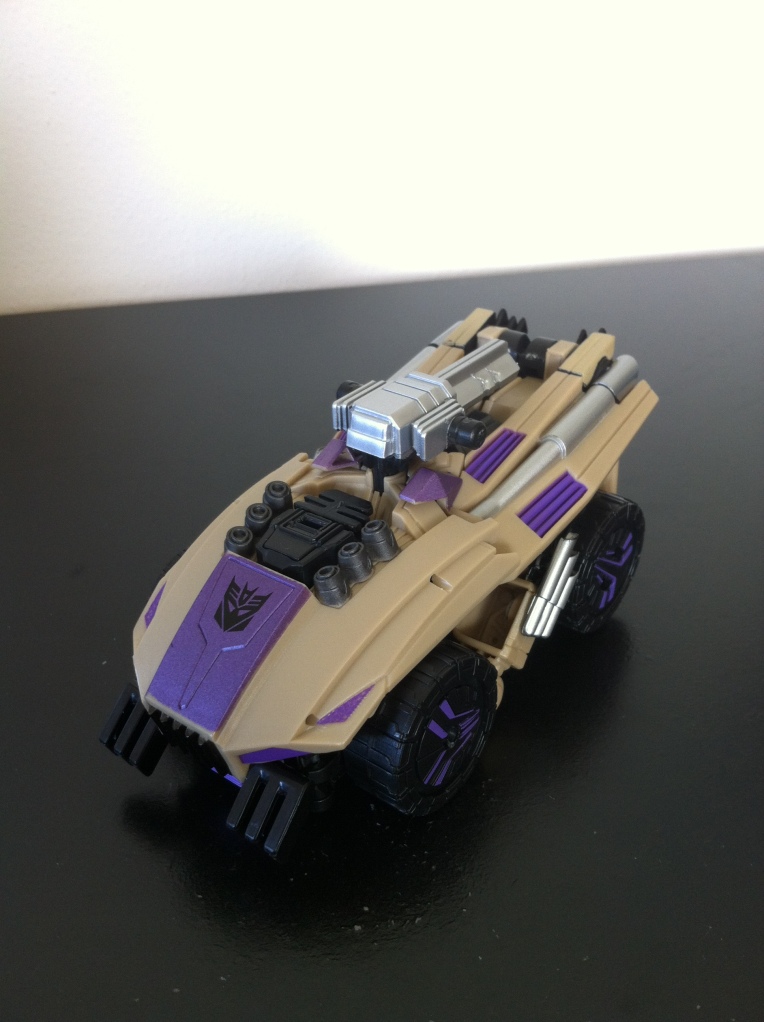 Again, I don’t really like the idea of the weapon just popped in the roof of the vehicle, but with Swindle, seems he’s a Combaticon, I’m okay with it, but I generally keep it backwards so it looks more like an engine block.
Here’s ‘Bee and Swindle Side by Side – he’s got a big alt-mode too, but again, seems he’s more on size with a deluxe, I’m not complaining. 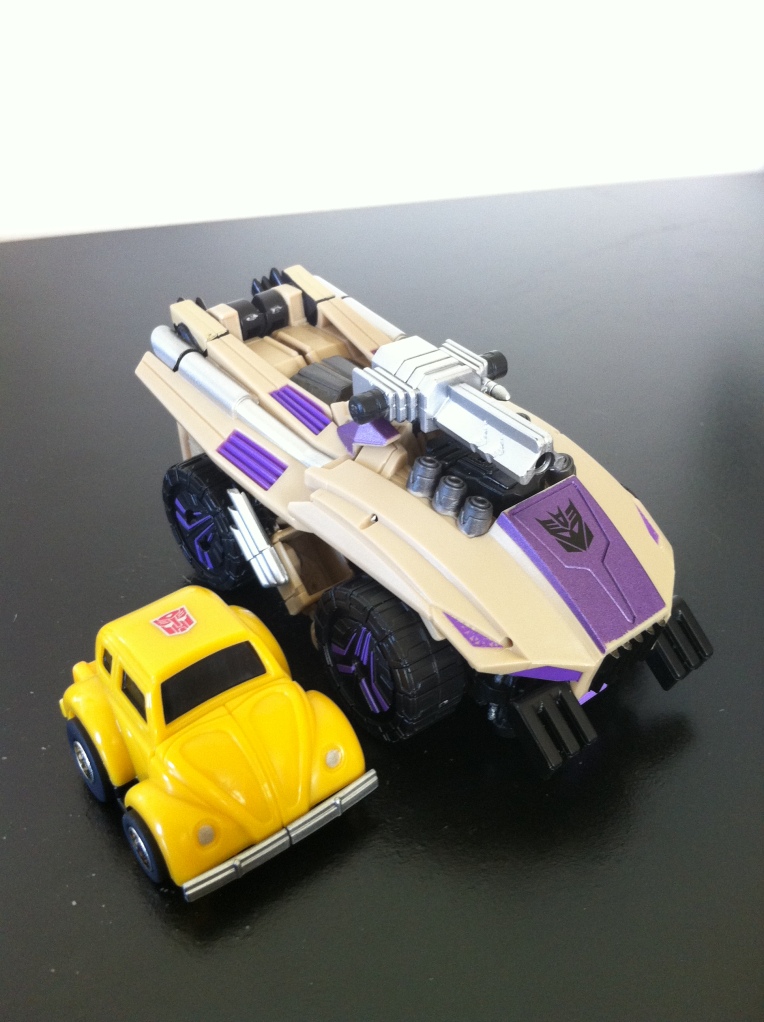 The one aspect I really find interesting and I applaud Hasbro for its design, is the double slotting mid-car for the foot angle – you basically snap the hood section in the lower slot, allowing for a more angled foot. 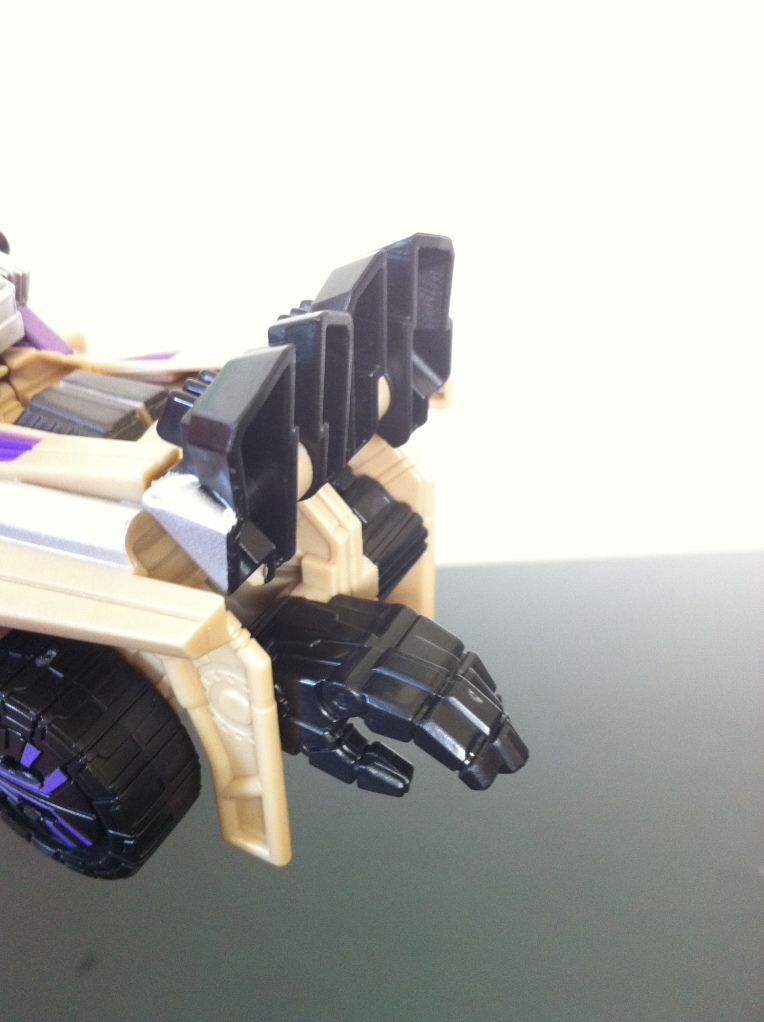 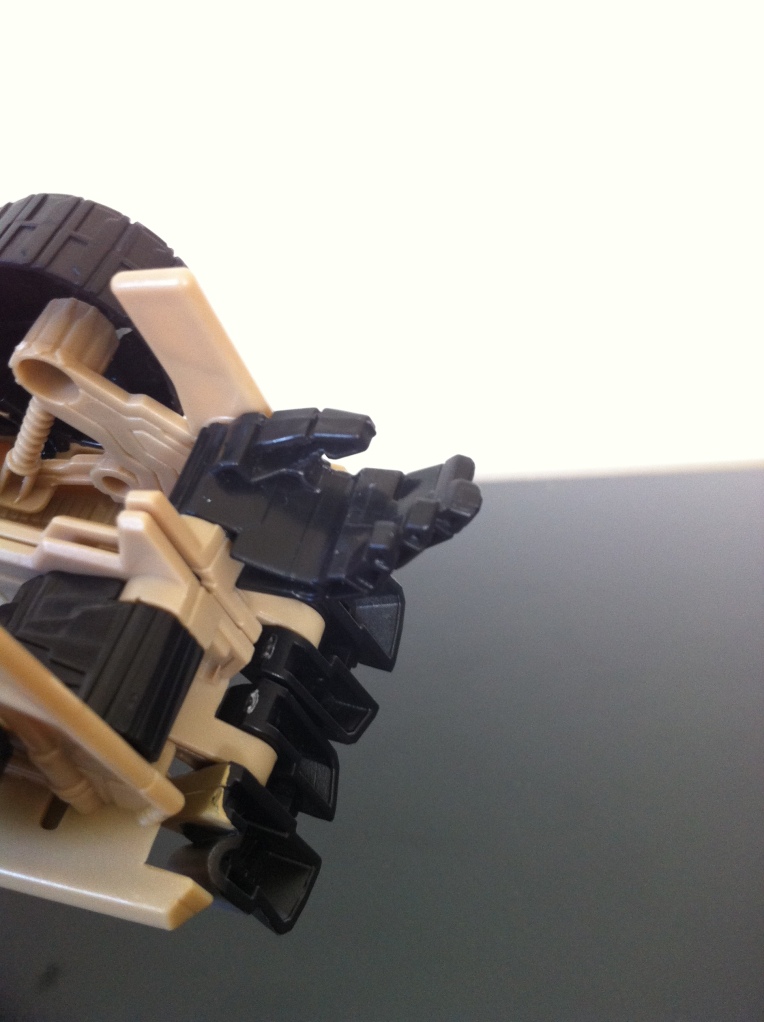 They’re basically giant versions of his actual hands, but they look WAY more natural as an open-palmed look, and really, these should be on Vortex, because I’ll never use Swindle as an arm, he’s a leg.   He’s always a leg.  But again, its more a complaint on Vortex.
So there we go – Swindle’s easily my second favorite of the set after Onlsaught, who’ll I’ll get to later today.