Okay, right off the bat, let me just state that this was “rushed” a bit.  The little guys don’t really warrant anything other than pictures, and Fort Max, well…we’ll get to him.  So I apologize that some of the pictures are not that awesome. I’ve been a bit stressed with work lately and I have to say, thank God for Transformers, they’re the only thing keeping my stress levels down!….also my wife and cat.  *wink*

Anyway, on  to the Kabaya Gum Toy Transformers! 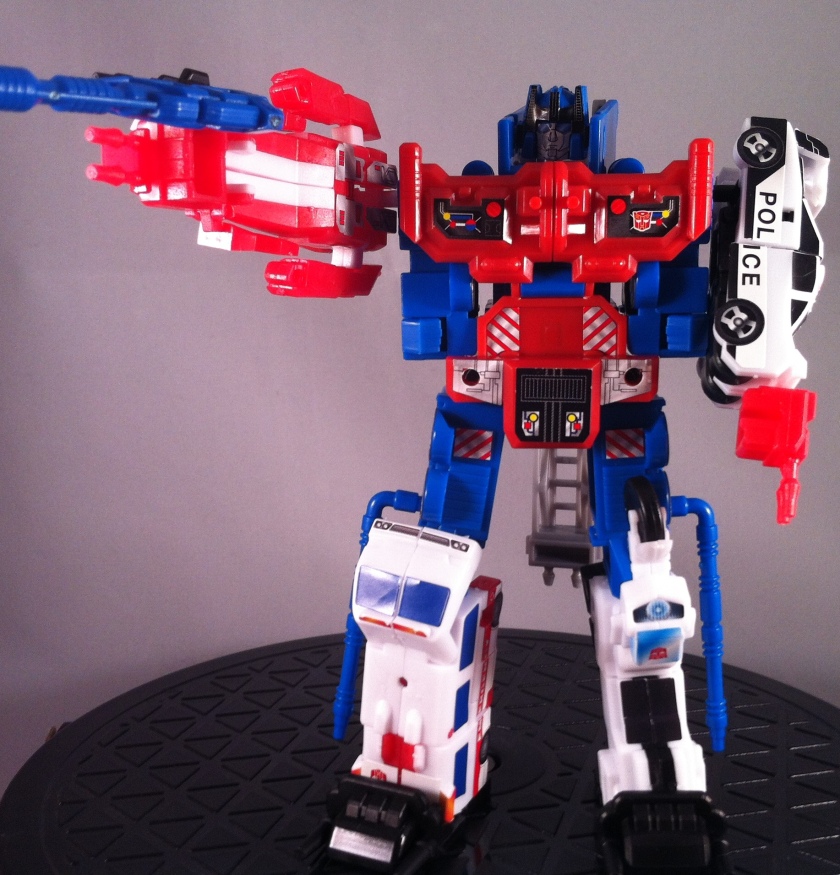 As a quick history lesson – in the US, there are “change machines” where you put in a quarter and get a tiny little plastic toy.  In Japan, that industry is HUGE and the “toys” range anywhere from simple plastic bits, to relatively complex and large.  They aren’t just some change grabbing gimmick, there are entire stores of just these “Gatchapon” machines like an arcade.  Some really cool little toys can be found, and luckily, Kabaya, a popular manufacturer, has teamed up with Takara Tomy to produce some Transformers!

Let’s go “small to large”.  In a happy stroke of luck, I found a set of six toys at a Japanese grocery store by Chicago.  This set was the “Guardian” combiner team:

Yep…that’s Streewise on the front there.  That hole allows you to see which member you’re getting (if buying in the store like I did), which is pretty handy.  The back and sides show who’s all available to collect as well as the combinations of the team:

Basically, this set includes all four Protectobots, plus two new members: Heatlock and Skyfeather (or Skyphaser, the Katakana is debatable..and Skyphaser sounds cooler) – who combine into a new gestalt, “Guardian”.  However you’ll see on the back, Hot Spot is also available, but he’s considered a “Large” toy, so he’s optional, but not necessary – we’ll get to that.

Within each box, you get two sheets of parts like a model kit or gunpla kit, a small instruction sheet and this:

The titular “Gum”.  Being they adventurous type, I’ve tried a piece.  I have bad news for anyone who bought these toys for the gum – you’ve been had.  This stuff is horrible.  The flavor, which is vaguely sweet, lasts approximately 3 seconds, then becomes a very bland, anti-acid-y exercise in jaw movement.   But seems they’re called “Gum Toys” I guess Kabaya had half a contractual obligation to throw something in.  Lol.  Anyway, so toss the gum in the trash, and start clipping pieces, we get:

Of course, given the price tag, don’t expect anything groundbreaking here – but  I have to say, they are excellent representations of their G1 origins, and oddly enough, somewhat more pose-able.   I really like the new guy,  Heatlock.  He’s bulky and Black with yellow, which is a cool look.    Along with the instructions, you get a sheet of stickers, which are used to apply the details.  (I had trouble with Groove, and his stickers ended up getting messed up pretty bad..hence his lack of detail.)

If this picture were at all clear and useful, which its not,  you could see that, despite the lack of paint (which would be impossible) they all have very well detailed head sculpts.  I really like how they did First Aid’s “hood” of his van mounting on his shoulders, it looks cool!

Their transformations are all nearly identical to their G1 versions, though Heatlock involves some pretty impressive upper torso spinning and folding.

Now, the downside is, the stickers are what give most of these guys any kind of details, and they’re not always the best quality stickers.   But as you can see, they’re not too bad.  Again though, the quality is sometimes sub-par due to the cheap nature of the toys, so Streetwise and Skyfeather have some questionable hinges that like to pop off a lot.  All of their guns peg into vehicle mode as well, and for the life of me, I don’t know why I didn’t show this.

He’s got a pretty cool head sculpt too, but again, they rely on stickers for any detailing.    So just these six alone are pretty cool, but if you want Defensor, you’ll have to hunt down Hot Spot, who’s more expensive, a little more impressive and looks pretty darn cool!: 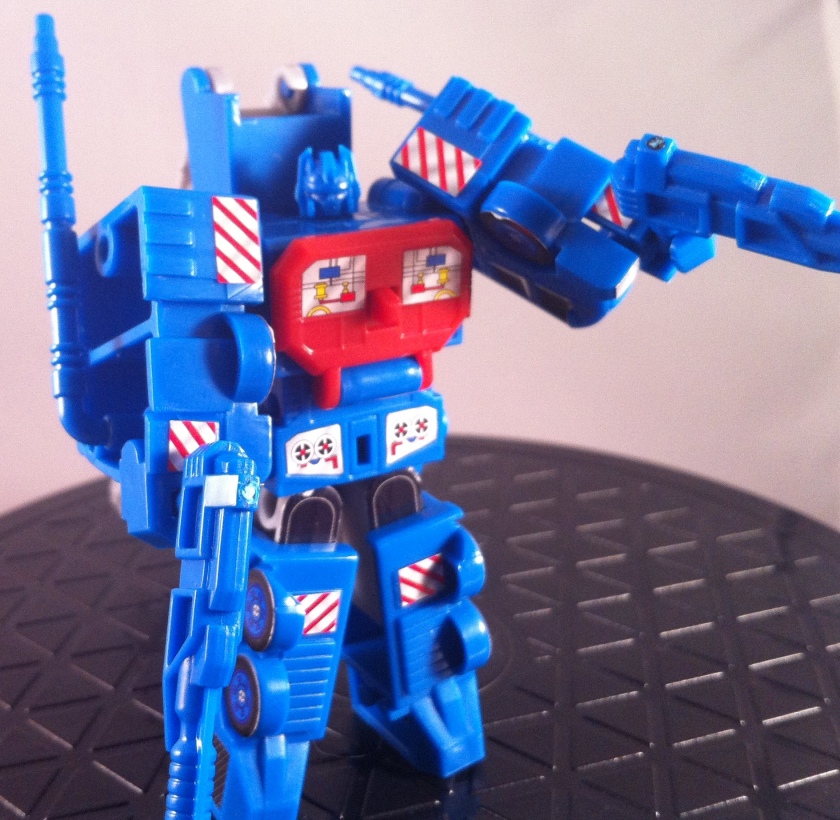 Hot spot comes in a larger box, and as such, his instructions are printed on the inside of the box itself:

Getting him transformed is actually a bit unique.  The top half sticks to the G1 style, where as the legs, you actually un-peg and attach into different slots closer together.  Also his ladder is removed and then repositioned as well.  So he’s  a little “parts-former-y” but the result is awesome:

The sticker quality is better too, which is nice.   Combining into Defensor is almost identical, but again, you un-peg the legs, and all that – 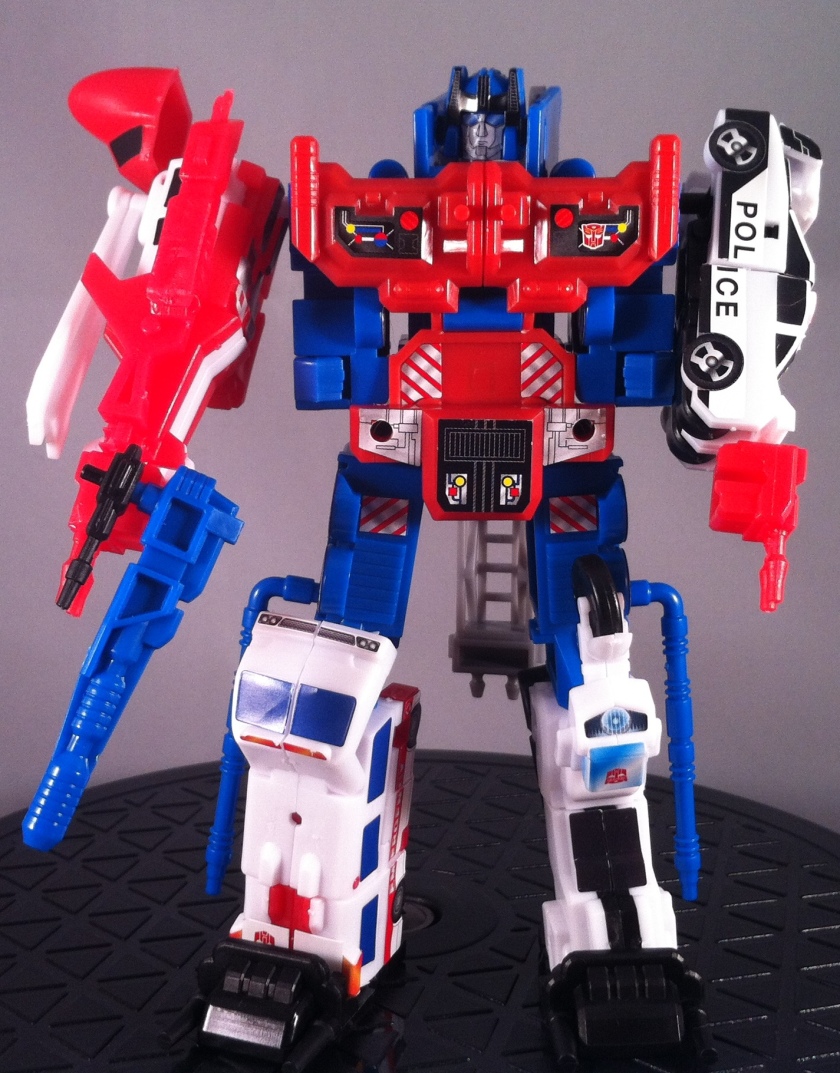 Defensor’s head, like on G1 Hotspot is tucked into the ladder assembly.  The head sculpt itself is molded into the plastic, but to get any detail, you basically put a sticker-face over the whole thing, which is a bit unfortunate, but in the end, it looks okay.   For a tiny little combiner (he stands smaller than a deluxe), he looks pretty great!  You can also combine Heatlock and Skyfeather to make “God Guardian” or as I call him, SUPER DEFENSOR!

So there we have the Protectobots! 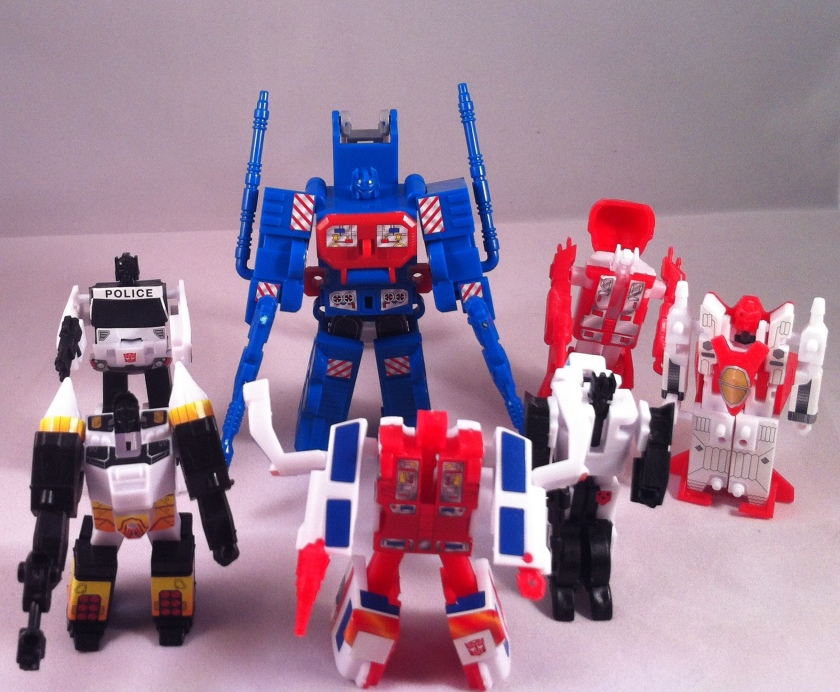 Fortress Maximus is what’s considered a “DX” or Deluxe toy.  You can actually get him at TFSource, or BBTS.  He comes in three parts, but you might as well just get all three at once, because by themselves they’re kinda boring.  Assembled though you have:

A very stunning, G1 accurate version of ol’ Fort Max.  Takara announced a month back the release of Encore Fort Max, with a price tag as big as the toy himself.  If you’re not willing to drop that much, for 40 bucks, you can have yourself a Voyager sized version with most (but not all!) the bells and whistles of the original toy.   Yes, I said Voyager sized.  I can’t believe I too NO size comparison pictures, but he stands head to head with the Classics Inferno/Grapple.   And seems IDW has kept Fort Max alive after LSOTW and awake again:

Frankly, he makes a PERFECT stand in for my MTMTE Shelf…though lets be honest, IDW’s ‘Max is way more bad ass looking.

But this Fort Max has “Full Gun” mode: 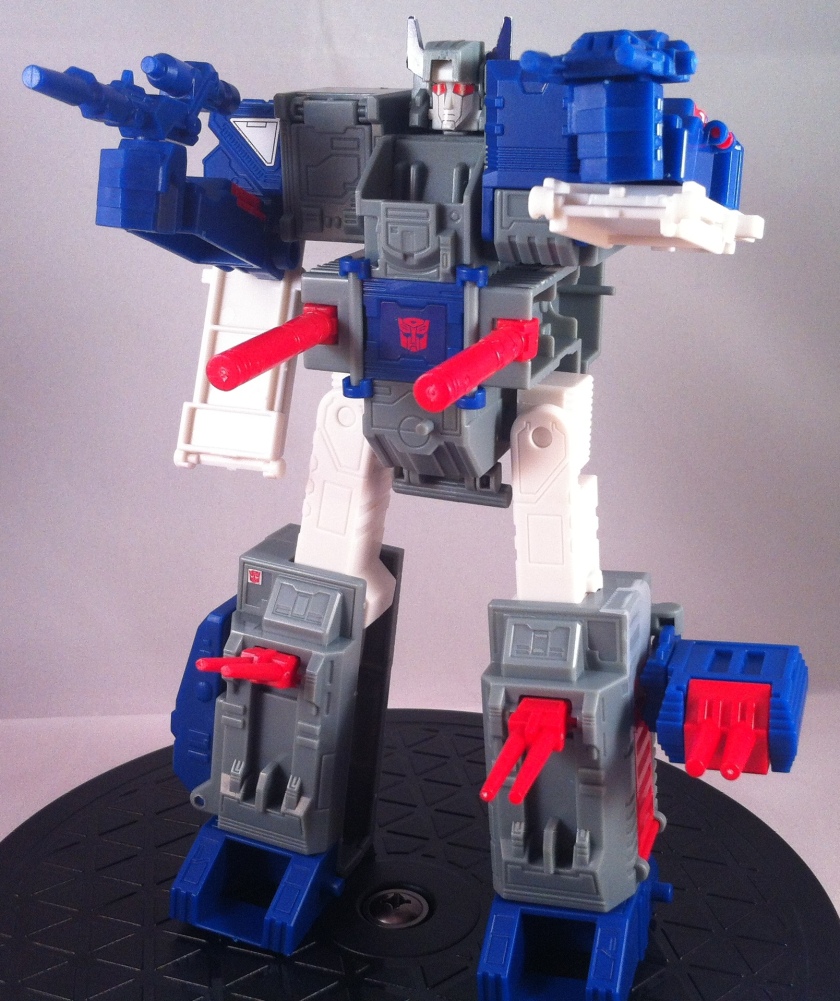 G1 Fort Max was, of course, a City Bot.  And yes, they absolutely made sure his alt-form City Mode was also G1 accurate:

Obviously certain gimmicks were removed, suck as the lock-away prison and the elevator.

As I said, he comes in three parts, basically the two legs and the torso section.  Each “tower” section comes with a “little guy”.  The legs come with a tiny Windcharger and Powerglide!  And the torso comes with Fort Max’s headmaster, Cerebros (who himself was headmaster with Spike Witwicky, but let’s be honest, that would have been TIIIIINY!)

So if you were in Japan, and were only getting each section seperately, you still get a little Transformer with each section, which is awesome.  Plus they all transform, even Cerebros, who transforms into the “main computer” module: 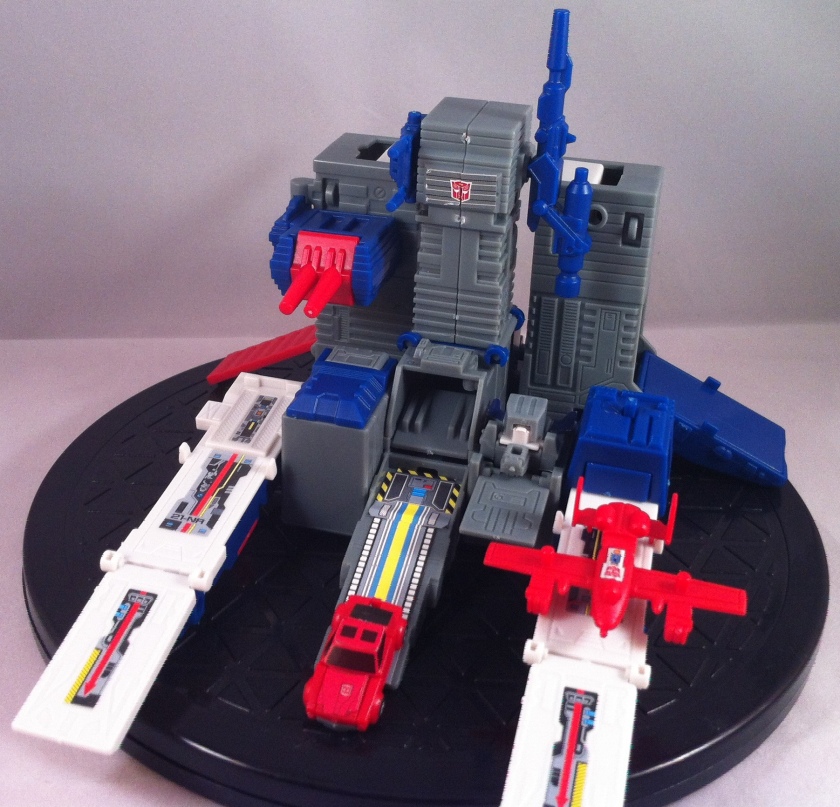 Cerebros plugs into the slot next to the Elevator.  The elevator exit that Windcharger is coming out of does feature a “power eject” gimmick as well.  Just an awesome feat of tiny-plastic engineering all around here.  Stickers of course, bring out the details, and what’s not pictured, and kind of breaks my heart to admit – He DOES in fact come with his Master Sword, but I’m afraid it looks like my wife might have accidentally thrown it away when she took out some garbage.  I had it in the box for safe keeping, and she mistook the box for garbage.  BAH!  Total backfire!

So there we have it.  Again, these guys aren’t really meant to blow anyone’s socks off, they’re just meant to be cheap little toys (well…except for Fort Max….).

If you have the means to find them (ebay, TFSource), they’re worth picking up just to check out.  Fortress Maximus is worth it, hands down, but he’s much more expensive, so he’s better left as a substitute for the Encore/G1 versions.

Coming up: It seems like everyone who wanted him got their Warbot Assaulter by now, and I know my Broadside’s looking at me while I type this, but first things first, I’m going to get that BotCon 2010 Set posted this week!