Here it is, the embodiment of my fandom in physical form.

Soundwave is as easily recognizable as Optimus Prime to anyone who grew up in the 80’s and for me, he is a iconic and loved character who to this day represents all that I loved about Transformer toys.  Today, Takara Tomy brings to us, after nearly a decade of waiting, Master Piece #13: Soundwave with Laserbeak (Condor)!

I love the head sculpt. I mean, I don’t know how you can’t.  Its so well done, and matches the cartoon so well. While I loved the G1 toy, the head sculpt, like most of the toys, were designed before the cartoon, so nothing really looked quite right.  Well, no longer!  Plus his eyes/visor are painted with a nice glossy red, so it looks reflective.  The angles are spot on as well, they give him a very angry/evil appearance, which is something you’d want in a Decepticon I suppose. 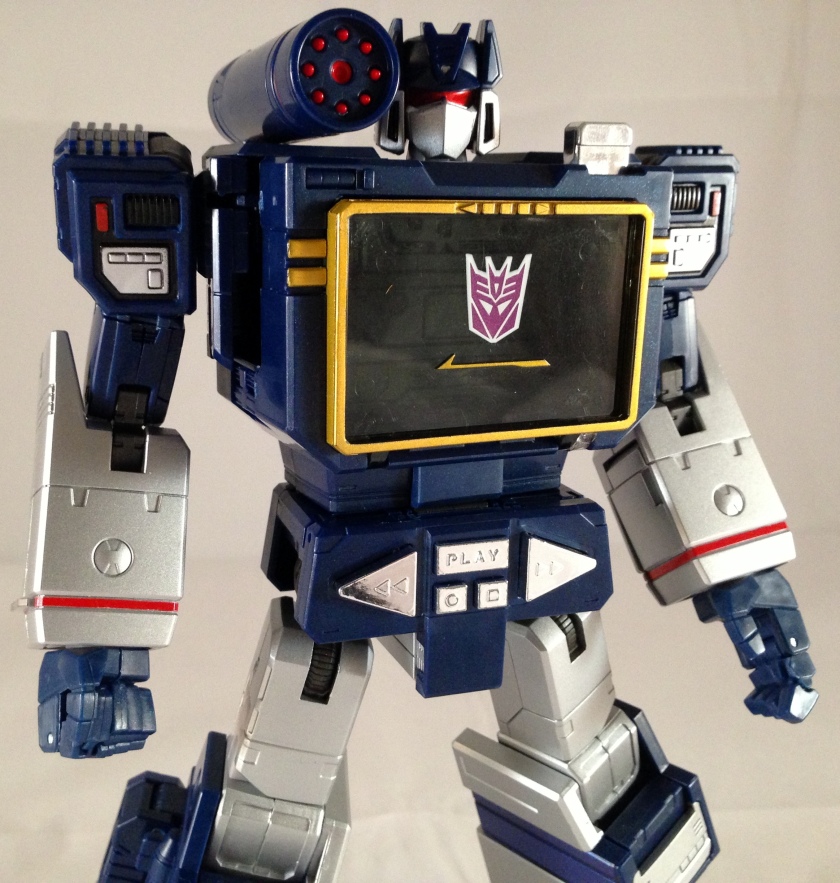 The paint aps and detailing are amazing.  From the iconic yellow around the tape deck to the red rockets inside his shoulder launcher, it makes him really stand out and shine.  I mean, let’s face it, Soundwave isn’t the most flashy character every designed.  Like his voice, his color scheme is very…flat.  But that’s why I love him.  I really like the detailed shoulders as well!

In back, we see more metallic detailing, which looks amazing on his back, as well as some detailed gears and piping molded into the plastic.  Notice that even the sections that stick out past the elbow have detailing in them.   Just very well done over all. 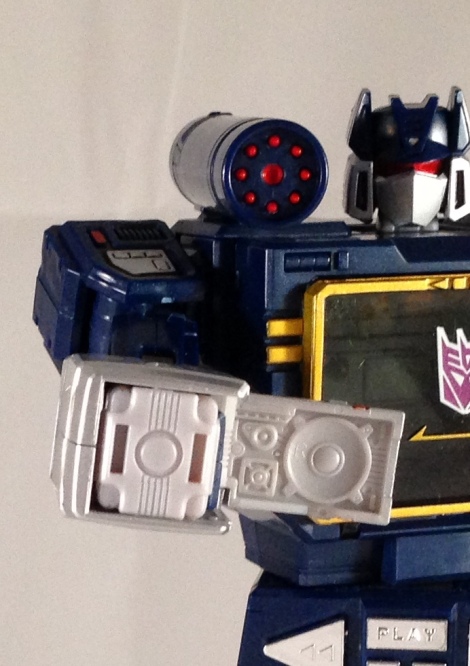 Even the forearm panels that open up for his fists have little speakers molded into them!  Speaking of the hands – they’ve very similar, if not identical to MP-1o Prime’s hands, where the forefinger is articulated, but the the others are connected. 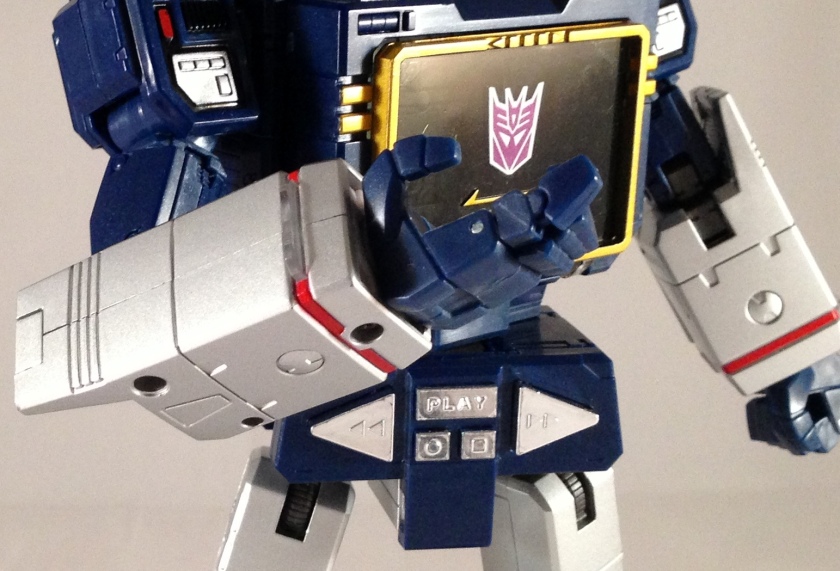 It gets the job done quite well.  And where as my Prime’s forefinger tip falls off all the time, Soundwave’s is nice and secure on there!

In terms of pose ability, he’s got it all – 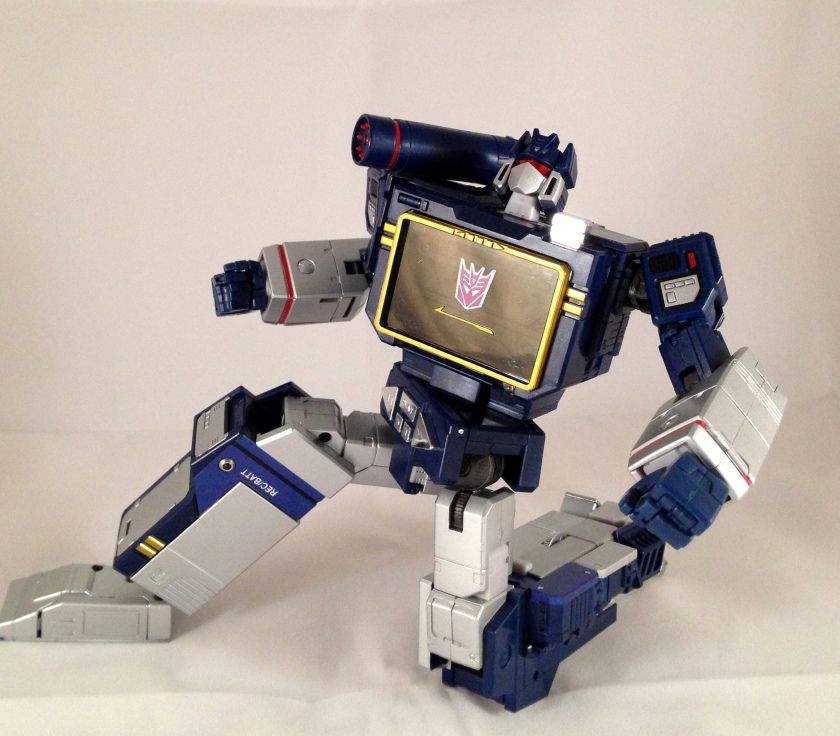 From a ball jointed head, to ankle rotation, hip swivel, rotating fists, he’s got everything a Master Piece should have!  The ratcheted thigh and hip joints are a VERY tight, which help hold any position you’d ever want him to hold.   Let’s get into the good stuff now –

Starting with his chest compartment, of course!

Naturally, he’s able to push his own eject button (which sounds dirty, but its not).  The chest door springs open just like the G1 toy’s did, and, in fact, it uses nearly the same mechanic (though 25 years of advancement makes it not break as soon as you push it).

Inside the compartment, we see:

A very well detailed inner panel.  But herein lies the first of many nice surprises!  Push the rear panel back, and it will lock far enough back to hold THREE cassettes!

That’s right folks: First it was one cassette, then the make the old G1 door bigger so he could hold TWO, and now they’ve engineered the entire compartment to hold up to THREE tapes.

Now, not to be confused with Fall of Cybertron Soundwave’s “plunger” gimmick, there’s no such thing with MP Soundwave. With three cassettes inside, you simply eject the first, the on the back,

Press that little tab on the battery compartment, which snaps the next tape into the eject position.  Repeat the process until the panel is back to it’s original state!

OH…and speaking of Tapes….it turns out Soundwave can hold G1 cassettes!  Yes, Masterpiece Laserbeak (who we’ll get to later!) is literally the same size and dimension of his G1 counterpart:

So if you want to just use your old G1 cassettes, they fit in perfectly! (though when we look at Laserbeak, you’ll see how much he blows them all out of the water, then blasts them, then chops them up and turns them to dust…..again, more on him later…) so I went ahead and popped MP Laserbeak, G1 Overkill and G1 Slugfest into the chest: 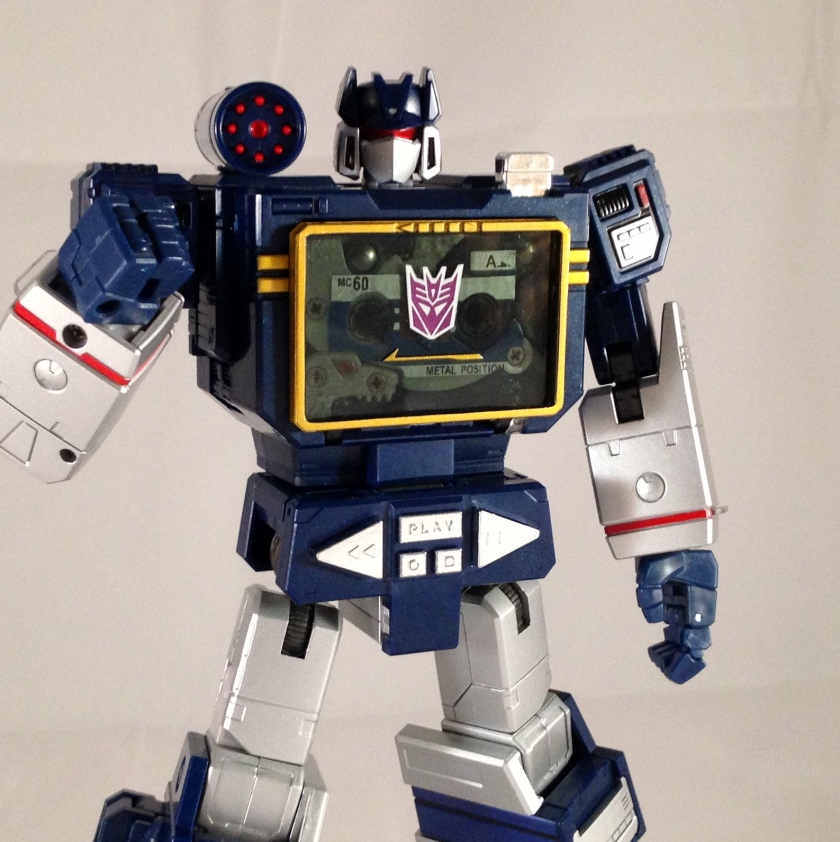 And of course, that allows you to do this:

Soundwave of course comes with his classic Concussion Rifle:

You’ll notice the barrel is an actual gun barrel, not just a solid piece of plastic.  It’s the minor details that make him a masterpiece!

He also comes with his…”sensor” device. It’s sort of an obscure tool that I think he used once or twice in the cartoon:

The cool thing is, like his concussion rifle, the sensor just pegs into his back –

I basically just leave it on there.  It can get in the way with transformation, but not too bad.  It might be better to just leave it in the box if you’re not all that interested in it as it’s better to keep it safe than loosing it.

Finally, and as yet ANOTHER nice surprise, he comes with Megatron in gun mode, but this time, designed not to crumble in your hands the moment you touch him: 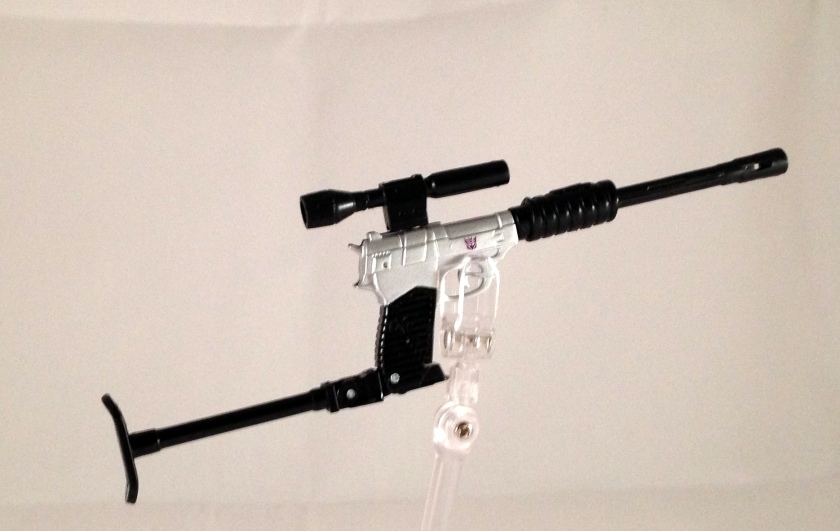 I must have missed it in the initial information because I had no idea he was coming with Megatron.  I gave him to Starscream though…seems more appropriate.

Transforming Soundwave is, to put it simply, a snap.  For the most part, he works roughly the same as his G1 counterpart, but with some obvious differences.

While he’s thick and blocky in this mode, the simplify and cartoon accuracy has me swooning all over again.  However, here lies the one complaint I have seen about this figure and that’s the back: 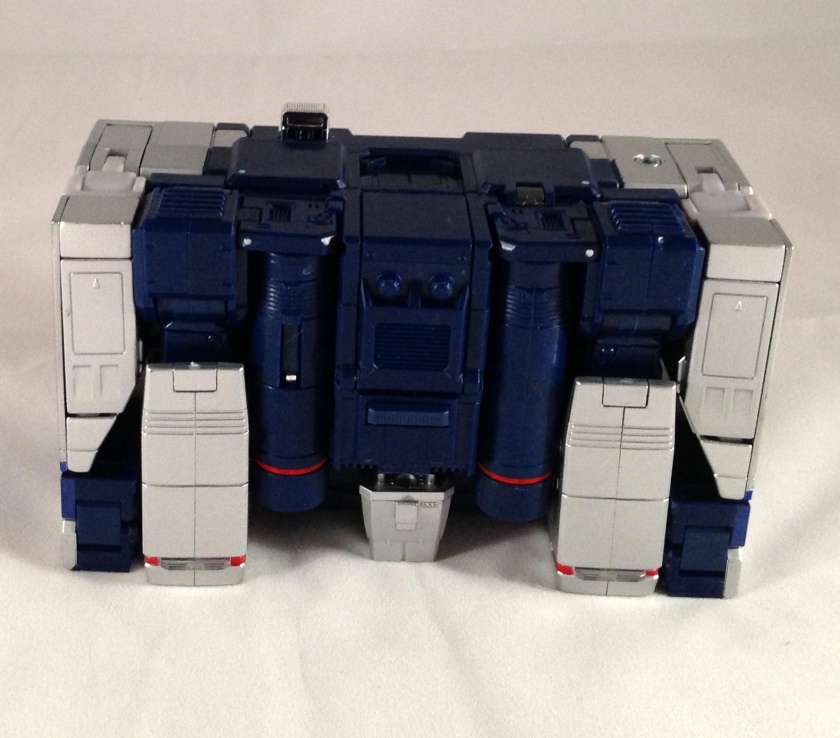 Unlike G1 Soundwave, due to the design of the figure, the back ends up looking a bit…open.  The weapons store vertically next to the arms, and without the little sensor weapon there, there’s just a big empty space.  I can understand why people aren’t thrilled with this, but honestly, how often is anyone going to go “OOOH, Soundwave, quick, transform him into a Walkman and show me his back!”, so I’m not too worried.

The ejection panel works the same in alt-mode as it does in Robot mode.  It kinda goes without saying I supposed, but rest assured, all three tapes fit in. 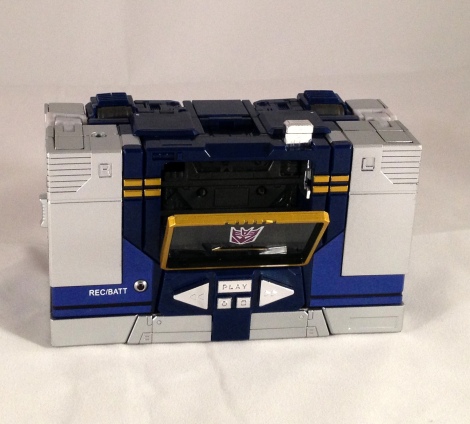 Don’t worry, we’re getting to Laserbeak, but first:

We need to take a look at just how beautiful his box is as well as some of the other “goodies” included with the figure:

The box is of course, the usual, beautiful black Master Piece box with a full color image of Soundwave in both modes and Laserbeak – or Condor, as he’s called in Japan. (For this post, I’ll just stick to Laserbeak.)

The back is a full layout of all the stuff you get inside: 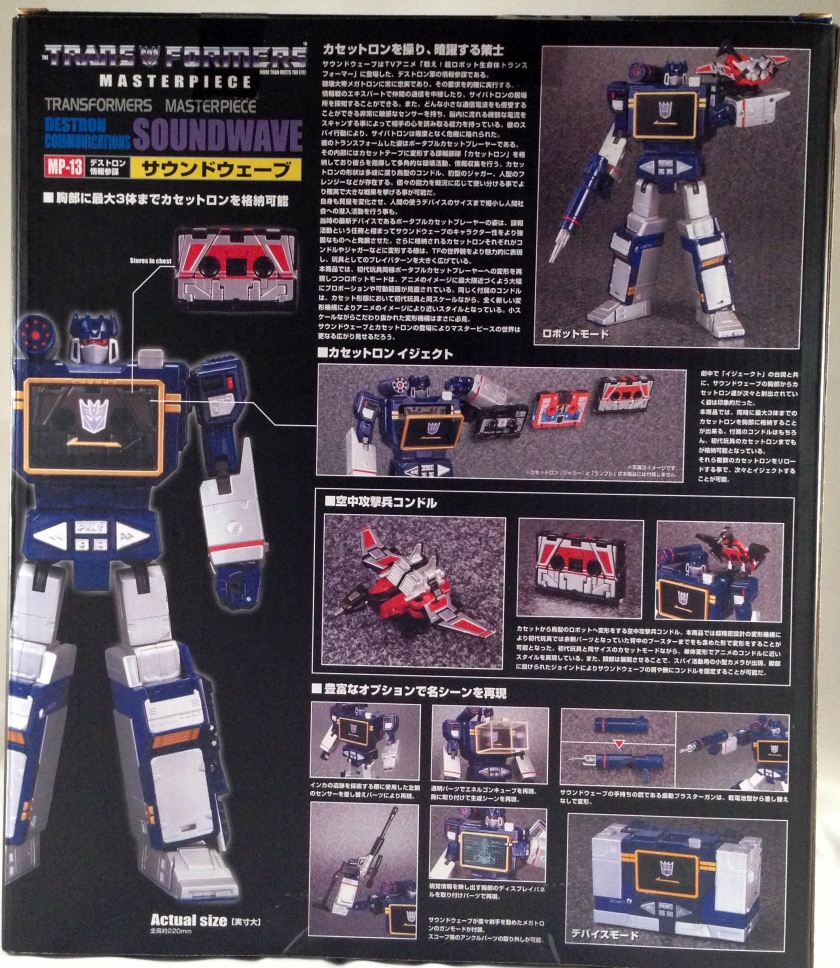 My Japanese allowed me to read everything that’s pretty much obvious with the pictures, but unfortunately I’m still too rusty to get the gist of the explanation. I’ll need my wife to work on that.

Inside, we get the usual plastic tray:

As well as the instructions and bio-cards. Wouldn’t be a Japanese Transformer without the bio cards!

I’ll just show off the front of Soundwave’s and the back of Laserbeaks’s   Very nice cards, but as with all the others I’ve collected, I just keep them in a little container (I should probably keep them in the box I suppose..)

Also, on the back of the instructions, we get the Chronology of Soundwave – which is awesome:

Now..the “display sheets”.  They’re used for his readout screen.  Just a quick tip, don’t actually cut them out of your instruction book, just take a photocopy in color and use that.   The readout screen is one of several accessories included with Soundwave:

Its just a blank grid panel that pegs snugly on over Soundwaves tape deck door.  You cut out the little display screens and place it behind the readout panel:

Then plug it into his chest: 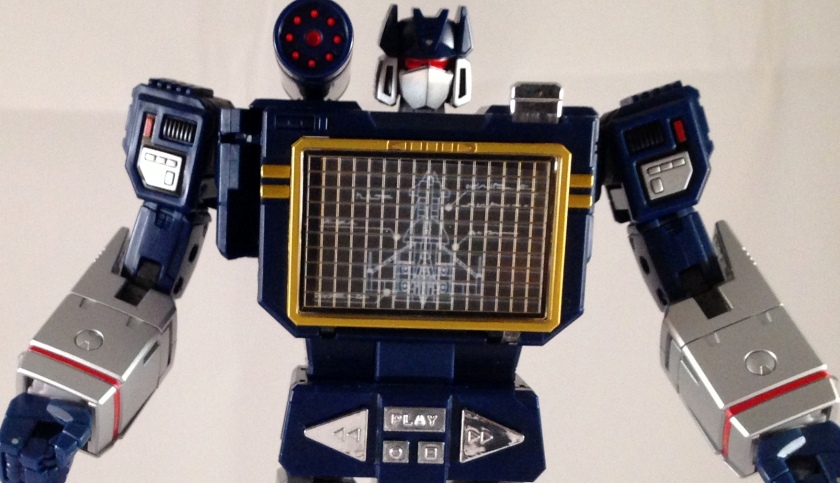 I do like this feature a lot.  I would like to see some addition images and hopefully the Takara Website will have some up, otherewise I suppose you could just photoshop your own.  I’d like to do the “weak spot” analysis that the Encore and Reissue tapes featured.

Also included is one energon cube container.  This seems to be a bit of a dud with a lot of people, as it’s just a clear cube:

Just to clarify, Soundwave doesn’t actually produce Energon cubes, he just produces the containers.  If he could produce energon cubes, then….why bother fighting? Just have Soundwave churn out a bunch of them.  The empty container plugs nicely into his chest like so:

While I wouldn’t mind the cube being molded in pink plastic, I can understand why it’s clear for accuracy.   I want to hope that the Amazon exclusive “extra” energon cubes will be pink…but I doubt they will be.

And finally, his last “accessory” is none other than Master Piece Laserbeak (Condor as he’s called in Japan, but for this review, I’ll stick to Laserbeak).   He is, to me, worth the price of this figure alone.  I posted here about my love of the Cassettes, and Laserbeak is the epitome of what I love about them, a complex, well designed little figure that transforms into the simplest of accessories:

Hmm..however..his cassette case is Pink?  Um…..why didn’t they energon cube come in pink and the case come in clear?   Well, let’s not tug at those strings.

OH my god is Laserbeak perfect.

Aside from being a complete spitting image of his cartoon appearance, he’s still the same size and dimensions of his G1 counterpart.  His head sculpt couldn’t be better:

Yellow eyes, metallic beak, even the intake/scruff near his neck is perfect.  But we haven’t even scratched the surface.  First of all, he’s poseable.

You can have him perched like this with his wings folded, his legs, while straight here, rotate outward so you can have them splayed out a bit.  Oh and he has his little spy-cameral built into his head too!

Under his legs he has slots that allow you to peg him into Soundwave’s shoulder:

Very securely so he won’t budge even if you shake Soundwave – but there’s a tab on Soundwave’s forearm as well so you can have Laserbeak perched there too! 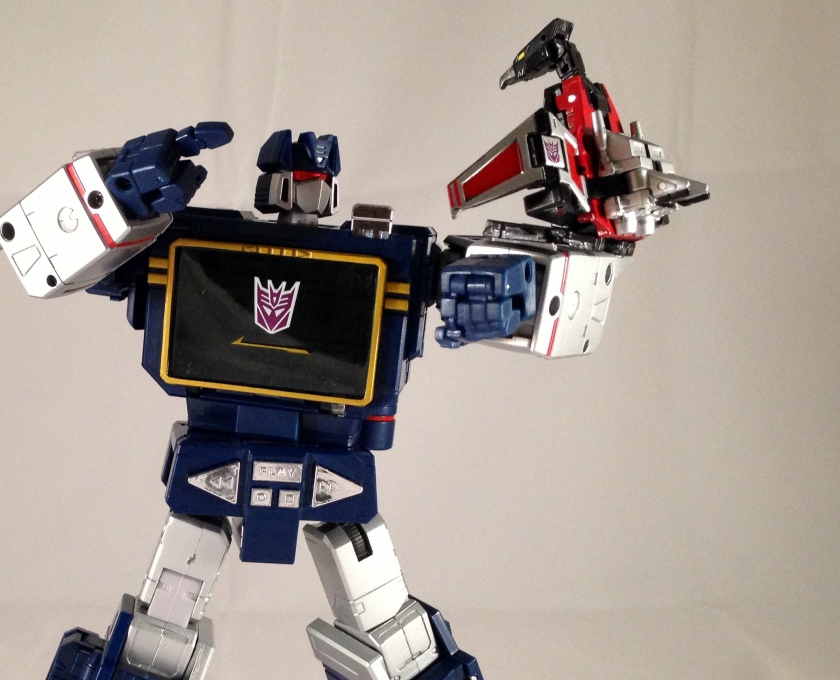 I mean…C’MON!  How awesome is that!!  (*ahem*…Future Megatron better have this tab as well….)

Laserbeak folds up into a perfect tape.  HOWEVER – Peaugh points out in his video review (here) That it works best to fold his wings forward first, then tuck the wing tips in, THEN PRESS DOWN on the Decepticon logos to snap them securely in place, otherwise the wings might wiggle around a bit in tape mode (BIG THANKS TO PEAUGH!!!!) 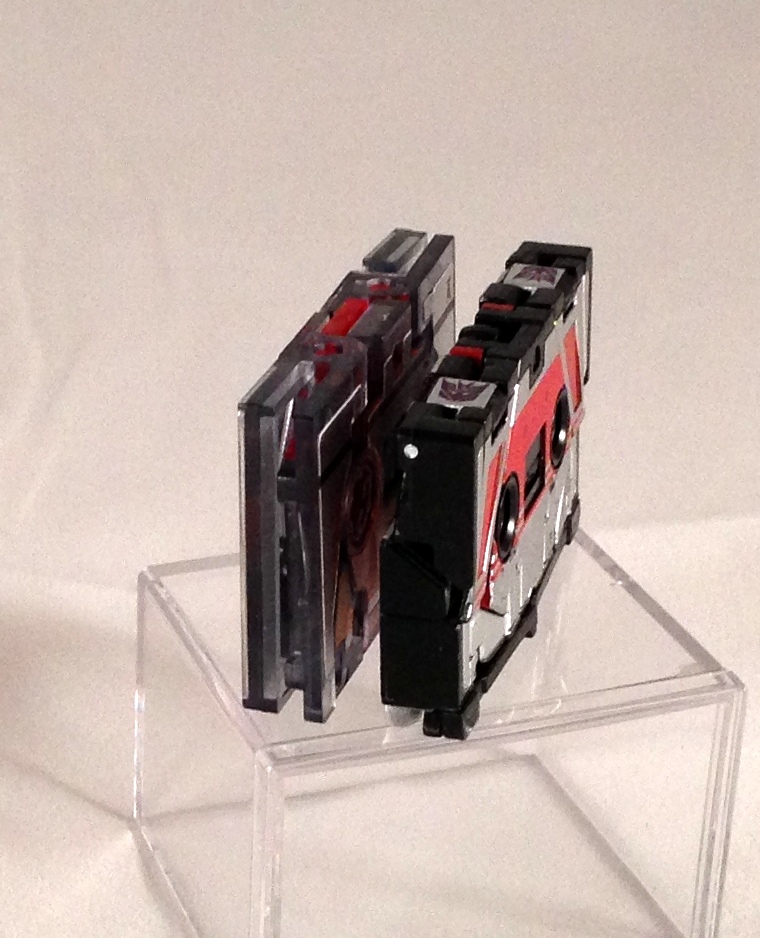 Like I said, he’s exactly the same size s G1.  The other MP Tapes will be too so that’s awesome. 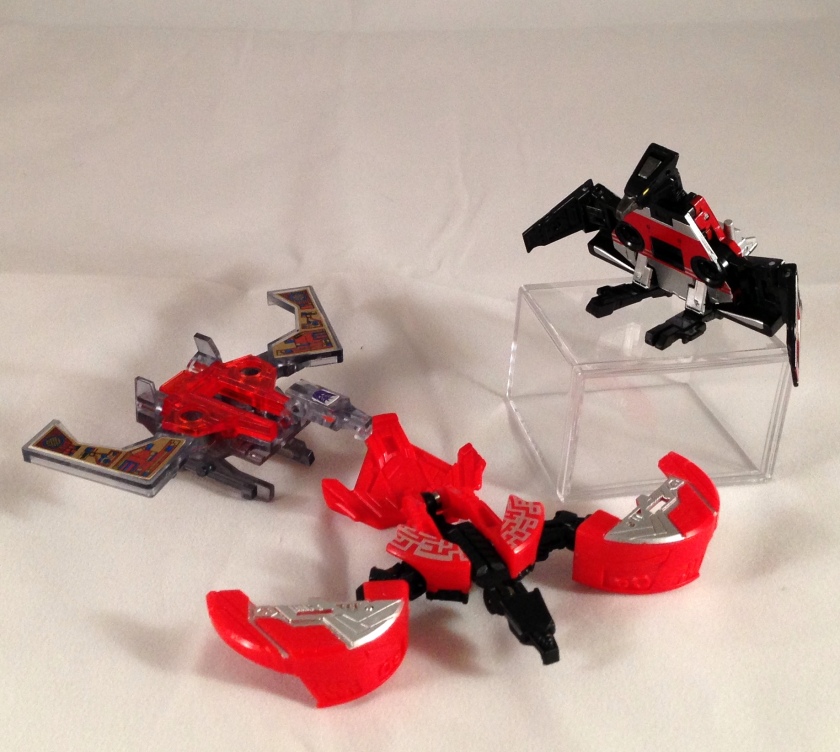 And here he is with some other Laserbeaks.  I kinda regret having G1 (Clear version) so close to FOC..looks goofy.  But yeah…I’ll take MP any day, even thought I still love FOC and G1.