We’re going to take a real quick look at the Takara version of Generations Springer as well as the excellent Dr. Wu set of Last Stand of the Wreckers guns.

The only difference between the Takara and Hasbro Springers is the color scheme. While Hasbro uses more vibrant yellow and green as well as large sections of gunmetal grey,as you can see the Takara version uses a much more muted Green and Yellow and a uniform slightly metallic grey.

I wanted to show off vehicle modes first as they’re the most noticeable with the differences:

The only downside to Takara is you can see a MAJOR difference in the yellow paint used on the hood section:

Unfortunate, but not the end of the world I suppose.

In robot mode, I like the Takara scheme just a bit better, mainly because of the muted tones and uniform grey.  Seems he’s based on Last Stand of the Wreckers, he looks a bit more color-accurate.

So over all, Takara Springer is very nice, but at the price range, he’s only for major Springer fans as the Hasbro version is far more affordable and just as nice looking.   Either way, you’ll want to make sure to pick up the Dr. Wu Rainstorm set:

Giving Springer (or Sandstorm!) more accurate weapons only serves to put this figure even further up the “awesome” scale and they are as comic-accurate as you could possibly get:

And because they’re both black,they work for either version. 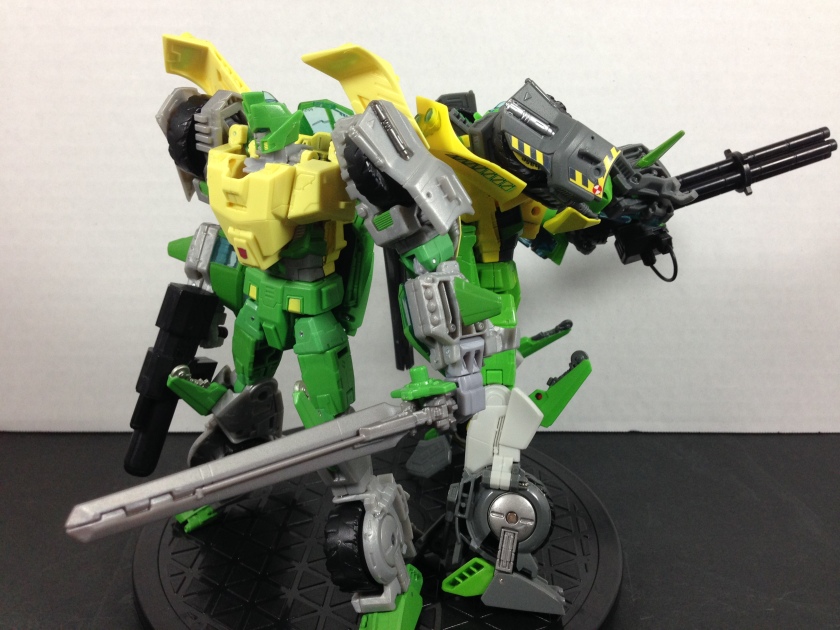 So this is absolutely wroth checking out, whether you want to pop for Takara Springer or not, you’ll get plenty of use out of these two guns.

Stay tuned for more, we have a lot coming up!  Also don’t forget to check out the Podcast!