Man do I love these box sets.  The Combiner Wars sets were great because we got G2 stuff or teams that weren’t released in retail (LioKaiser), and with Titans Return we’re getting really neat “theme” sets.  Here is the very last of the four (Including Arcee and Grotusqe) – Siege on Cybertron, the “Strength” set. 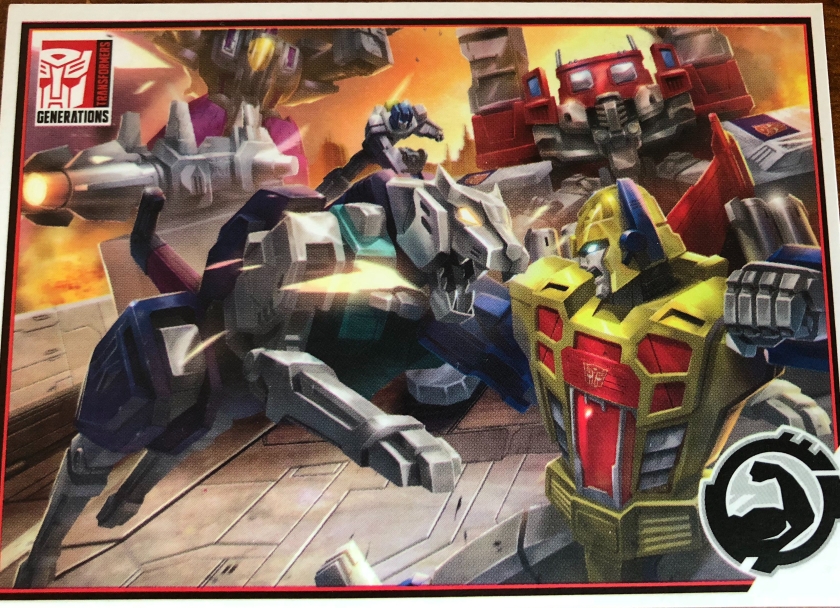 Like the first box set, Chaos on Velocitron, included in the box is one of each scale toy: Leader Class “Magnus Prime” (Essentially Super Ginrai), Voyager Class Tidal Wave, Deluxe Class Metal Hawk, Legends Class Pounce and Titan Master Thunderwing.  It’s really a great assortment of figures and I’m quite happy with the whole thing.  So let’s take a look at each toy individually. 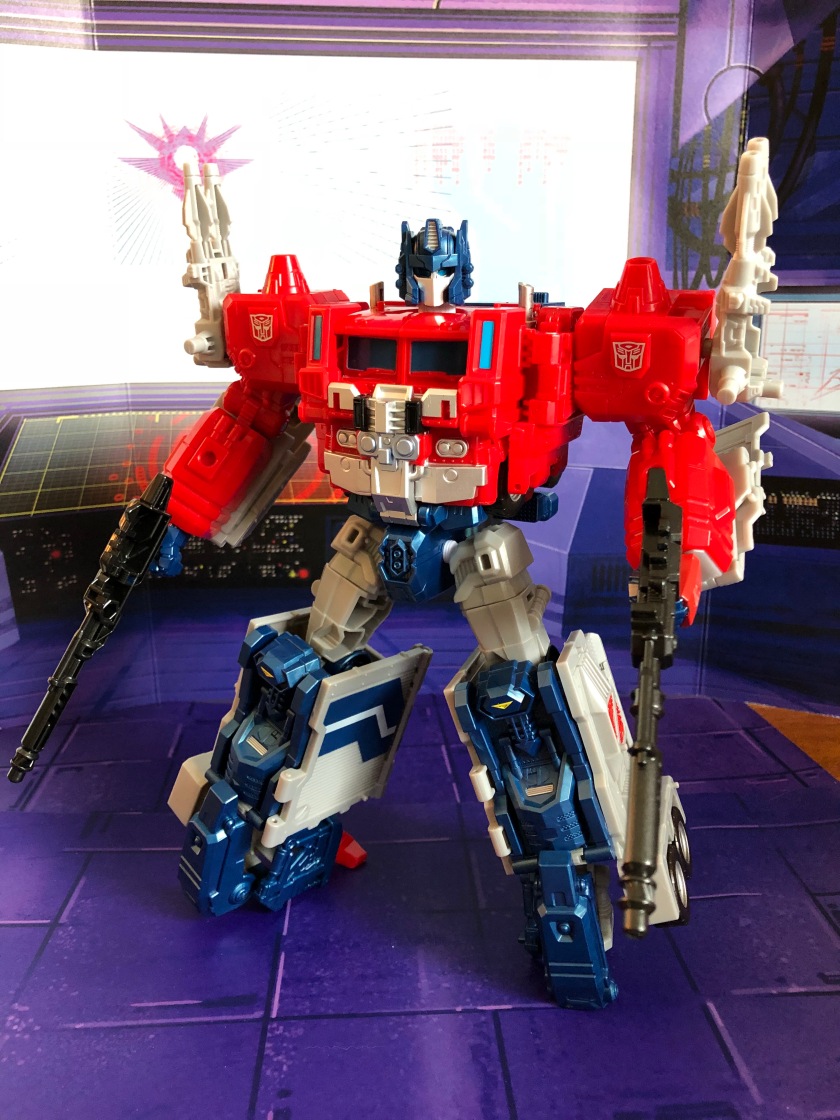 While Hasbro brought us Power Master Optimus Prime in wave one, Takara Tomy sort of upped the ante by redesigning the toy a bit and branding him Super Ginrai from Super God Master Force.  This was undoubtedly because they were in the process of designing the God Bomber toy so God Ginrai was possible.   Well we now have a Hasbro version of the toy.  My suspicion, given the name, was that it was intended to be something different, but budget contraints likely led to just issuing the Takara toy, with some very minor paint/plastic changes. Oddly enough, the Titan Master for Magnus Prime’s name IS Ginrai, so obviously Hasbro intended the character to be present in the Titans Return Universe, which is neat. Naturally the big question is whether Magnus Prime is compatible with GodBomber.  He is. 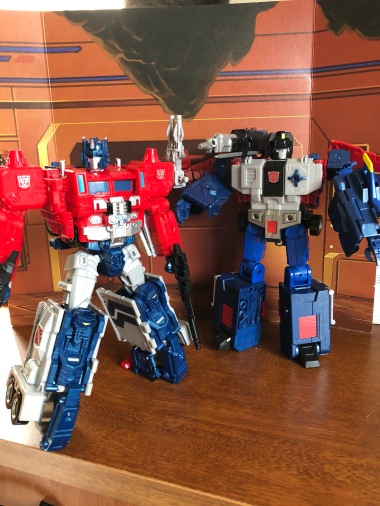 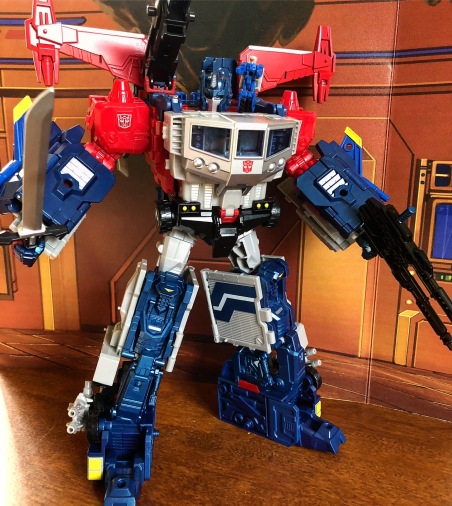 Admittedly, the connections feel a little less secure than Takara’s Ginrai, but it’s still fully functional and stable, so YAY! 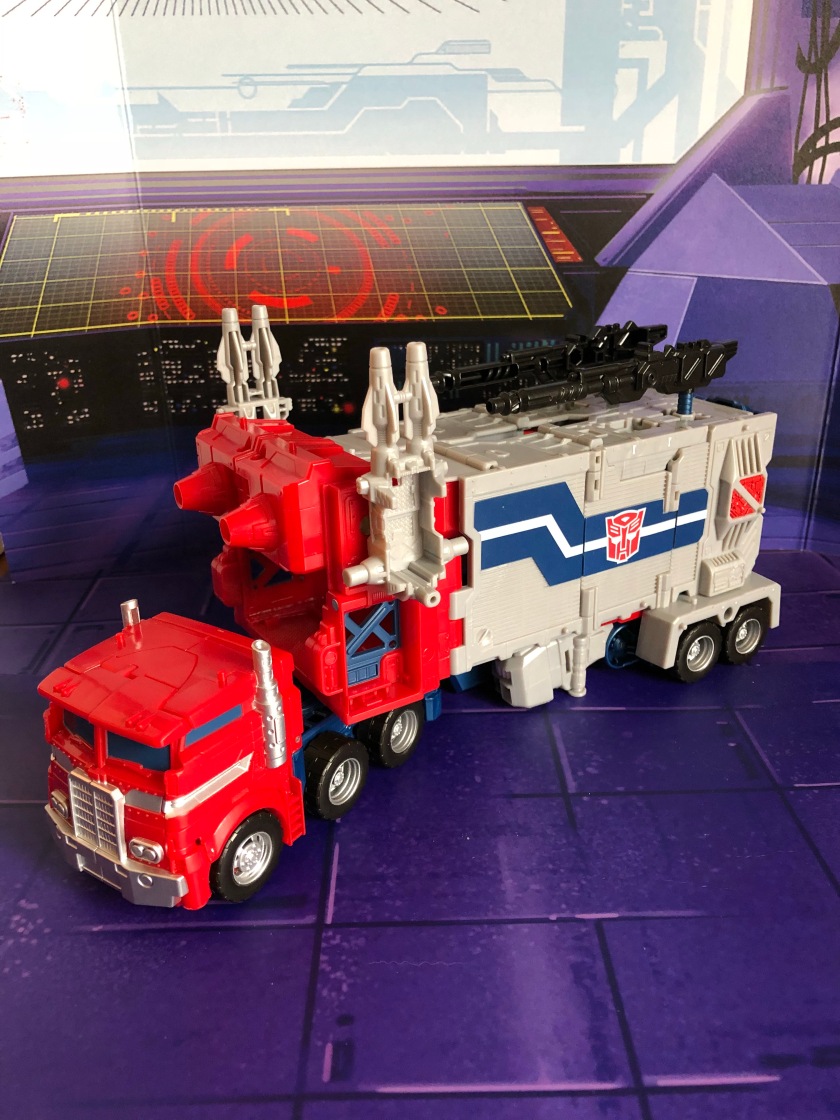 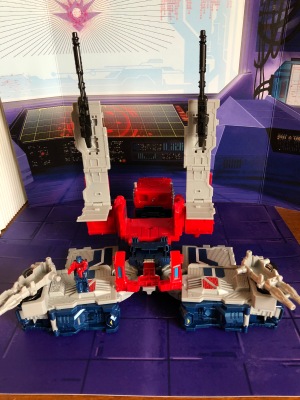 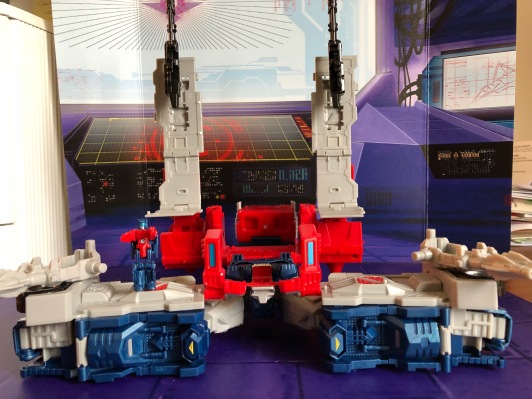 Base mode is essentially the same as Power Master Prime with a few differences, mainly the longer arm/towers and central hub section.  Still, it’s a fun base mode and it’s used in the box art, so that’s a plus.  Over all, Magnus Prime is kind of the vanilla of the set, he’s nothing super special unless you have the Godbomber set, but it’s nice that people have access to the toy for sure.

The odd duck out, I guess, is Tidal Wave, with his Titan Master, Fathom.  A straight repaint of BroadSide, with a new face sculpt on the Titan Master, Tidal Wave represents the powerhouse of the Deception team in the set. 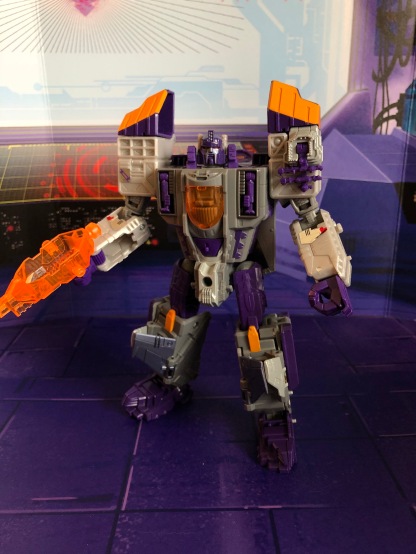 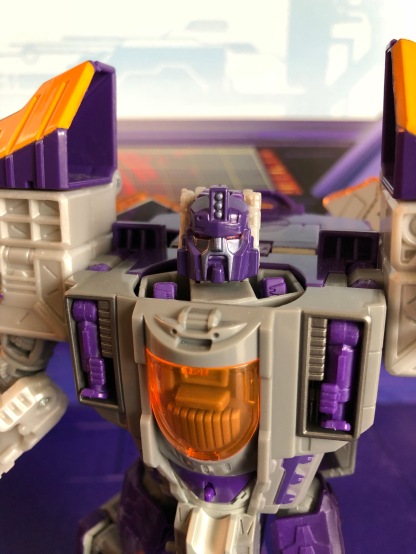 Tidal Wave hails from the Unicron Trilogy and so, sort of stands out seems everyone else in this set (and the toy line really) hail from the G1/Japanese Continuity.  Still, he DID show up in the IDW Sins of the Wreckers (as a Blue Whale), so I guess he’s found two solid footholds in the G1 Universe.  That’s fine by me, I like this mold, and I keep the shoulder sections upright in robot mode so he’s somewhat different looking than Broadside.  Also his face sculpt is awesome, with his frumpy frown-stache and red eyes, he looks very nice.  Also that Orange and Purple pop really well. 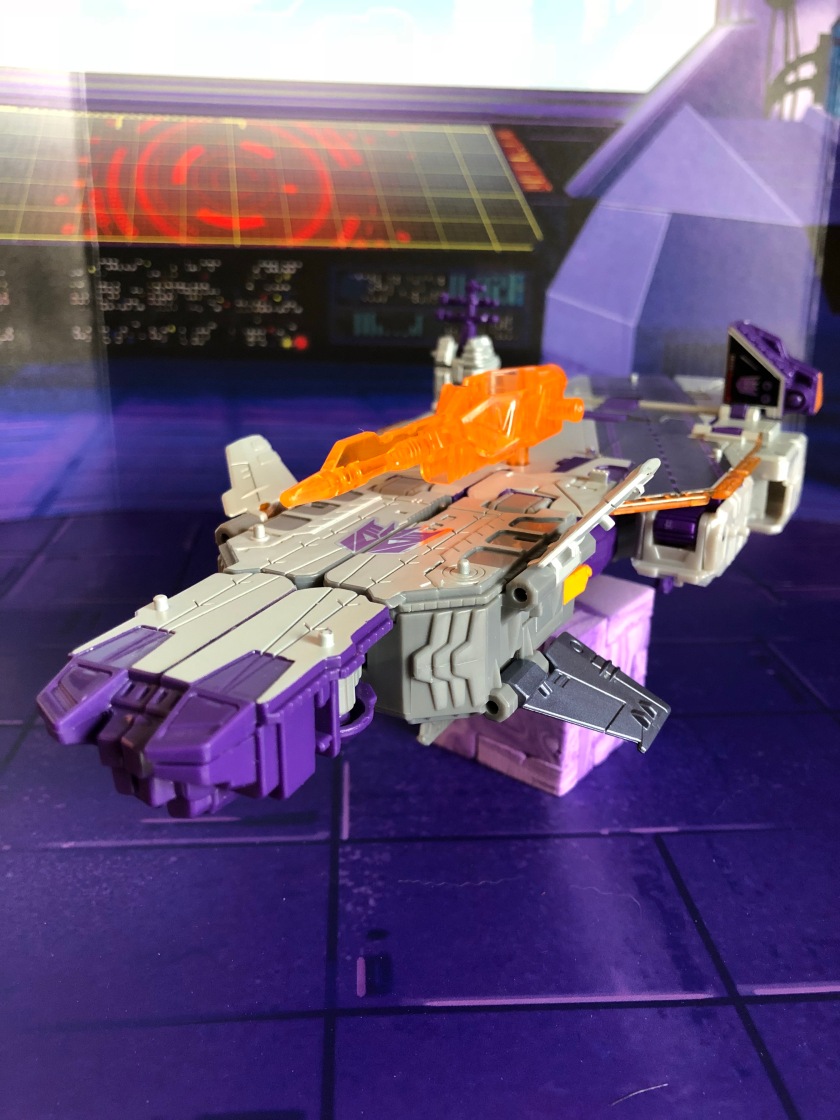 I also flip out the fins and rotate the rear shoulder panel up in Carrier mode as well to further distinguish him from his mold-mate. I feel like this gives him more of a Deception war-ship look. 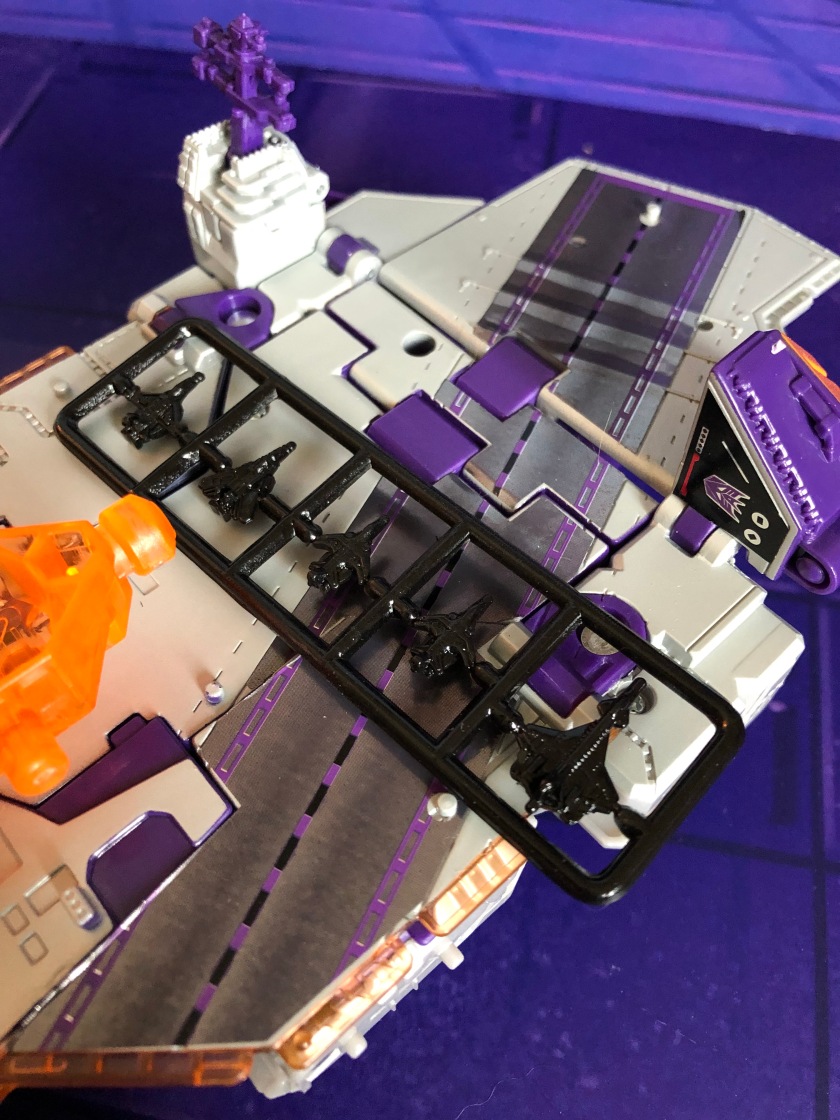 The tiny Aerialbots are also included again (this time in black) in case you’re wondering. 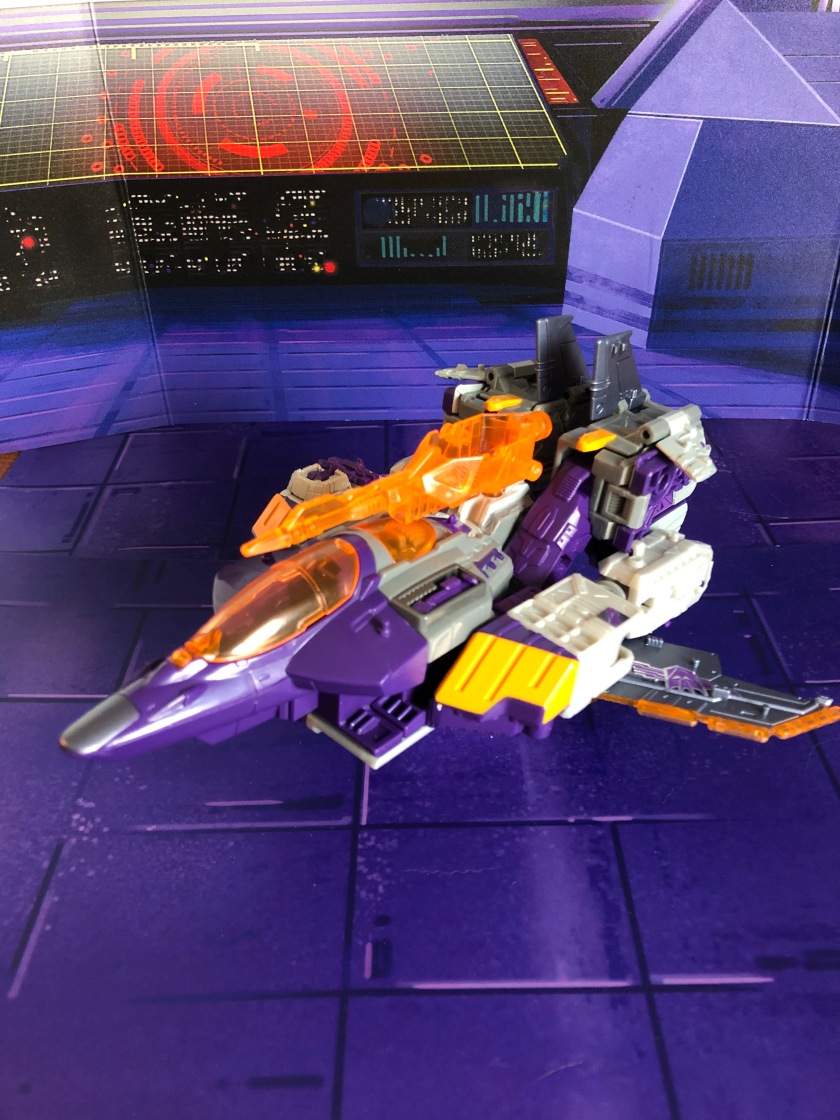 Also jet mode.  Meh. (Though I don’t hate it as much as most people).

I was super excited to see Metal Hawk included in this set.  While he played a somewhat annoying role in IDW’s comics (and looked like a wire frame version of himself), Metal Hawk or Hawk, played a BIG role in Master Force, so again we’re getting a Japanese Continuity character in this set, and he uses the Triggerhappy mold which is easily one of the best, if not THE best mold from this line. 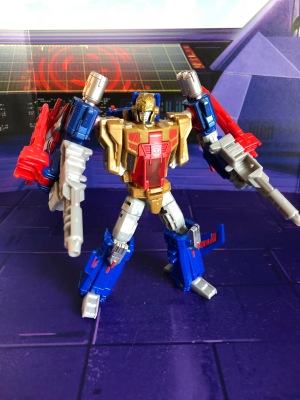 Oh, and he looks incredible.  The head sculpt is spot on and really captures his cartoon likeness.  The gold, blue and red are just a great combination of colors as well.  He’s awesome.  My only minor, VERY minor “complaint” is I would have preferred a sword for him, but obviously if you’re making the mold, that includes the making the mold’s gun so there’s not much that can be done. 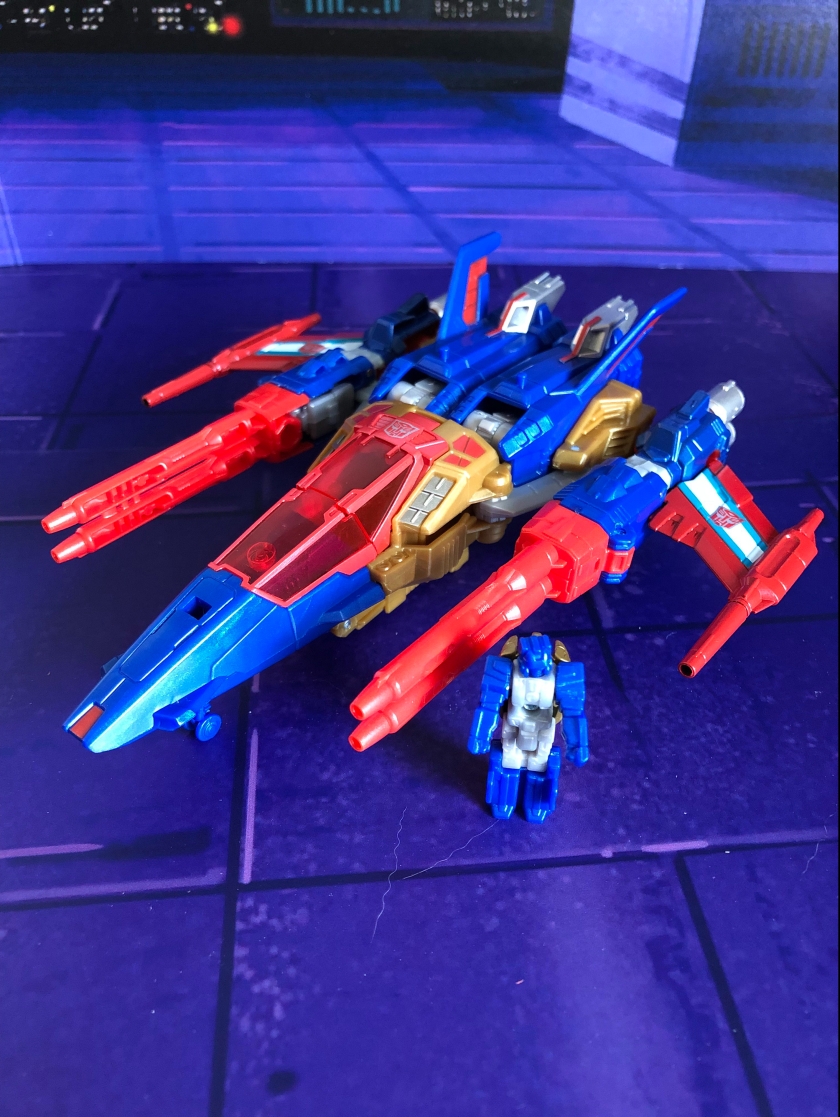 Easily the toy I was MOST excited about here is Pounce.  I love, LOVE the Clones.  While they barely make an appearance in the G1 cartoon’s “Rebirth” Story Arc, they show up quite a bit more in Japan’s The Headmasters.  Also I coveted the toys as a kid, they’re some of my favorite G1 toys.  In Chaos on Velocitron, we got Fastlane, so getting Pounce in this set makes me giddy! 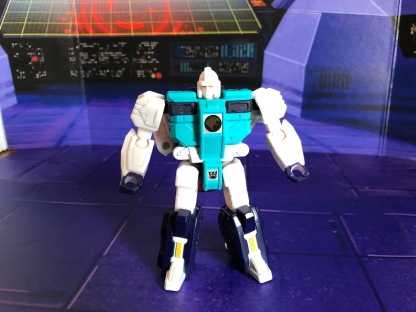 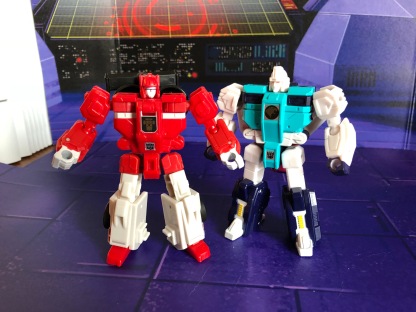 He really looks fantastic and these little Legends guys have really neat designs lately, so over all, I’m just thrilled here.  I’ll get more into the four of them when I review the two-pack of Cloudraker and Wingspan, but needless to say, he’s my favorite part of this set. 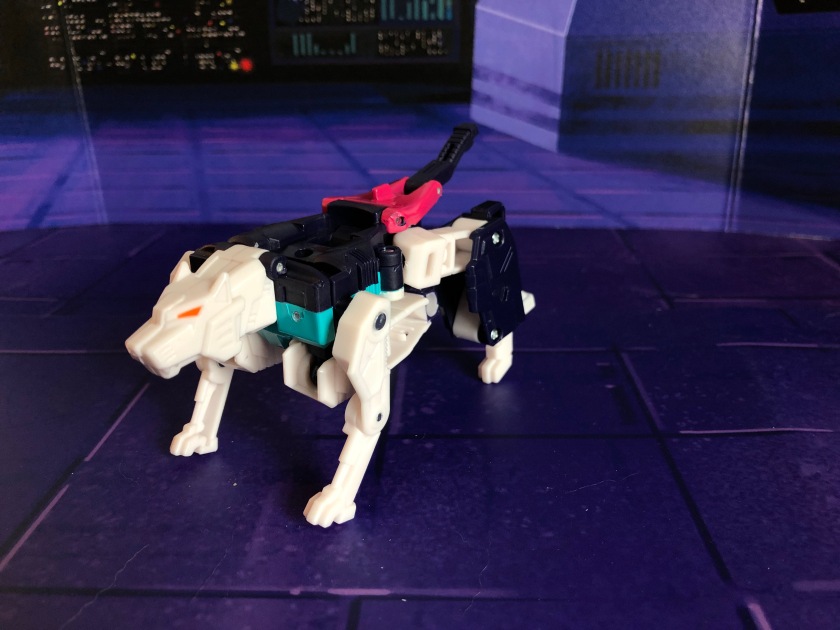 I mean, I love robots and I love cats, so Pounce fits that quota perfectly.   His Puma Mode looks great, and works very similar to his G1 Toy.   He features a Titan Master tab on top as well so any of the little dudes can ride him into battle.

Another neat little thing to note, he has a display stand peg hole under his tail, so you can mount him in mid-..er..Pounce, if you so choose! 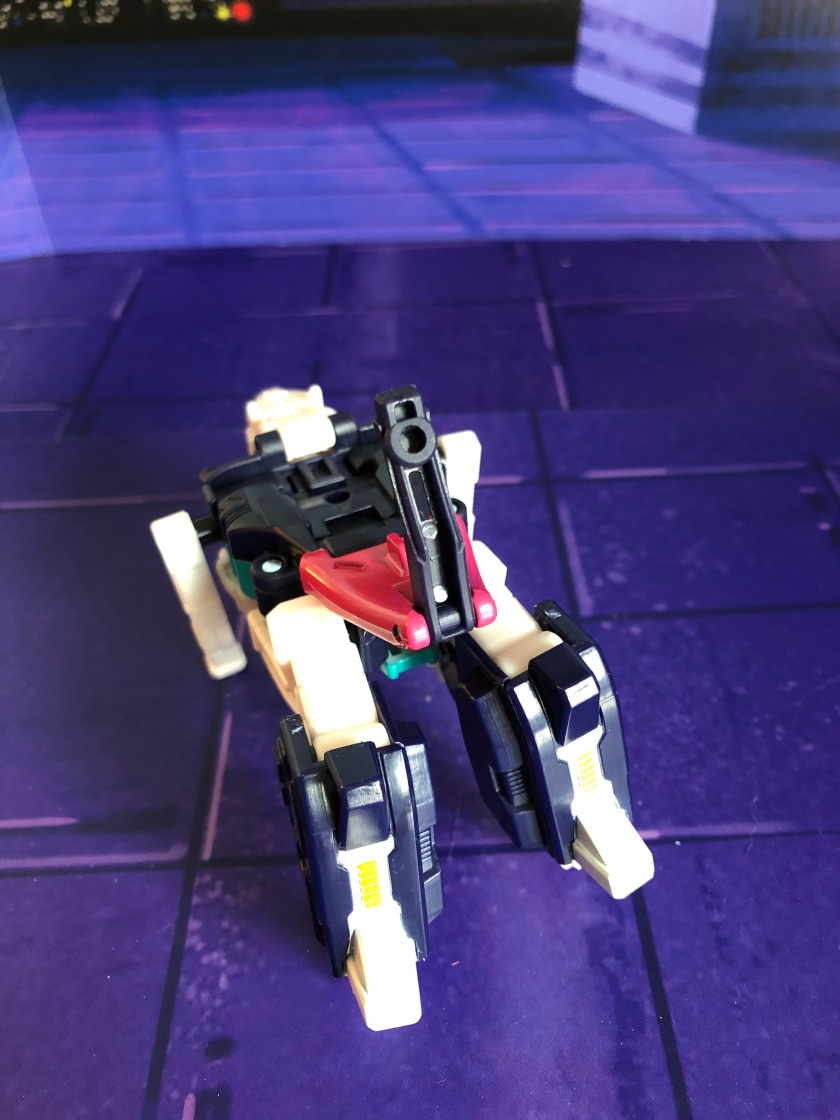 There isn’t much to these tiny Titan Masters, but with this set we get the second of four “SUPER” Titan Master figures.  Stand alone, powerful characters with die-cast metal used for the face sculpts.  We’ve seen Rodimus Prime, Ultra Magnus, Scorponok, and now we have Thundewing. 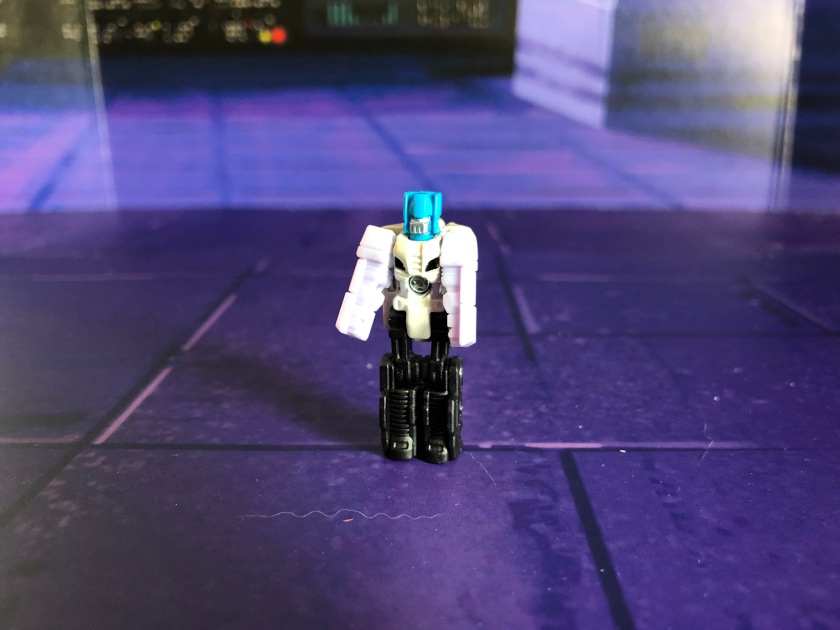 His paint apps are very well done, nice and clean, highlighting the detail without globbing them up.  I do love that little head sculpt too.  His colors are great, and mimic the G1 Toy’s scheme. 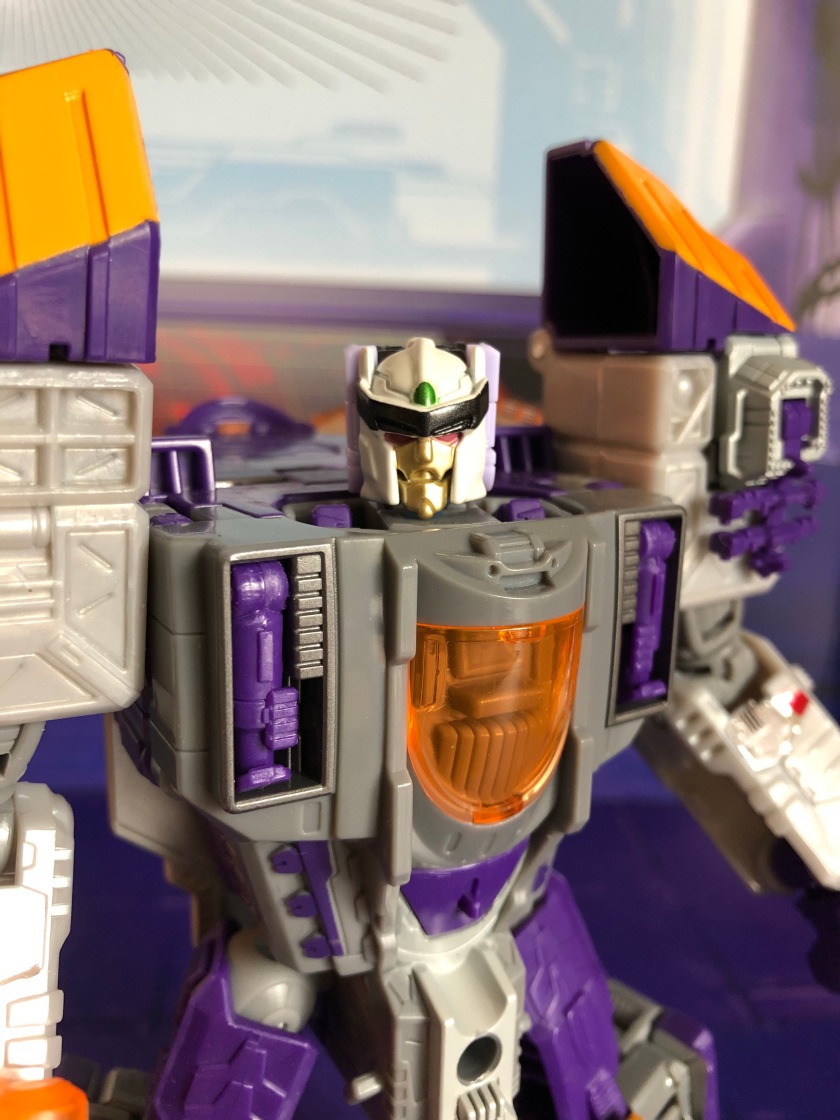 The face sculpt is amazing.  He looks great on Tidal Wave’s body.  The paint apps are precise and while Thunderwing probably deserves a leader class toy at some point, this is a cool way to get a toy out of him for now.

Would I recommend this set? Yes, though it may be tough to track down.  I think the only retail store carrying it is Toys R Us which are becoming scarce.  You can get it online however, and that’s probably your best bet. 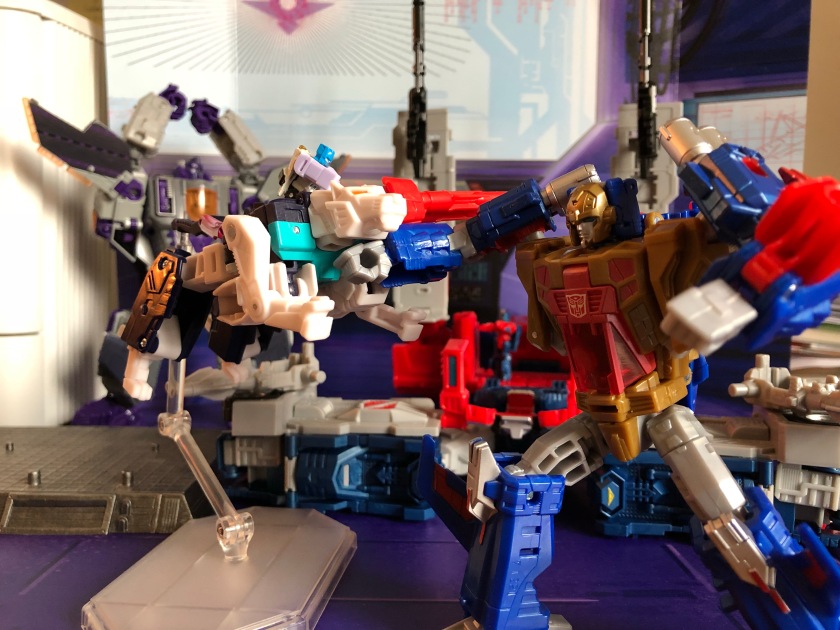