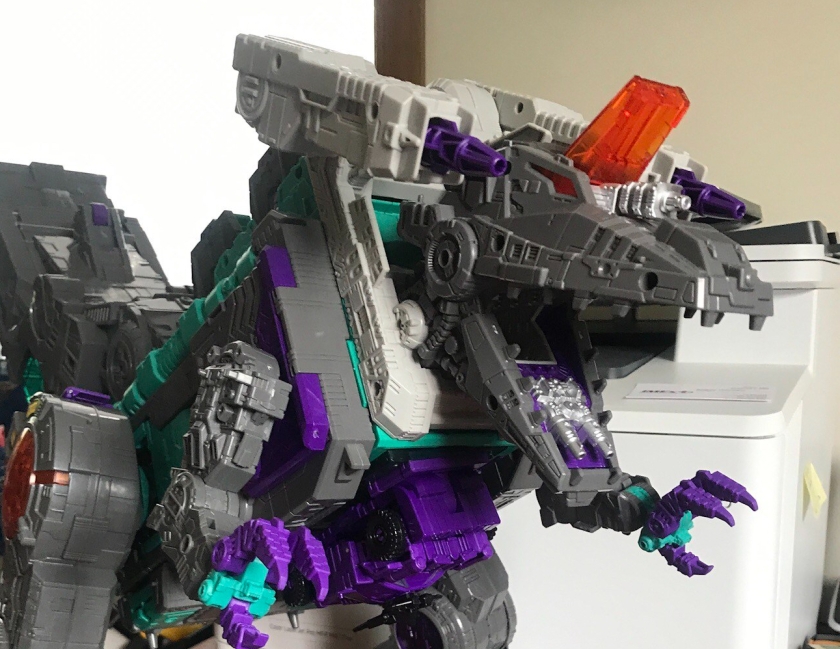 Sorry for the lack of posts, I had a crazy week last week with some small medical stuff and got behind on everything.  Let’s FINALLY take a look at Trypticon! 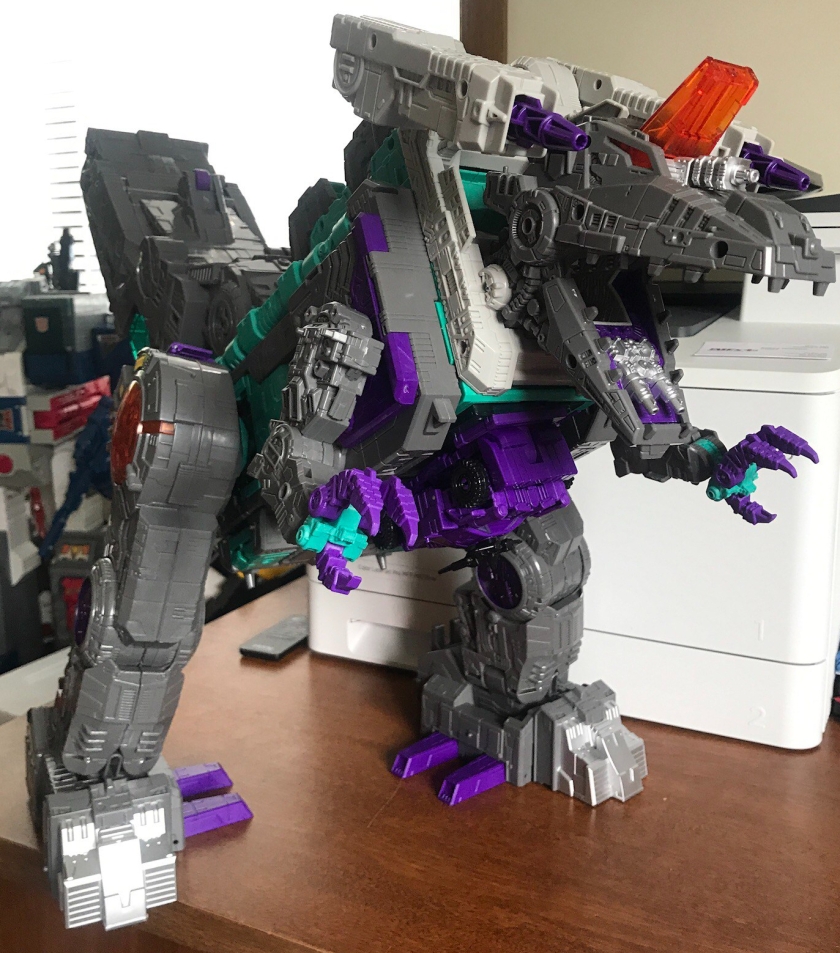 Okay, so here’s the the thing with these Titan figures,  I have NO space to take proper pictures.  I mean, I do, but I work from my home office and I don’t really want to move all my work stuff to take toy pictures.  It’s a project.  Also, I have this horrible habit of TOTALLY over-thinking these reviews.  So this post will purposely have only a select few pictures.  I took A LOT of them.  You don’t have time for that, so I won’t bother. 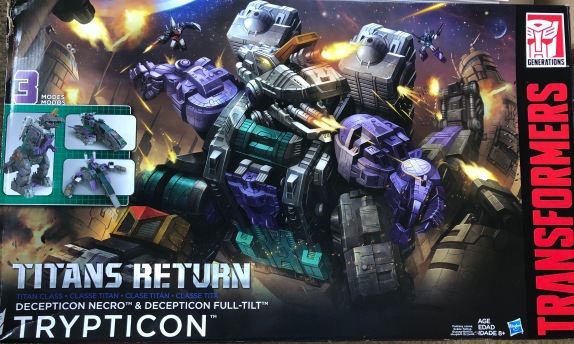 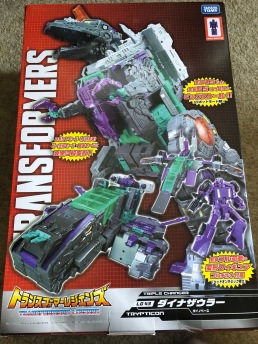 So I bought both versions of the toy.  I usually do this, as I’ve stated before.  Typically there’s good reason to.  Hasbro continues to use paint schemes and head sculpts that are based either on the G1 toy colors or IDW comic look (I.e. Triggerhappy and Chromedome), whereas Takara has been pretty adamant about sticking to the strict G1 Cartoon appearances, most notable would be Unite Warriors Bruticus and the main Headmasters.  For some reason however, Hasbro and Takara high-fived each other and kept both toys the same.  I mean, EXACTLY the same.  I-dentical. 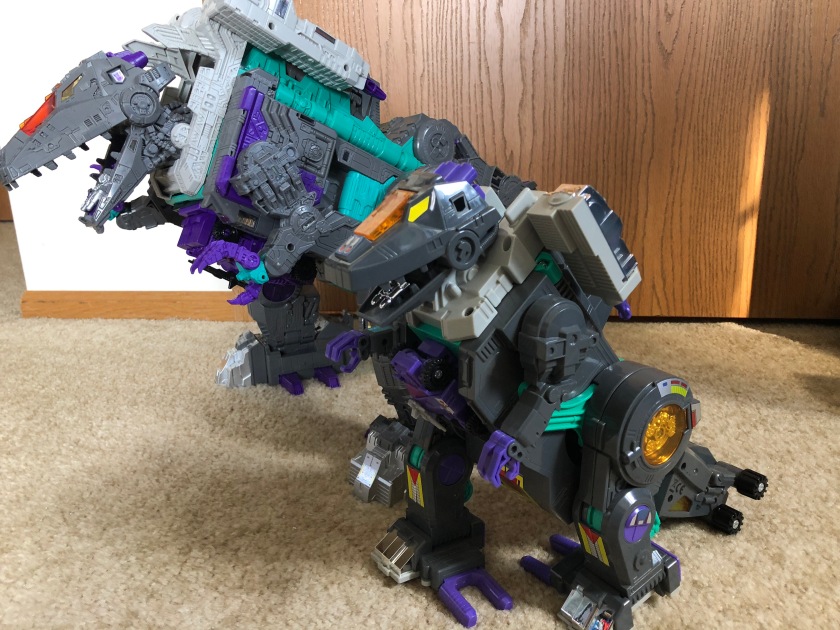 Ol’ Trypper McGee here is essentially an improved, bigger, more detailed version of his original G1 Toy, and that’s a good thing.  While he no longer has electronics, he features a lot of fun gimmicks that really make him a joy to play around with and easily the best of the Titan Class toys so far.

The ‘prominent’ feature added to Tryps is the ability to gobble up Titan Masters, he’s designed with an esophagus that allows the tiny dudes to travel down his pie hole into his upper chest compartment. 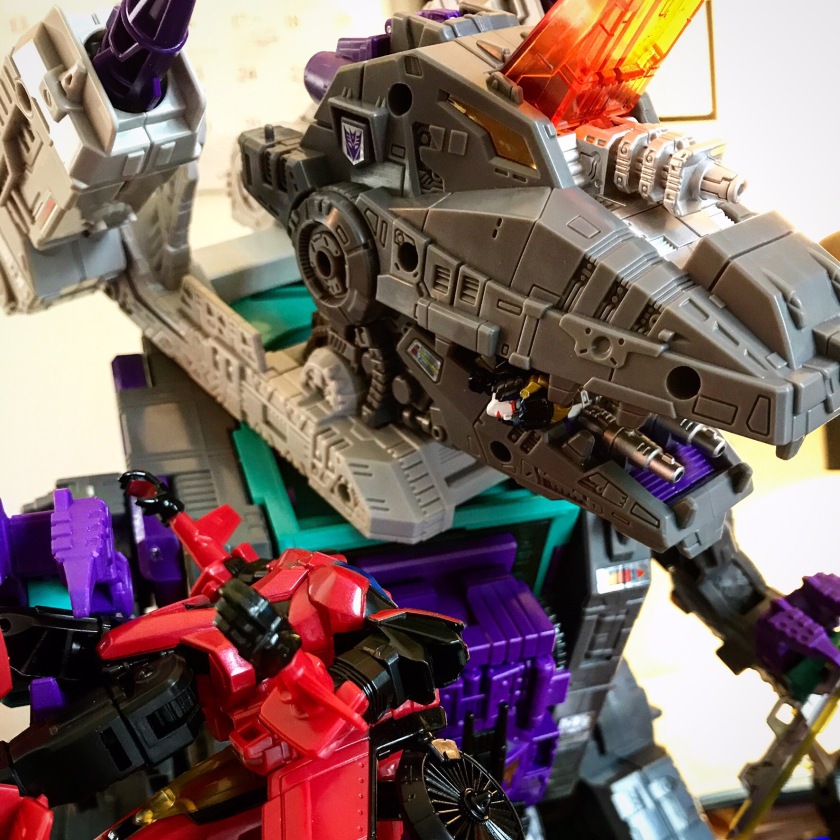 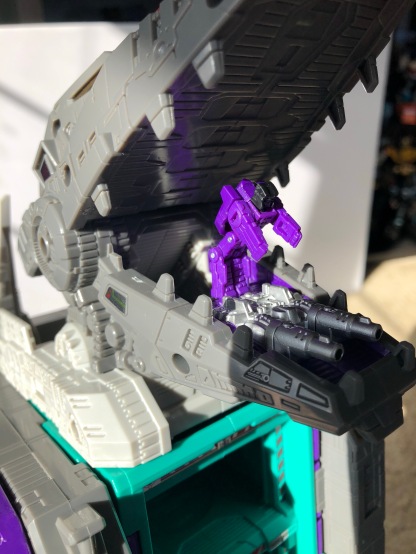 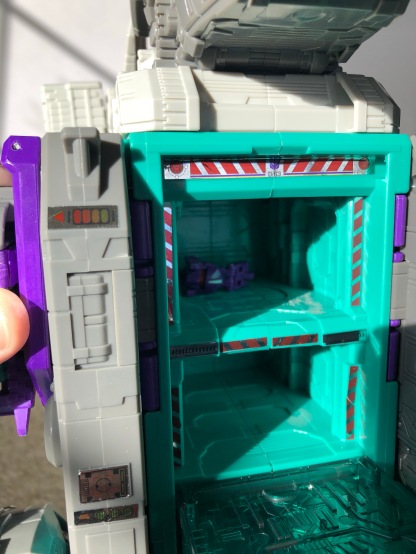 It’s a brilliant way to incorporate the “play theme” of the line.  According to his bio, eating the Titan Masters allows Trypticon to obtain their powers, so basically it’s his beer.

Trypticon brings back his three modes.  He has added posability to his Dinosaur mode in the hips, knees and little T-rex arms.  His neck/collar still functions nearly the exact way the G1 toys did, but that does allow for side to side movement.   His battle station mode is now dubbed battle ship mode and in another brilliant move, they’ve dubbed it the Nemesis.

Basically the legs now fold under and he’s given wings (albeit little ones).  Still I love this move.  Both Fortress Maximus and Metroplex have battle ship modes so this allows the potential for an epic space battle if you’re 12 or 35 and still play with toys in your home office.  *ahem*.

There are plenty of added details as well which is nice. 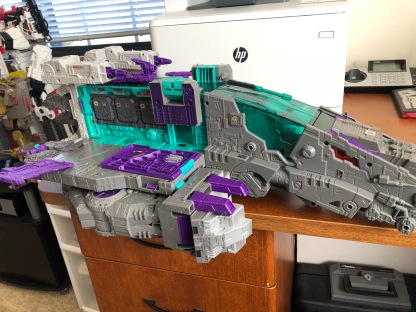 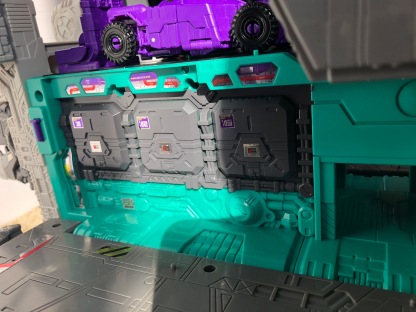 City mode is essentially the same, minus all the junk you had to pop off and on from the G1 toy to form towers and/or Brunt. 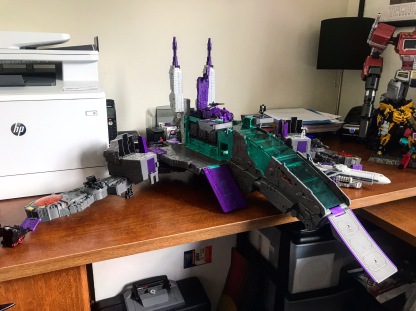 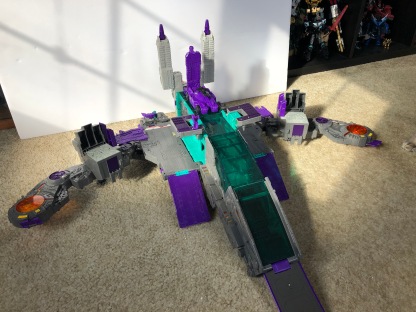 I love it though.  It’s massive and there’s tons of room for smaller toys all over the place.  Now of course the big feature on Leader class figures is that they can connect to Trypticon via tabs at the end of the out stretched ports on either side of the city. I didn’t take pictures of this but I should have.  Maybe I’ll add them in later. 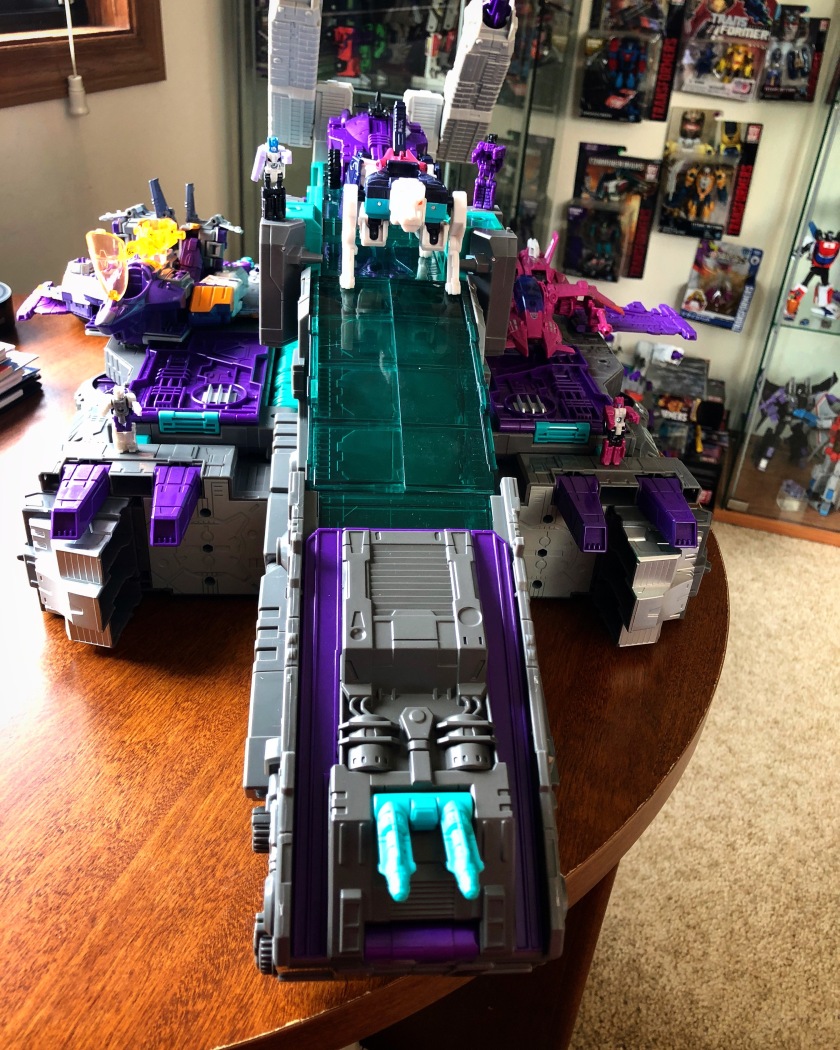 I mentioned Brunt isn’t a thing anymore.  If you don’t remember, he was the little battle tank/gun and tower emplacement stuff from the G1 toy.  Not a huge loss.  We do get Full Tilt however, and he’s a beaut.  Designed as a full fledged deluxe toy, with no corners cut, he’s solid, well designed toy with some real weight behind him. 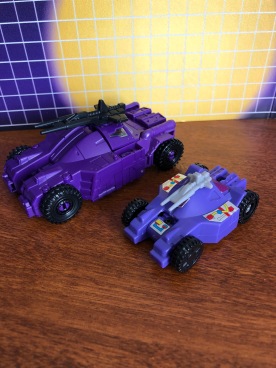 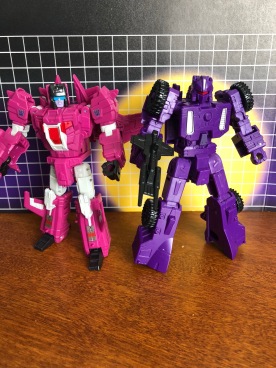 His head is also a Titan Master called Necro.  So basically he comes with the Necro-bot.  COOL.  Necro also pops into a spot behind Trypticon’s head to pop out the forehead horn/gun, which is a brilliant use of the toy line’s feature.

Obviously you should have this toy if you’re a collector of anything post-G1.  It’s a great addition to the line and a ton of fun.  HOWEVER – given the identical nature of the two versions, there is NO REASON whatsoever to buy the Takara release unless you’re an obsessive completionist.   There were the initial reports that Hasbro’s hip springs caused damage or something.  I had no issues on mine, and the Takara version seems perfect as well so I can’t really speak to the problem.  Otherwise he’s as perfect a toy of Trypticon as you could really ask for, unless you’re stickler for having your Trypticons walk by themselves. 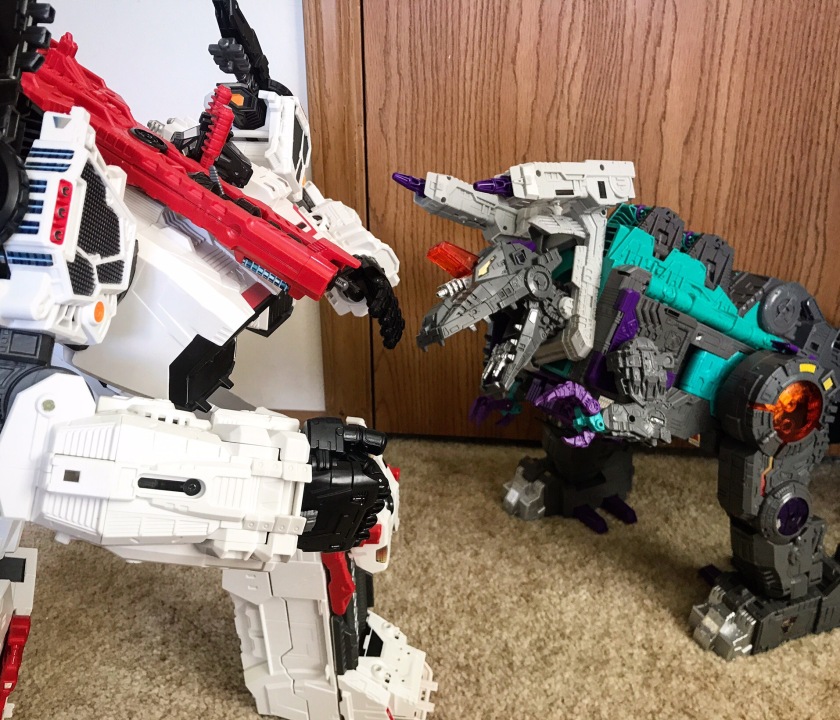 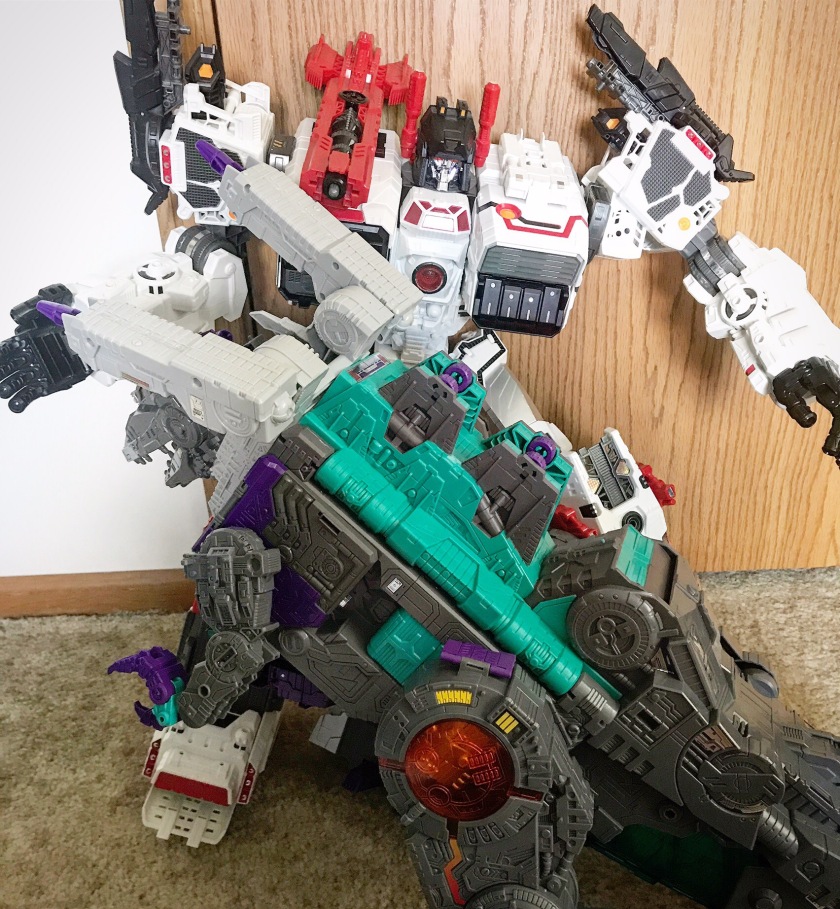 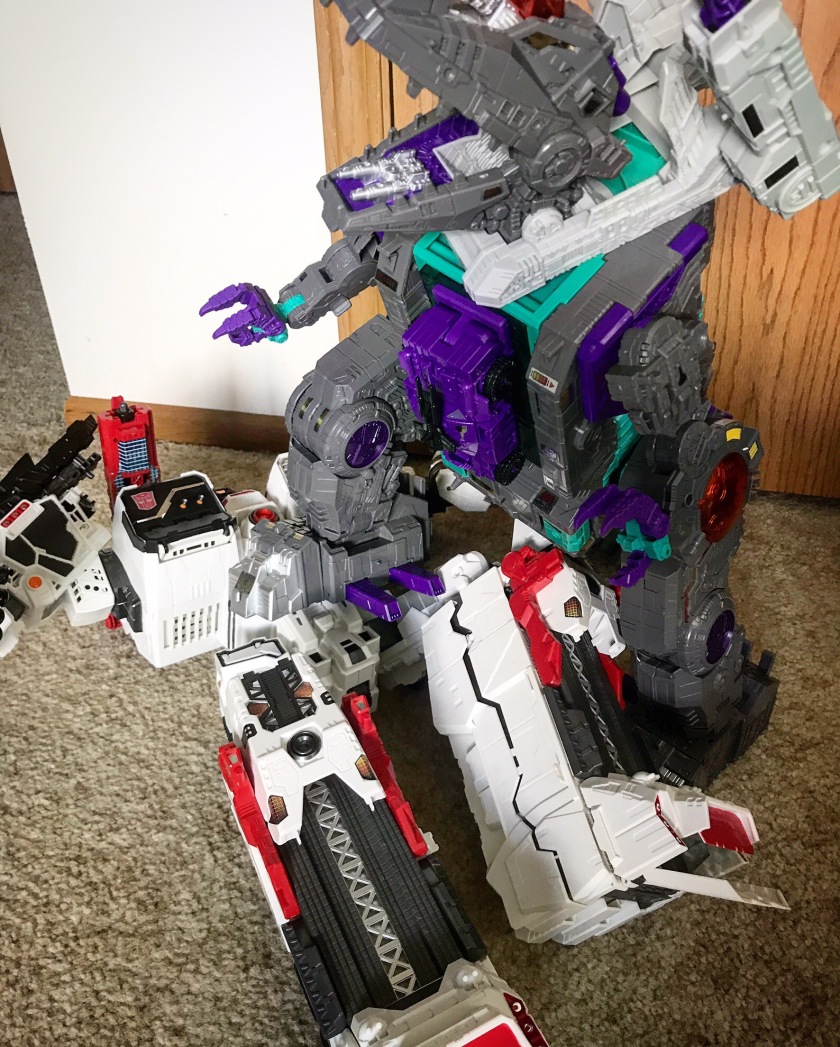