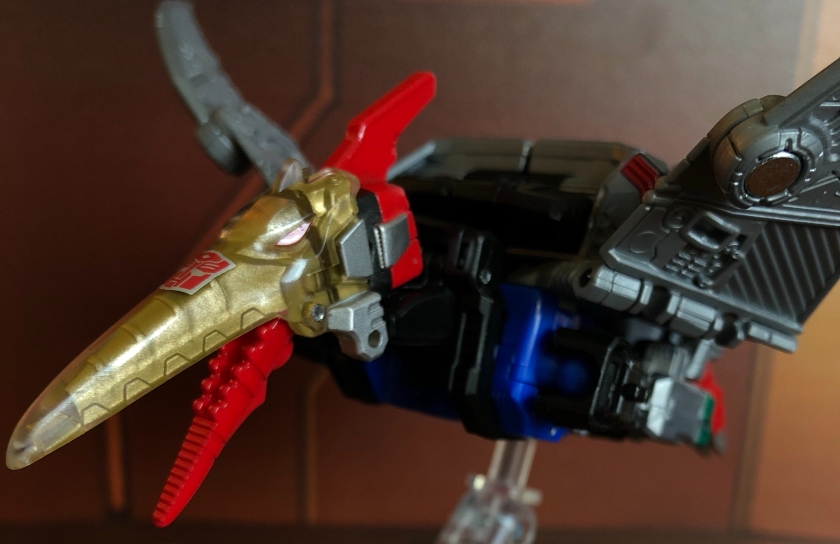 I really can’t believe I’m writing this post already, but over the last week, the Power of the Primes stuff starting creeping onto the shelves like silent ninjas.  So I guess, we’ll put everything else on the back burner and take a look at these dudes, starting with everyone’s (second) favorite Dinobot, SWOOP! 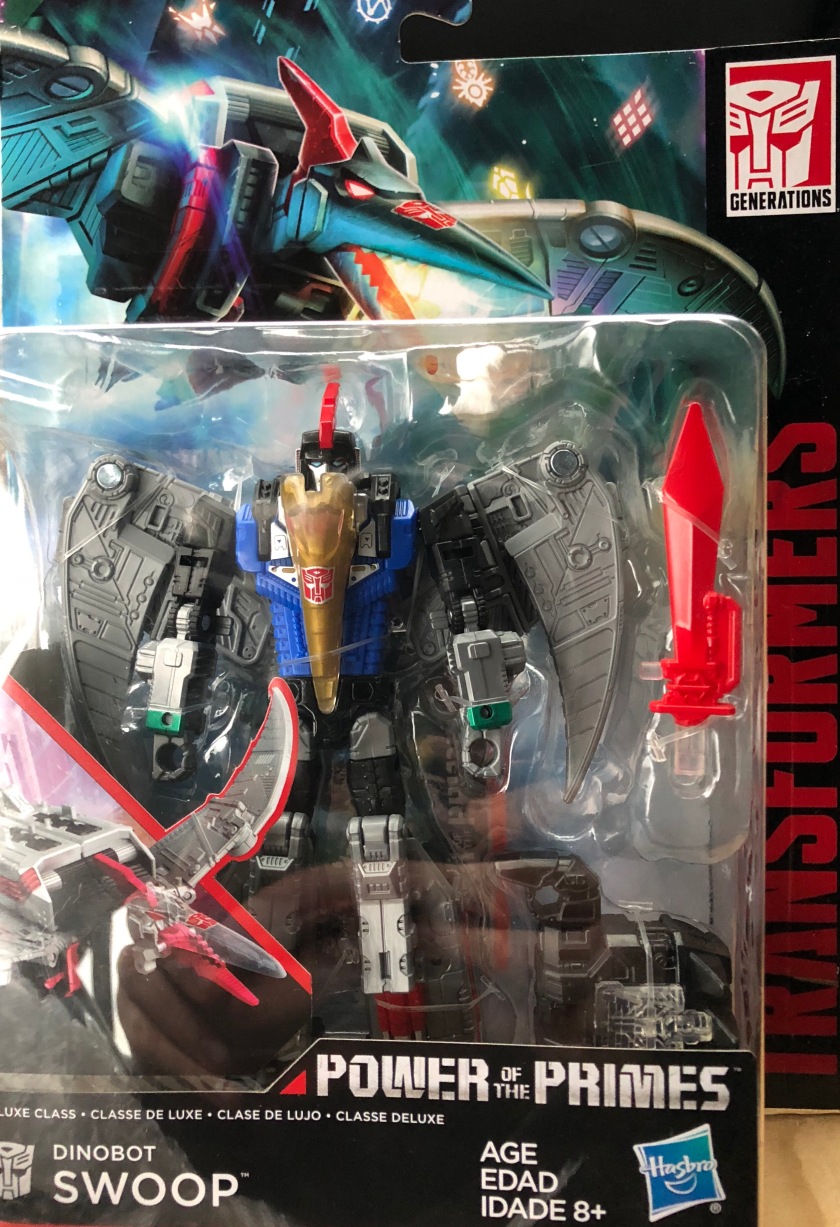 So right off the bat, its worth pointing out two things: 1.) Power of the Primes is the third and final chapter in the Prime Wars Trilogy toyline.  What that means going forward I have no idea.  2.) PoTP seems to be incorporating both Combiner Wars AND Titans Return features.  So that means we’re getting more combiners, including the Dinobots (more on this later) and the new “Prime Powers” are similar to the Titan Masters in execution. 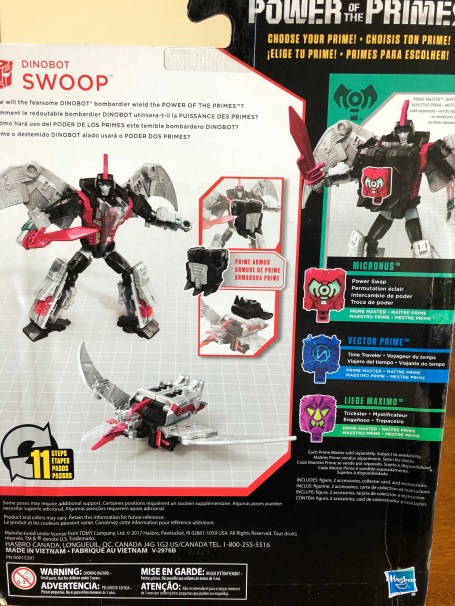 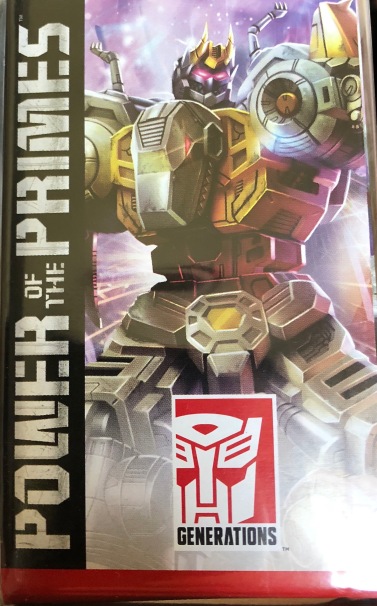 Side note: I kinda hope we also get a Red Chest version of Swoop at some point.

Swoop comes with a trading card, as is the new tradition, but apparently for every figure, there’s 12, TWELVE, variants, one for each Prime Power.  So as an example, my card is Megatronus Swoop. 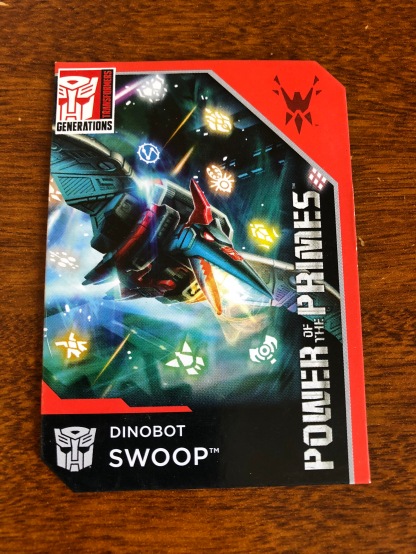 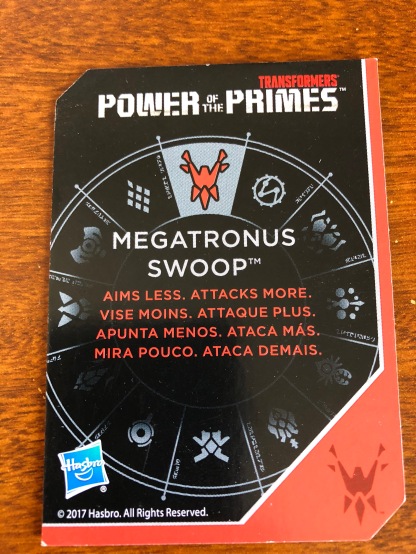 It’s an aggressively bold idea.  I love the trading cards, but in all honesty, its a dangerous concept, seems theoretically you’d need at least 12 swoops to complete the whole set, likely many many more.  So it’ll end up being a “search ebay for the ones you need and hope people don’t gouge prices on trading cards” sort of thing.

Swoop himself is a delight.  With his cartoon accurate bold blue chest, perfectly painted face and gun metal silver/grey he’s exactly what I’d want in a Dinobot update.

Plus at this point you know I’m a sucker for tampograph detailing.  Everything feels solid, his hip and shoulder joints are nice and tight, soft-ratcheted elbows feel secure, and his head, even with the crest, still gets some range of motion on a ball joint. 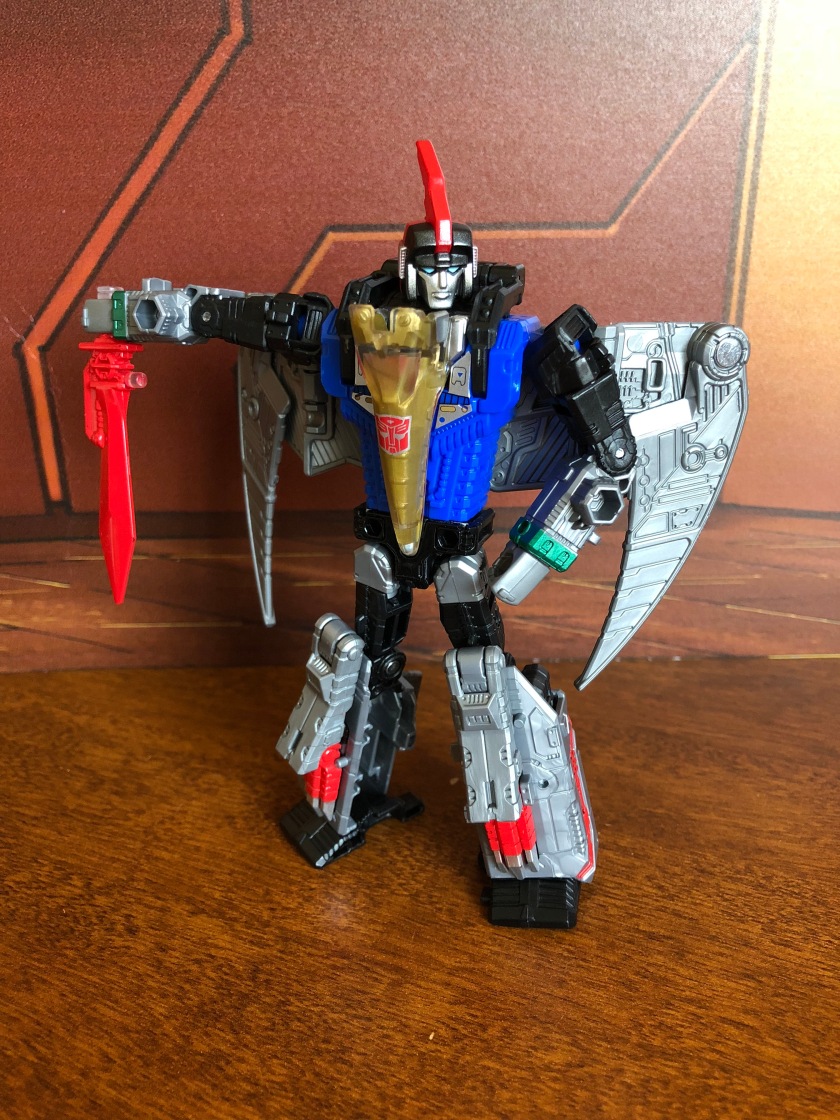 Naturally he comes with his Thermal sword.  He has great pose-ability to use it too.  He also comes with his Prime Armor.  Now this is where things get interesting.

The Prime armor is the H(and) F(oot)G(un) item for this line’s deluxe class toys.  It serves as both his armor, a shield and gun as well as the fist for combined mode. 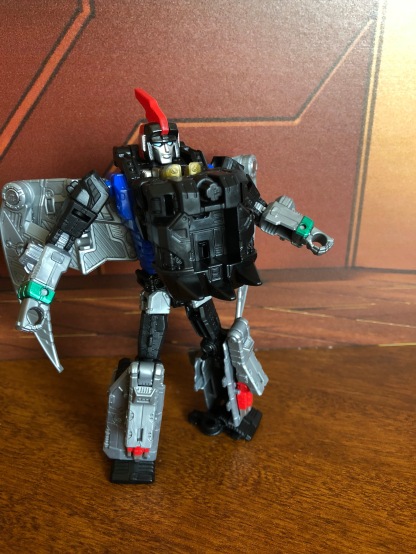 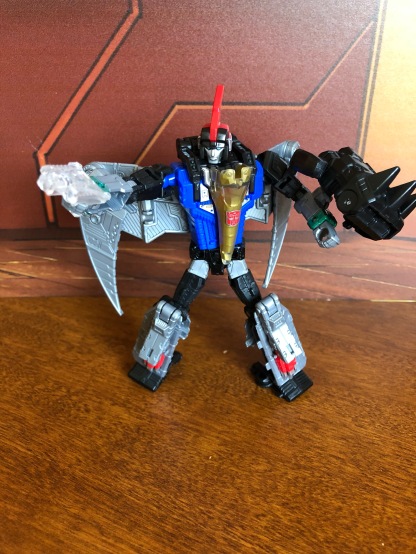 The clear panel pops out and is molded as a hand gun for Swoop, and the fist peg can port into his forearm for a shield.  The main feature though, is that you can plug in a Prime Power piece into the center of the armor and give Swoop various attributes (i.e. Megatronus as stated in his bio card). 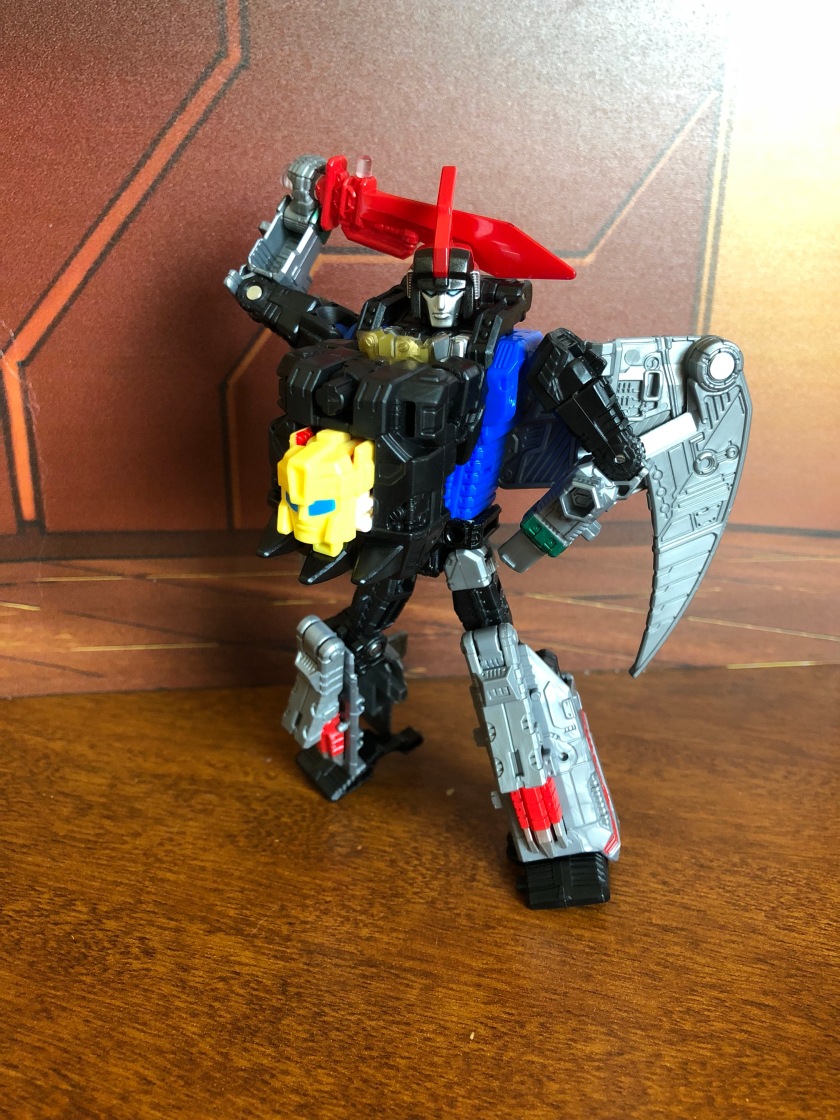 Before you ask, yes, the Titan Masters fit.   I’m not super wild about the execution of this feature.  I think it’s fun and really, it is a great idea, but the armor ends up looking very goofy (at least on Swoop) and while it’ll look better when the center part isn’t a face sticking out, I just feel like I will spend very little time utilizing this. 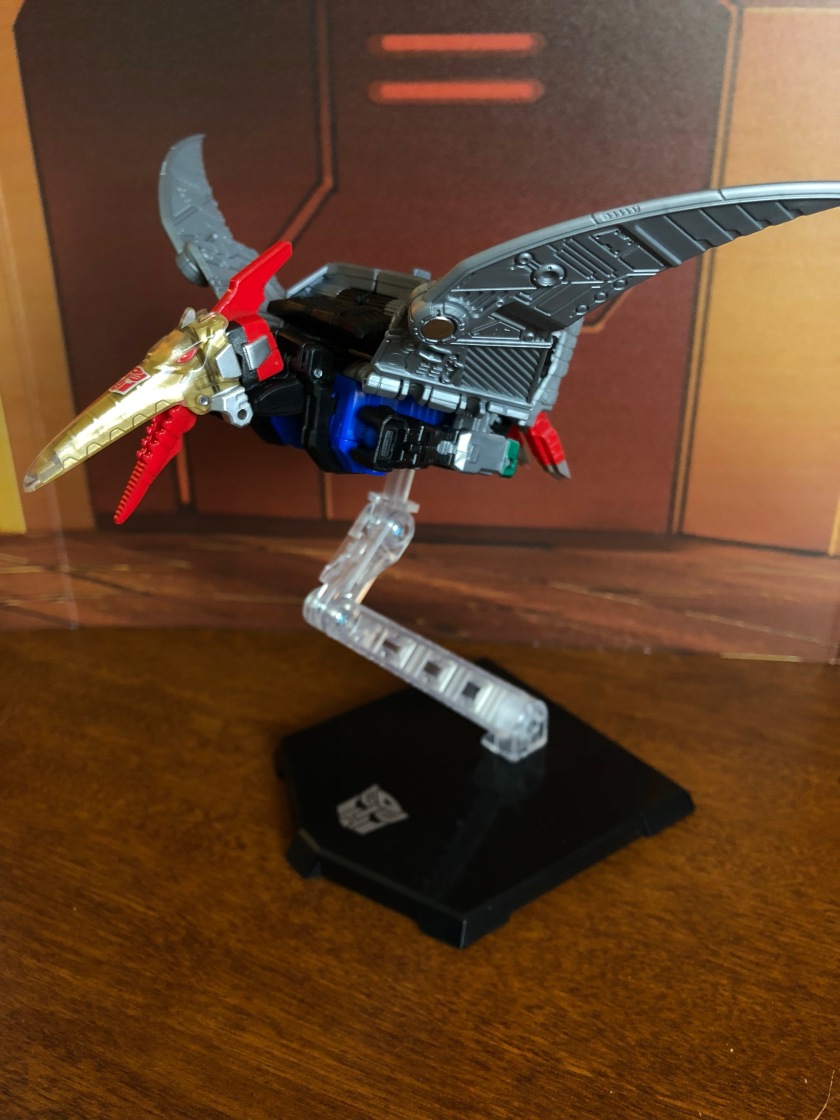 Transformation is G1-similar.  His robot legs fold up behind him and lock the wings into position.  his Pterodactyl head swings up to cover his robot face, literally exactly how the G1 toy did.  It doesn’t even peg into place, it just swings up.  It sits there, it’s solid, it doesn’t wobble or wiggle.  It’s awesome. 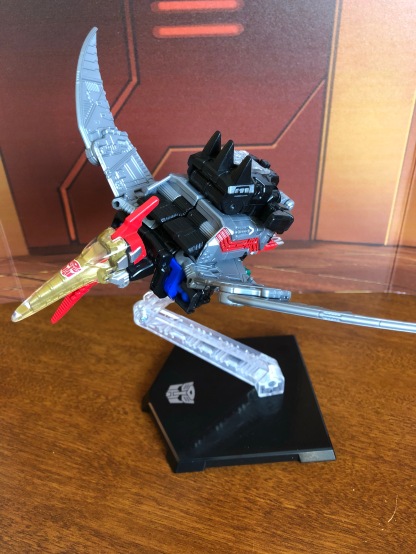 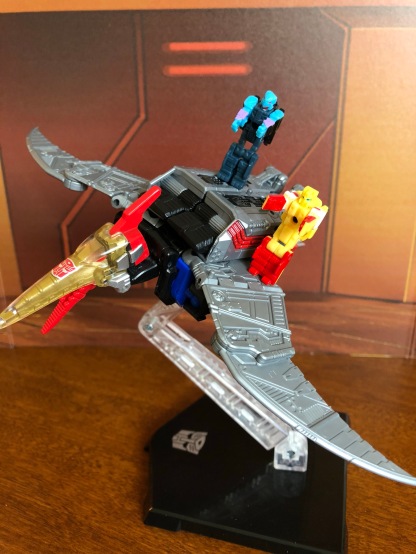 His back features two tabs for the Prime armor to peg onto, which look better than it does on Robot Mode, but he also features plenty of Titan/Prime Master pegs for the tiny dudes to hitch a ride on.  FUN! 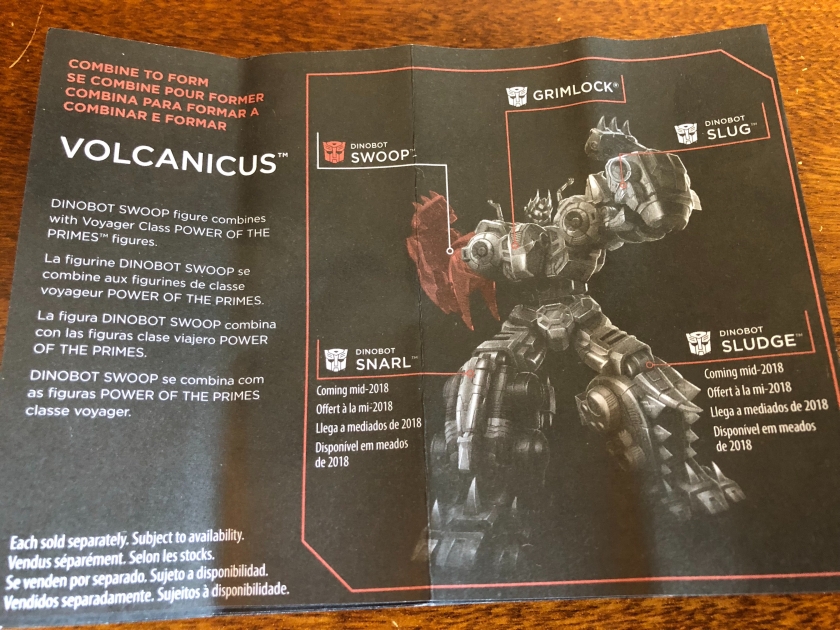 Okay, finally there’s combined mode.  Let me start off by saying I 100% do NOT want Dinobots to combine.  I don’t understand the fan obsession about it.  They combined, maybe once, that I can think of in an offshoot stand alone comic that was basically a fatal last stand and the combiner was a monstrosity.  I don’t like the idea in general.  But here we are, getting a Dinobot combiner named Volcanicus.  I don’t like that name either.  Look, I know I usually cheer-lead this kind of thing, but it just feels goofy to me.   That being said, we’ll take a look at Swoop in both modes.  His legs actually feature collapsing joints akin to Combiner Wars Breakdown/Wheeljack, which is impressive seems  you don’t know it’s there until you need to use it. 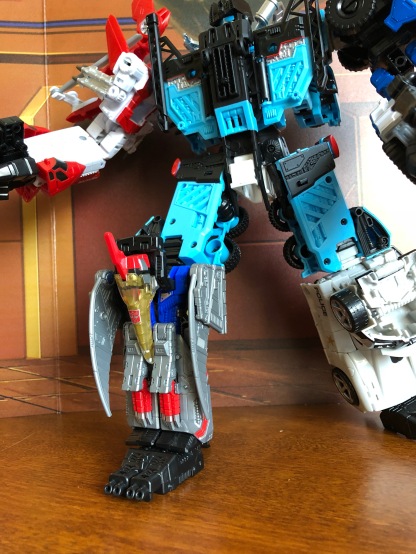 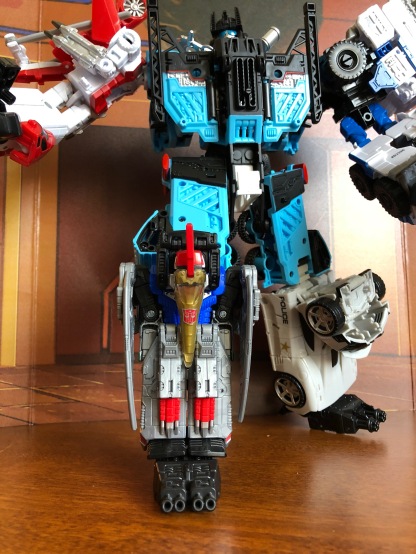 I’m not sure if Snarl and Sludge will come with different HFG/Prime Armors, but the one Swoop comes with doesn’t seem to lend itself to being a foot.  There’s no way to plug it into Swoop’s connector peg hold, so I suspect they will.  He makes a solid leg, compact and stable.  The combiner joint is identical to what we’ve seen with Combiner Wars. 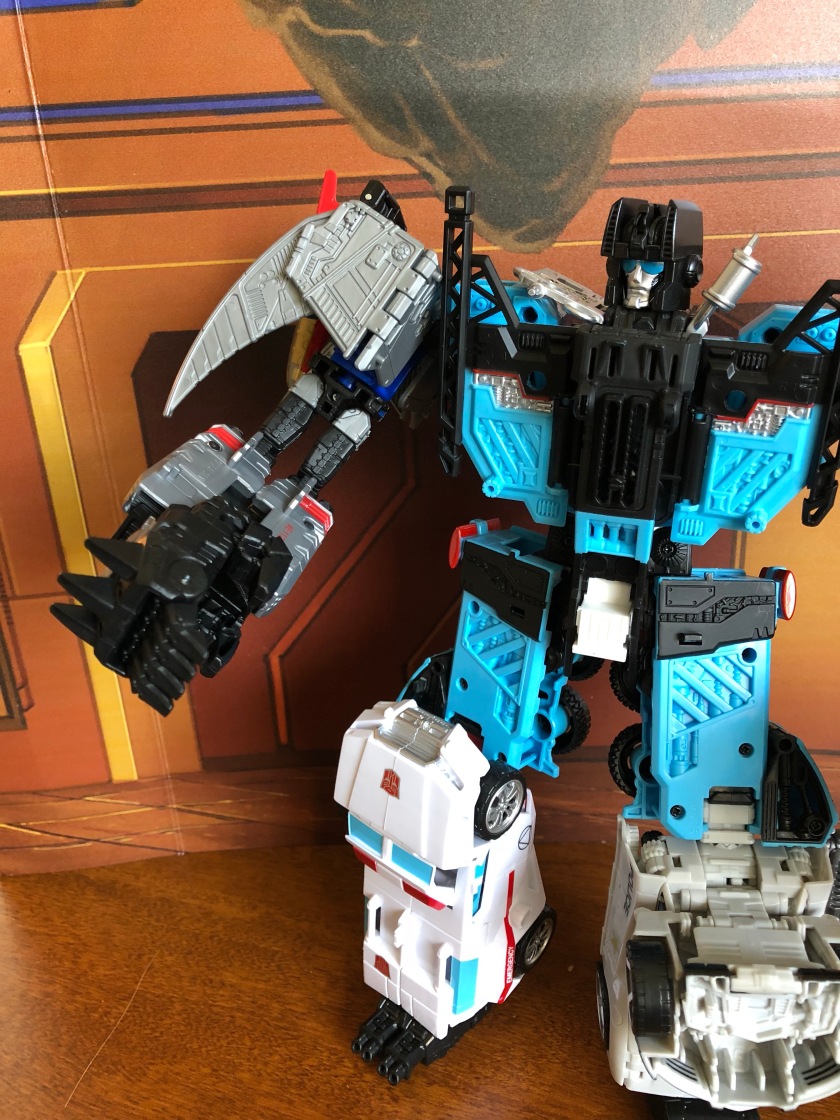 The combiner hand has similar fingers, that fold out, however, because of the way it attaches to Swoop as armor, it features two thumbs, which looks…odd. 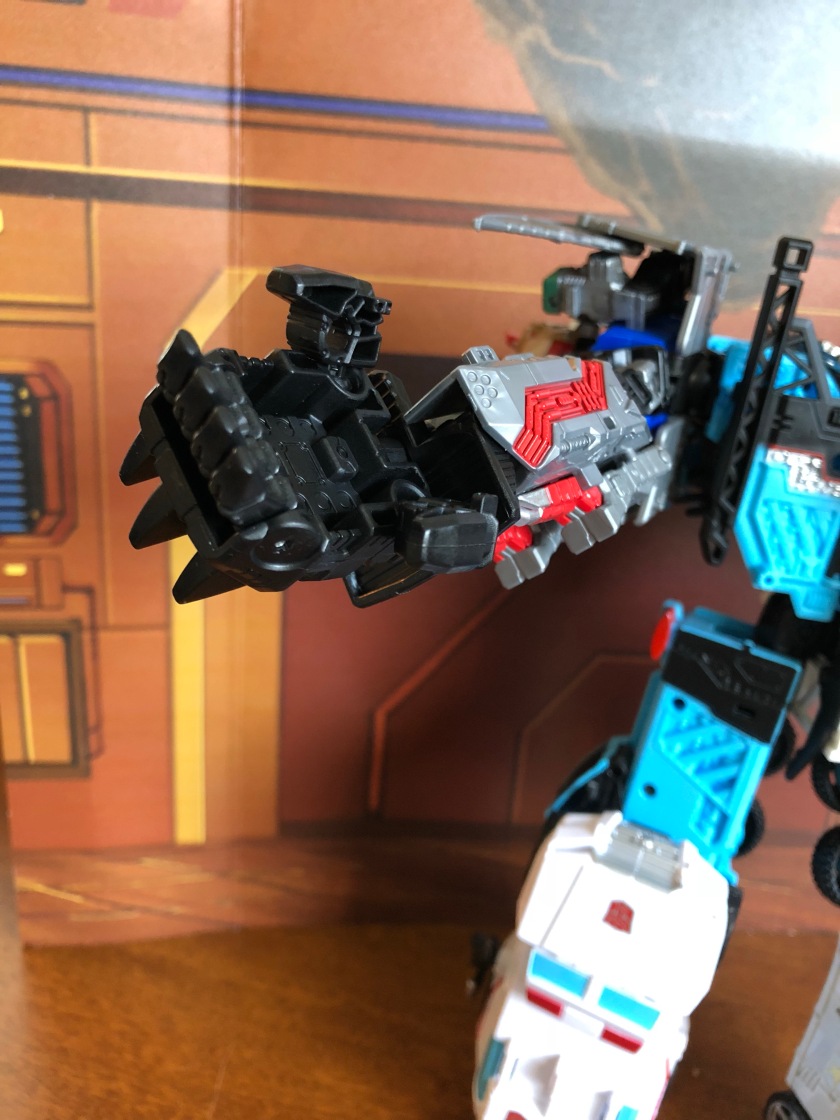 Unless I’m missing something and there’s a way to fold it away, I’m not 100% clear.  It’s not in the instructions so if someone figures it out let me know.

Bottom Line: We needed new Dinobots.  The last version of any of them we got other than the semi-ok-but-not-really Age of Extinction versions was Fall of Cybertron Grimlock, who’s neat but is seriously lacking in certain areas.  Swoop is an excellent next-gen update that retains the fun of the G1 toys while giving him a fully functional robot mode.  The combiner aspect, at least for me, is a far less important aspect that can be ignored if you so choose.  By himself Swoop is a fantastic toy and should be picked up without hesitation.