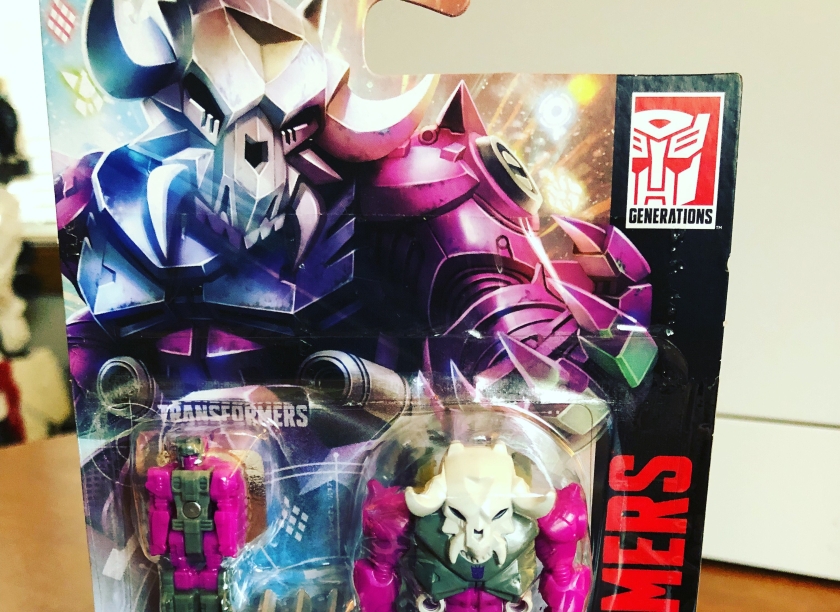 We’re gonna keep riding the Power of the Prime Train a bit, I’m still behind, but I want to keep at least one post a week going.

So this one of the first of three Prime Master toys from he Power of the Primes line.  Liege Maximo.  Or Skullgrin.  It’s a bit ambiguous as to who or what these guys are intended to be, other than in the Toyline fiction, they contain a piece of the spark of one of the thirteen original Primes.   Liege Maximo, back in the day, was supposed to be the foil to Primus, but now he’s got more of an innocuous “Trickster” description on the box. 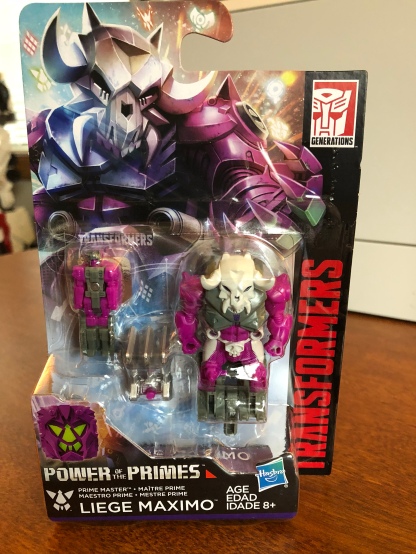 To simplify things in my head, I’m saying these dudes are pretenders, that have a fragment of the Prime spark and like the Titan Masters can give extra power to other guys.  Good?  Great, let’s move on.  So here’s Skullgrin.  I have to say right away, I love the packaging.  The little window in the back shows the Prime icon on the inner robot. That’s such a great touch. 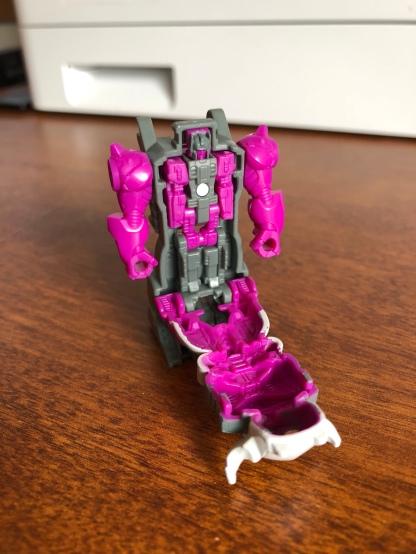 So Skullgrin, or Liege Maximo, whatever you want to call him, is molded after Skullgrin’s G1 Pretender toy and functions the same way.  Basically the little Prime Master Robot (the G1 Molding detail is incredible on him, he even has tiny treads on his legs) fits into his Pretender Shell or “Decoy Armor”.  The shell then functions as an action figure with articulation at the shoulders, exactly like the old toy, only much MUCH smaller.

I love this idea.  Look Pretenders are somewhat polarizing, some people loved them, some people hated them.  I think this is a brilliant way to incorporate them into the new toy line, while remaining benign enough that if it’s not your thing, you can skip them entirely.  Toy-wise, it’s a great take on the play-feature established with Titans Return, giving the individual little dudes a vehicle (or Armor) so that they retain playability while also being incorporated into the bigger picture.  Also, look at the detail sculpted on Skullgrin’s body! 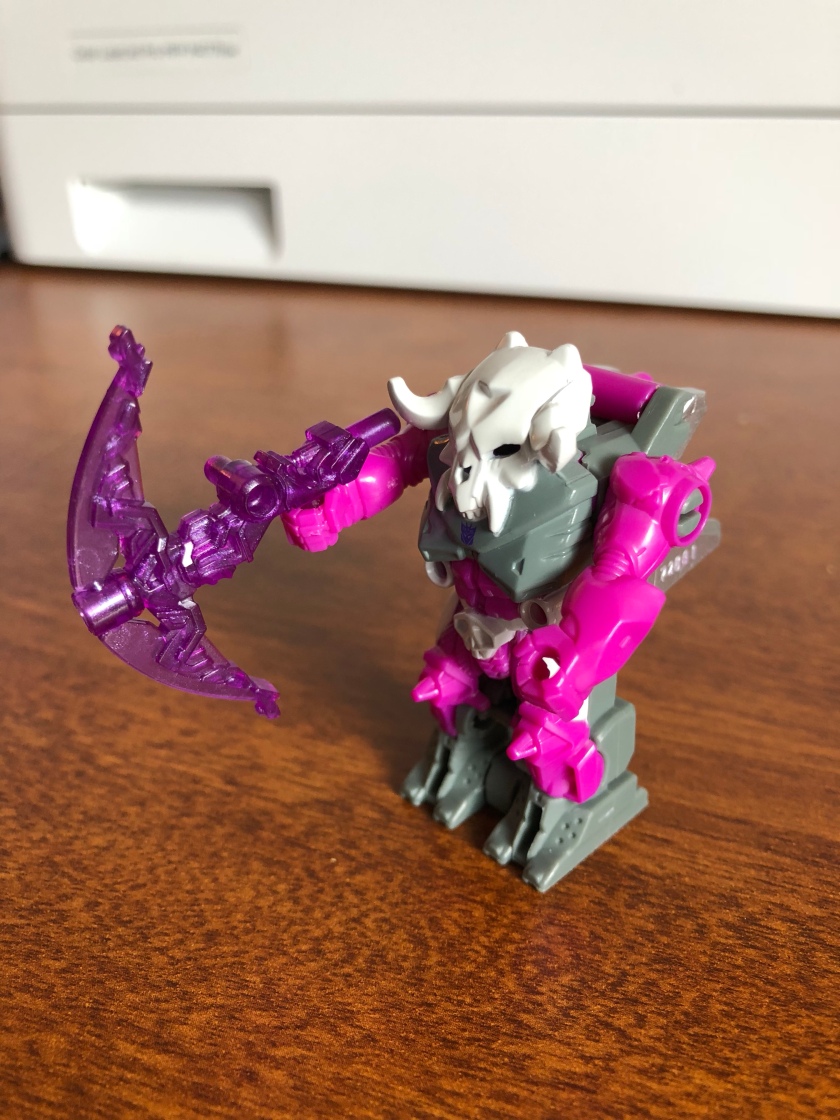 The fists on the armor can hold either the weapon they come with, or if you have Cyberverse toy weapons lying around you can give him those too.

Much like the Titans Return toys, the Prime Masters also transform into a weapon which is held by a 5mm post that folds out, and the inner robot transformers just like a Titan Master, but into a Prime Spark, which is then plugged into any deluxe Prime Armor.  They’ll also work with Leaders and will plug into the chest (like Optimus’s Matrix).   I’m looking forward to that for sure.  I’m not sure if they’ll work on Voyagers or not.  I feel like they will, somehow.

In terms of size, they’re pretty small, but again I kind of love that.

Bottomline: they’re a relatively inexpensive, small toy that work great for those of us who enjoyed Pretenders, yet can be skipped if it’s not your thing.  I would certainly recommend picking up a few though, just because of the cross-scale functionality, but also they’re really neat! 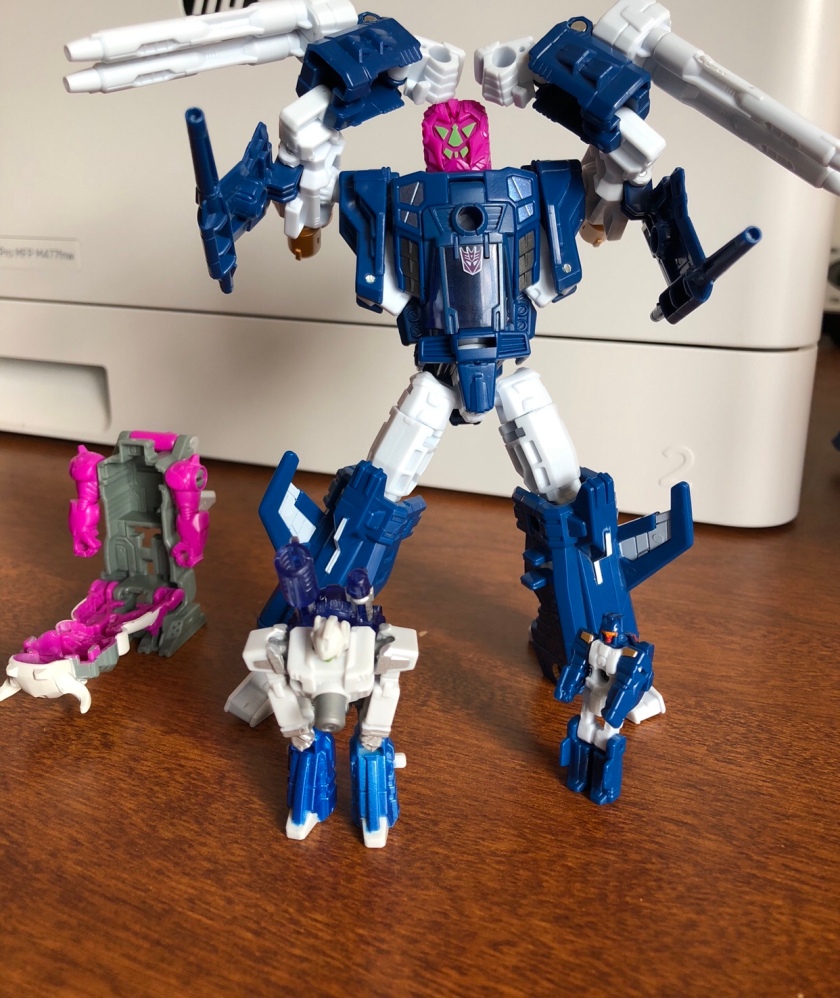