With SDCC 2018 going on this week, and the new toy line announced (See the Facebook page for pictures!), it’s been super hard to keep focused.  Luckily several new additions arrived this week, so let’s take a look at the new Power of the Primes: NEMESIS PRIME!

The funny thing is, Optimus Prime is still in his box, in a pile of toys I have to get to.  I’ve been swamped with work and I like to “save the best for last” so I’ve been working through the back log.  When Nemesis arrived though, I couldn’t help but crack him open right away. 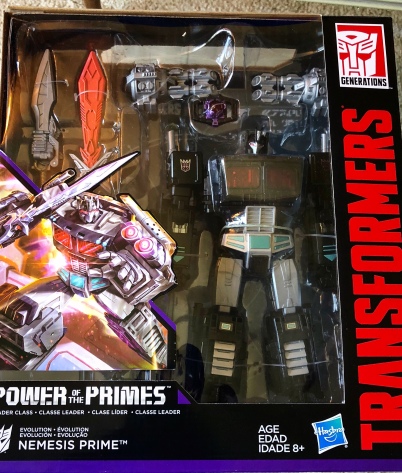 Nemesis comes in the usual packaging, with a brief bio and interestingly enough – his “lesser” form is named Nemesis Pax.  I would have thought they would have called him  Scourge, but either name works.  Of note, he does not come with a trading card.  I’m not sure if the included cards will come to an end with the Power of the Primes line or not at this point. 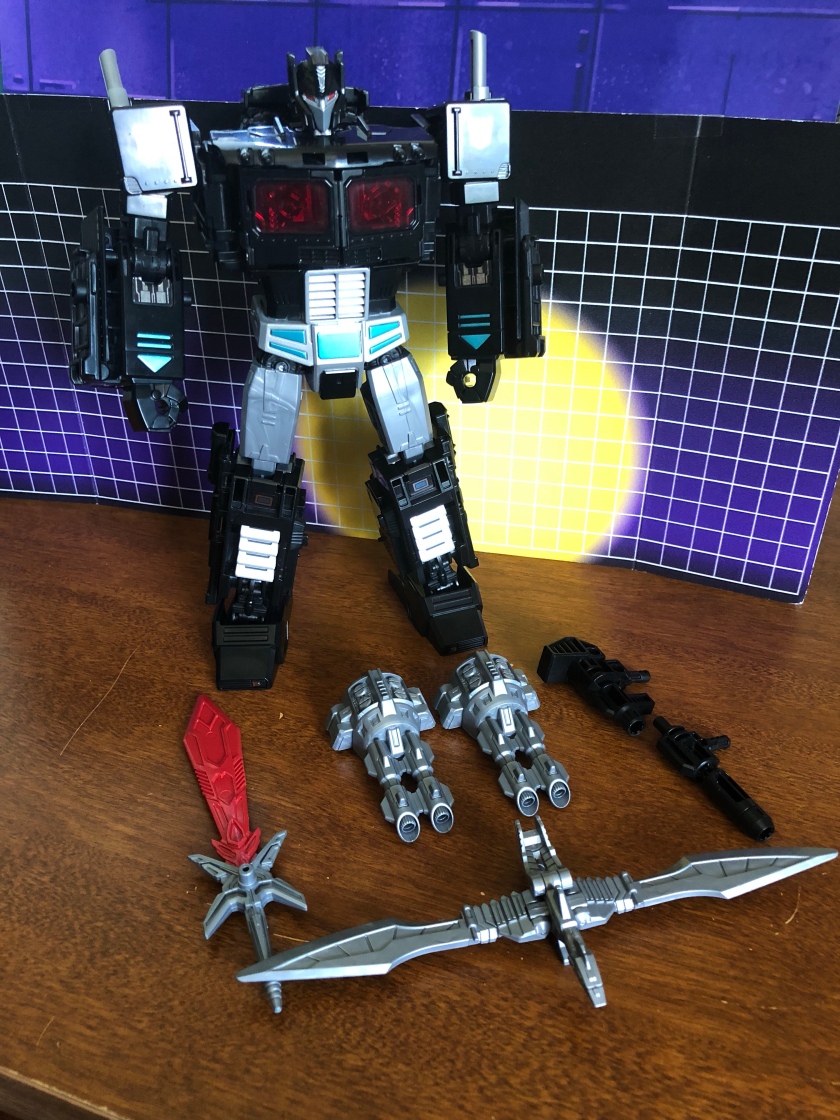 Unlike Optimus, who comes with just his Ion Blaster and the Matrix of Leadership, Nemesis here comes with a bunch of accessories.  He also has an Ion Blaster, but also comes with dual forearm cannons that match his Armada origins, the Dark Saber which is wicked looking and of course, his bird pal, Giza, who transforms into another sword for Nemesis to use.  He’s packing a LOT of heat.

He also includes the Dark Matrix, a powerful relic from the Dead Universe.  (Or something like that, there’s actually a bunch of different version of the “evil” Matrix).

Naturally any Prime Master can fit inside the Matrix frame but its hard to swap out such a perfect central crystal for anything else.

I was told people had stability issues with their versions, but I honestly ran him through the ringer and had no problems at all.  He’s surprisingly well balanced and other than my ankle tilts being a touch on the loser side of solid, his feet and ankles are very secure. 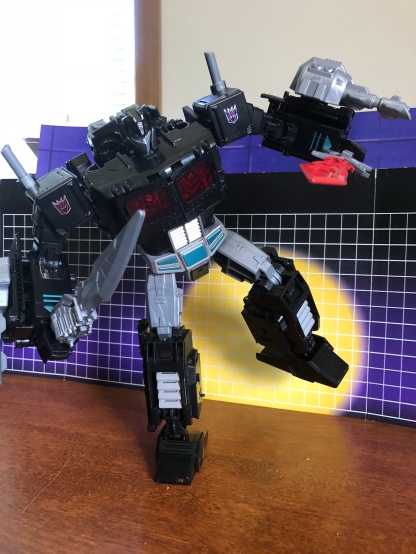 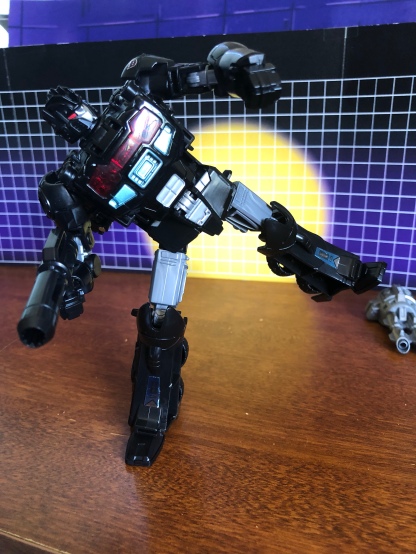 Like the rest of the Leader Class toys of this line (of which I’m realizing I’ve reviewed zero of them…), the main body is actually removeable armor.  The central core figure (in this case, Nemesis Pax) detaches and becomes its own smaller toy. 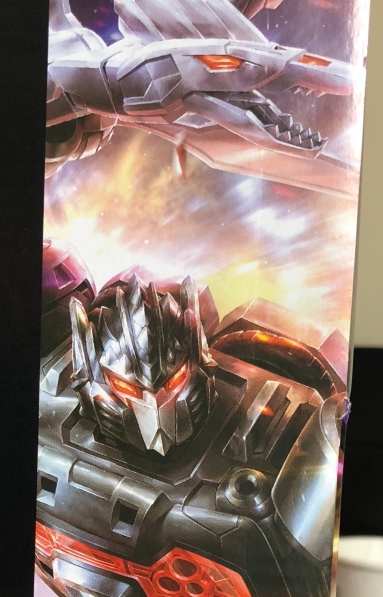 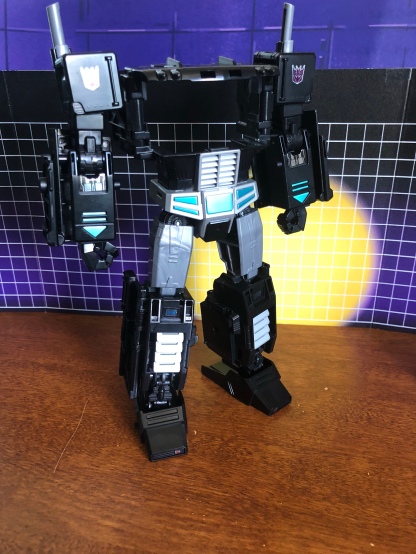 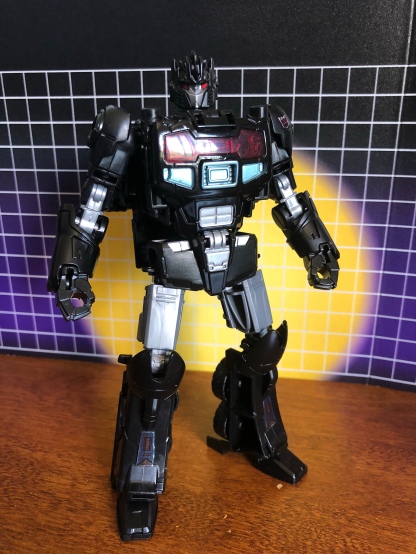 N. Pax transformers into a Semi Truck Cab, whereas the armor/larger body forms the Semi Trailer.  It’s a neat way to incorporate the two versions of the character and functions really well.  Admittedly the Cab isn’t perfect, mostly due to the arms basically tucking around behind, but once the trailer is added on, it works a lot better.

All of Nemesis’ weapons can store in Semi mode, which is nice.  It did take me a while to figure out that the forearm panels fold out on the trailer to allow the cannons to attach.  I didn’t see this indicated in the instructions (though I could have missed it.)

Nemesis Prime remains a rather niche character that not everyone has a strong affinity toward.  Due to the sheer number of accessories and the over all fun design, I have no problem recommending him.  He does have some cons though: The stickers remain an issue as they tend to peel at the edges.  Mine aren’t too bad, but in a few spots they’re a bit rough.  Also, and this is minor, some of my joints are too tight which can be a little nerve-wracking when first learning what opens and what folds, etc.  Otherwise he’s another great edition to the line and makes me even more excited to crack open Optimus! 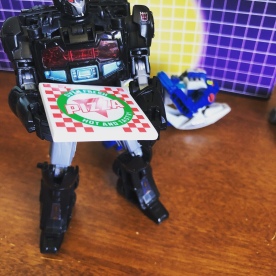